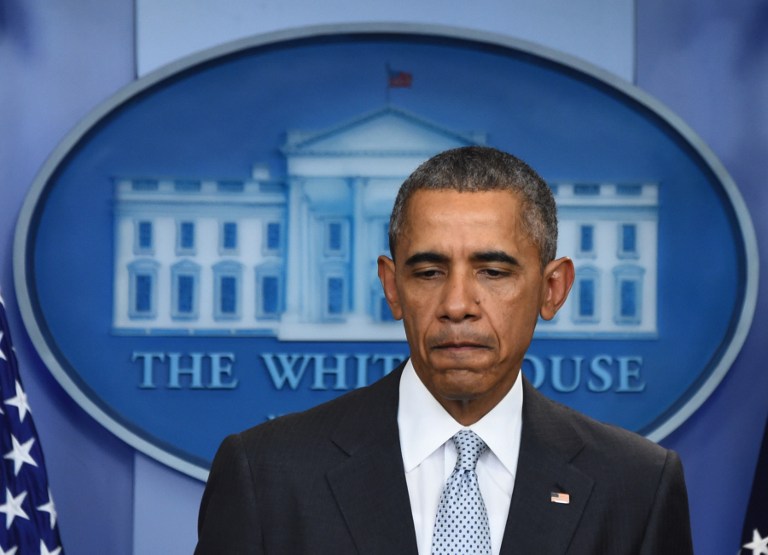 US President Barack Obama looks down as he speaks to the press in Washington, DC on November 13, 2015, after being informed about a series of deadly attacks that rocked Paris.

WASHINGTON - US President Barack Obama led a chorus of global condemnation of attacks in Paris that killed more than 100 people Friday, as nations pledged solidarity with France and vowed to help hunt down the perpetrators.

The shootings, explosions and a hostage-taking at a popular concert venue in the French capital reverberated around the world, especially in countries such as the United States, Britain and Spain, previous scenes of devastating acts of terror.

"It&39;s an attack not just on the people of France. But this is an attack on all of humanity and the universal values we share," Obama said in an address at the White House.

"We&39;re going to do whatever it takes to work with the French people and with nations around the world to bring these terrorists to justice and to go after any terrorist networks that go after our people."

In London, where 52 people were killed and hundreds wounded in a series of coordinated suicide bombings on the city&39;s public transport system in 2005, British Prime Minister David Cameron said: "We will do whatever we can to help."

One witness said an attacker at the Bataclan music venue yelled "Allahu Akbar" (God is greatest) and fired into the crowd at the concert given by US rock band Eagles Of Death Metal.

"All of this confirms that we are facing an unprecedented challenge, a hugely cruel challenge," Garcia Margallo told public television TVE in Spain, scene of the 2004 Madrid train bombings that killed 191 people.

"As a country that knows very well the manner and consequences of terrorism, we understand perfectly the suffering that France is experiencing now," he said. Last month, twin bombings on a peace rally in Ankara killed 102 people.

European Union foreign policy chief Federica Mogherini tweeted that she was "in the process of following with pain and dread the events in Paris."

"Europe is with France and the French people," she said.

- &39;Appalled and outraged&39; -In Israel, Prime Minister Benjamin Netanyahu said his country stood "shoulder-to-shoulder" with French President Francois Hollande and the people of France in what he called "our common battle against terrorism."

Since the start of October, Israel has been faced with a wave of Palestinian knife, gun and car-ramming attacks.

In Asia, where people woke up to the news from Paris, Singapore Prime Minister Lee Hsien Loong said on Facebook that he was "shocked."

"It is not the first time innocent civilians have been massacred like this in this troubled world. But each time it happens we again feel appalled and outraged beyond words, for an attack like this is in fact an attack on our shared humanity," Lee said.

In Washington, Obama pledged to work with France to bring those responsible to justice.

"We are reminded in this time of tragedy that the bonds of liberte, egalite, fraternite are not just the values French people share, but we share," he said.

"Those go far beyond any act of terrorism or the hateful vision of those who perpetrated the crimes this evening."