Obama turns up pressure on Putin over Syria 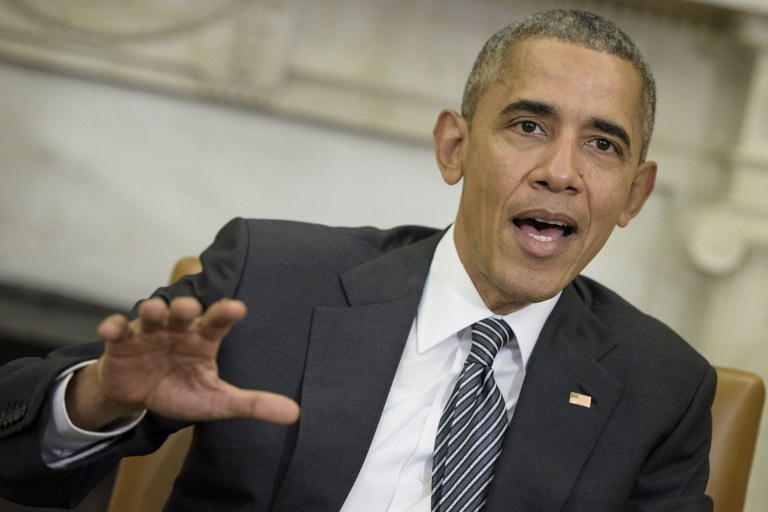 Obama said Russia risked casting itself as an "irresponsible actor" on the world stage, after meeting with top aides at the Pentagon.

Eyeing a looming humanitarian catastrophe in Aleppo -- the besieged northwestern city of 250,000 people that was once Syria&39;s commercial hub -- Obama said it was "time for Russia to show that it is serious" about bringing peace.

President Obama: "I&39;m pretty confident that a big chunk of my gray hair comes out of my Syria meetings" https://t.co/hSMq4TuZdE

For five years Russian President Vladimir Putin has steadfastly supported the regime of Bashar al-Assad, offering international cover, military aid and in the last year carrying out its own strikes in anti-Assad areas.

Without material Russian and Iranian support it is doubtful Assad could have held on to power.

Putin has shown little sign of ending that support through multiple rounds of international talks.

"I&39;m not confident that we can trust the Russians or Vladimir Putin," Obama said. "Which is why we have to test whether or not we can get an actual cessation of hostilities."

The United States hopes renewing a failed ceasefire would prevent a bloodbath in Aleppo, allow humanitarian aid missions to resume and open the door for negotiations that would end the civil war and turn the focus to defeating the Islamic State.

The White House is betting that Putin&39;s preoccupation with Russia&39;s position on the world stage could lead to a rethink before he travels to the G20 in China and UN General Assembly in New York next month.

Putin&39;s decision to annex Ukraine&39;s Crimea and support separatist forces in the east of that country have led to international sanctions and to Russia being expelled from the G8, much to the Russian leader&39;s chagrin.

If the renewed ceasefire does not stick, Obama said "Russia will have shown itself very clearly to be an irresponsible actor on the world stage that is supporting a murderous regime, and will have to answer to that on the international stage."

As reports surfaced of a Russian raid killing two Syrian children and wounding dozens at a refugee camp near Aleppo, Obama said "Russia&39;s direct involvement in these actions over the last several weeks raises very serious questions about their commitment."

But it is not just Russia&39;s reputation that is on the line in Syria.

By using chemical weapons, Assad crossed what Obama had said would be a "red line" -- only for the United States to never follow through on any attack.

Critics accuse the Obama administration of failing to stand up for its allies and failing in its duty to protect innocent civilians from withering bombings.

As the country has fallen apart the Islamic State, Al-Qaeda affiliated groups and other assorted jihadists have flourished and a refugee crisis has destabilised the region and Europe.

Obama&39;s political foes have accused his policies of leading to the growth of the Islamic State into a group that now carries out attacks in the United States and Europe with regularity.

Obama, who came to office promising to end the wars in Iraq and Afghanistan, has hit the Islamic State with airstrikes and commando raids, but has steadfastly refused to bomb Assad or start another ground war in the Middle East.

On Thursday he admitted that Syria had been one of the most testing issues of his presidency, which will end in January.

"I&39;ve been wrestling with this thing now for a lot of years," he said. "I am pretty confident that a big chunk of my grey hair comes out of my Syria meetings."

"There is not a meeting that I do not end by saying is there something else that we could be doing that we haven&39;t thought of? Is there a plan &39;F,&39; &39;G,&39; &39;H,&39; that we think would lead to a resolution of this issue."
After meeting with advisors at the Pentagon, Obama said the Islamic State group would "inevitably" be crushed and said the US-led coalition would continue to aggressively target the jihadists "across every front."

But "the decline of ISIL in Syria and Iraq appears to be causing it to shift to tactics that we&39;ve seen before -- an even greater emphasis on encouraging high-profile terrorist attacks, including in the United States," Obama warned, using an acronym for the Islamic State group.

The jihadists swept across vast parts of northern Syria and Iraq in 2014, leaving a trail of human butchery and horrific destruction in their wake.

Since then, the coalition has conducted daily plane and drone strikes -- more than 14,000 so far -- and worked with local forces on the ground to gradually reclaim the seized territory.

Despite the massive effort, the jihadists still hold Mosul -- Iraq&39;s second-largest city -- and the Syrian city of Raqa.