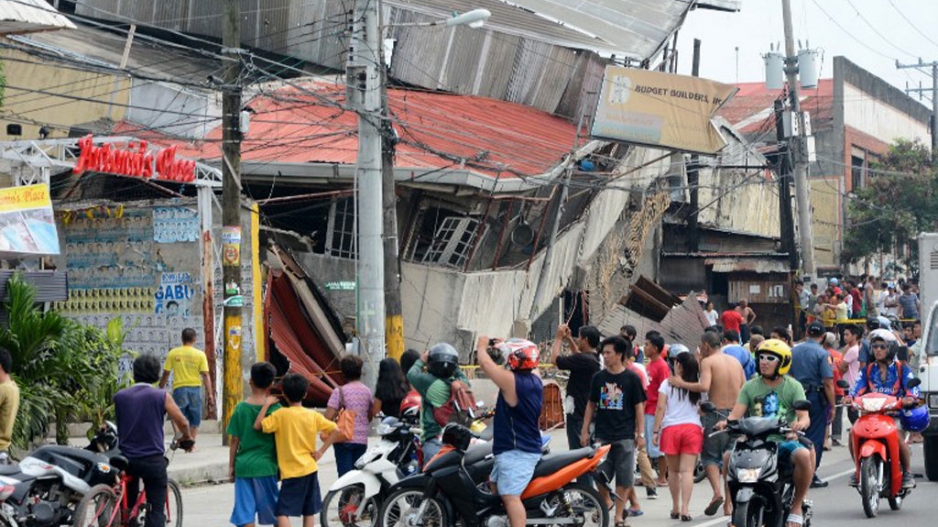 People gather on the street next to damaged buildings in Cebu City, Philippines after a major 7.1 magnitude earthquake struck the region on October 15, 2013.

MNILA, Philippines – A 6.5-magnitude earthquake killed at least one person in the central Philippines on Thursday, with at least five more people trapped inside a collapsed commercial building, officials said.

Rescuers pulled out six people from the three-storey structure in the town of Kananga, near the quake's epicentre on Leyte island, Kananga Vice Mayor Elmer Codilla told AFP.

"There are still more people inside, maybe more than five. The rescue operation is ongoing," he added. Two of those trapped managed to send text messages seeking help, the vice mayor said. Officials retrieved one dead body while six people were rescued without injuries, Codilla said.

Dominico Petilla, the governor of Leyte province, said rescue personnel, ambulances and heavy equipment have been sent to the mountainous town of about 50,000 people. "They're still trying to pull out the injured," Petilla told CNN Philippines television.

The 10-year-old building housed a small hotel upstairs and shops on the ground floor, officials said. The quake hit at a depth of around six kilometres (four miles), the US Geological Survey said.

There was no immediate warning of a tsunami, the Pacific Tsunami Warning Center said. Large parts of Leyte were devastated by super typhoon Haiyan in November 2013. Huge tsunami-like waves smashed the city of Tacloban and nearby areas, leaving 7,350 people dead or missing.

However, both were without power along with large sections of the island, they added.

Roy Ribo, an official with a farmers' organisation who was visiting Kananga, told AFP the commercial building was heavily damaged and "ready to collapse" when he passed by shortly after the quake.

"I took a quick picture but it was bound to crumble," said Ribo, who added he immediately fled the area, driving through paved roads that were cracked by the quake. He said the tremor struck while he was meeting local officials outside a power plant on the outskirts of Kananga. "It normally emits white smoke but after the quake, it emitted dark smoke," Ribo added.

Teachers herded panicked grade school students out of the classrooms at the Rizal National High School near the power plant, he said. "Many children were hysterical. They were frantic, crying," he added.

Father Romy Salazar, the Catholic parish priest of the Leyte town of Jaro that was at the quake's epicentre, told AFP power was cut off and residents rushed out of their homes as the town shook. "I was inside the church. I was forced to hold on to the main door," Salazar said, but added he had not seen any major damage in the town.

In February, a 6.5-magnitude quake killed eight people and left more than 250 injured outside the southern city of Surigao. The following month a 5.9-magnitude tremor killed one person there in March.

Before the Surigao quakes, the last fatal earthquake to hit the country was a 7.1-magnitude tremor that left more than 220 people dead and destroyed historic churches when it struck the central islands in October 2013.

The Philippines lies on the so-called Ring of Fire, a vast Pacific Ocean region where many quakes and volcanic eruptions occur.