One dead as east Ukraine reignites 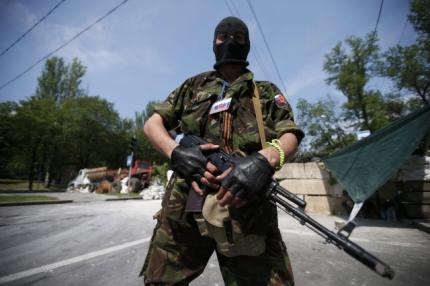 A member of a newly-formed pro-Russian armed group called the Russian Orthodox Army stands guard at a barricade near Donetsk airport. Pro-Russian separatists shot down a Ukrainian army helicopter on Thursday, killing 14 soldiers.

UKRAINE - A Ukrainian army volunteer was killed and three soldiers were wounded in fighting in the country&39;s east, Kiev said Tuesday, while pro-Russian rebels said one of their fighters was injured.

A volunteer died from his wounds on Monday after being hit by 120mm mortars fired by rebels at Ukrainian fighters who are stationed near the ruined airport of rebel hub Donetsk, the chief of staff of the Ukrainian armed forces said.

A volunteer battalion that formally joined the Ukrainian armed forces in March claimed the man killed was one of their fighters.

However, the Ukrainian army said he was a volunteer with the army, but denied he had a combat role.

"Yesterday the situation stabilised somewhat... The enemy reduced the number of its provocations," he said, while adding that the hostilities were continuing in breach of the terms a peace deal reached in Minsk in February.

"The village of Shyrokine remains the main hot point in fighting between our forces and the rebels," Lysenko said, referring to a village on the outskirts of Mariuopol, the largest city in the conflict zone still in government hands.

"The fighting went on almost all day yesterday," he said.

The separatist leaders also said one of their fighters was wounded, their official agency reported.

The Ukrainian army has been fighting pro-Russian militants for more than a year in the country&39;s east in a conflict in which more than 6,100 have been killed.

In February, a peace deal reached in Minsk with mediation from France and Germany called for the withdrawal of heavy arms of more than 100mm calibre from the frontline.

In recent days, fighting has intensified, however.