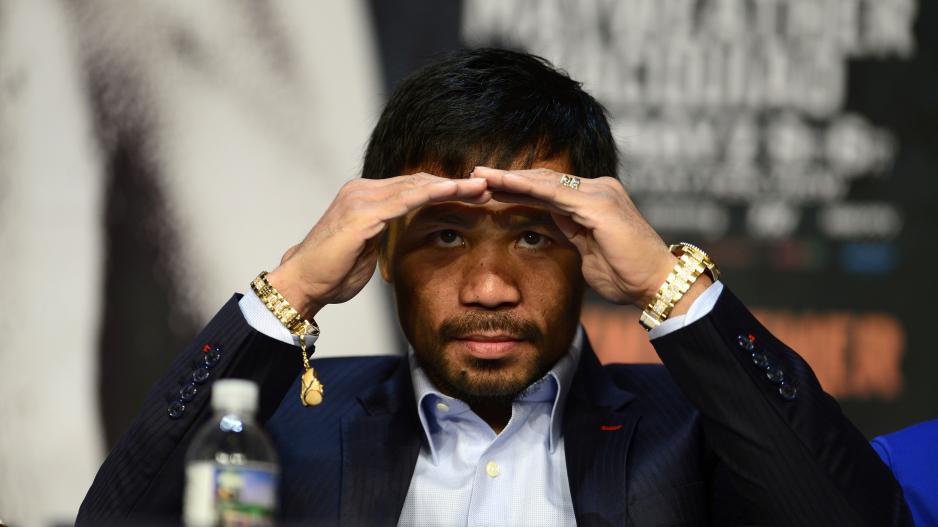 Filipino boxer Manny Pacquiao looks out at the audience during a press conference at MGM Grand Casino in Las Vegas, Nevada, USA, 29 April 2015.

MANILA – Eight-time world boxing champion Manny Pacquiao has sparked a firestorm of criticism in the Philippines after describing gay couples as "worse than animals".

Nearing the end of a glorious decades-long boxing career, the 37-year-old is reinventing himself as a conservative Bible-bearing politician ahead of the country&39;s May elections, when he is running for a senate seat.

"It&39;s common sense. Do you see animals mating with the same sex? Animals are better because they can distinguish male from female," Pacquiao told local broadcaster TV5 in an interview aired earlier this week.

Gay marriage is outlawed in the Philippines due to strong opposition from the Catholic Church and 80 percent of the country&39;s 100-million people subscribe to the faith.

Gay marriages are officiated at small churches but these unions are not recognised by the church or the state.

I don&39;t know, Mr. Pacquiao. Which is more animalistic? Gays kissing or being paid to beat up a human being like you were in a sabungan?

The country&39;s most popular gay comedian, Vice Ganda, posted PrayForMannyPacquiao to his 6,7-million followers on Twitter as he tore at the boxer.

"Some people think they can judge people like God just because they&39;ve attended a prayer meeting and read the bible," he said.

Singer Aiza Seguerra, who recently married her actress-girlfriend, called on voters to boycott Pacquiao, who is also preparing for his last boxing fight in April, calling him an "ignorant, bigoted hypocrite".

"You might have done our country proud but with your statement, you just showed the whole country why we shouldn&39;t vote for you," Seguerra said in a post on Instagram.

Pacquiao gave the television interview as part of his campaign for one of 12 seats in the nationally-elected senate.

The most recent surveys suggest he would win.

He currently represents his wife&39;s impoverished home province of Sarangani in the House of Representatives and is notorious for his chronic absences, favouring boxing training over legislation.

In one of the rare times he spoke at the legislature, Pacquiao quoted heavily from the Bible as he vigorously sought to stop a proposed law, since passed, granting free condoms to the poor.

He credits his renewed Christian faith for transforming him from a free-spending womaniser and gambler into a devoted family man who can recite Bible verses.

"Outside the boxing ring, I don&39;t think Manny Pacquiao should be taken seriously. It struck me first as funny. I pity him," Kakay Pamaran, a pastor at one of Manila gay churches, told AFP.

"I would advise him to talk to more LGBT (lesbian, gay, bisexual and transgender) persons, meet them and not just reduce his concept of LGBT to the sexual act."

You are called the "people&39;s champion" but i guess you are not everyones champion at all, Manny pacquiao.

Hey, Manny Pacquiao. When did love become more inhuman than the lack of compassion?

Sincerely, as a Filipino sportsfan who has loved you all these years, you broke my heart today Manny Pacquiao. Can&39;t believe you said that.