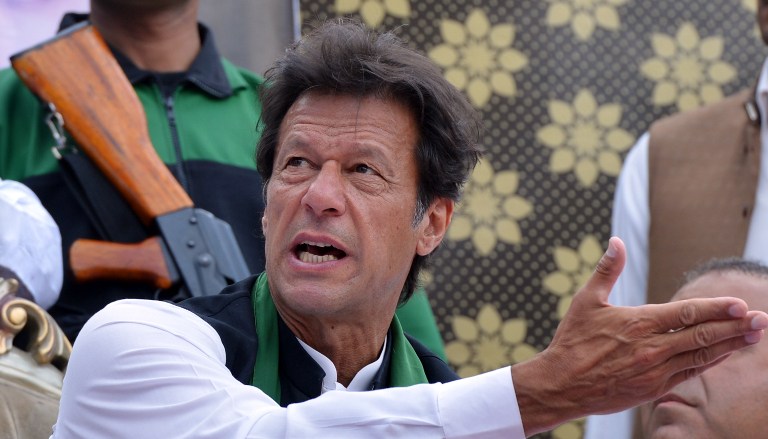 Imran Khan, chairman of Pakistan Tehreek-e-Insaaf (PTI) or Movement for Justice party, gestures as he attends a general election campaign meeting in Murree, around 60 kms from Islamabad on April 29, 2013.

KARACHI - Gunmen have killed a Pakistani politician from Imran Khan&39;s party in the southern port city of Karachi on the eve of a partial re-run of May 11 polls that were marked by more than 150 killings.

Zohra Hussain, 59, vice president of the women&39;s wing of Pakistan Tehreek-e-Insaf (PTI) in the province of Sindh, was targeted by three gunmen on a motorcycle outside her home in an upmarket part of the city late Saturday.

Former cricket star Khan was quick to pin the blame on the Muttahida Qaumi Movement (MQM) party, which represents the Urdu-speaking majority, and specifically its boss, Altaf Hussain, who lives in exile in London.

"I hold Altaf Hussain directly responsible for the murder as he had openly threatened PTI workers and leaders through public broadcasts," Khan said on his Twitter feed, describing the killing as "a targeted act of terror".

"I also hold the British Govt responsible as I had warned them abt Br citizen Altaf Hussain after his open threats to kill PTI workers," he said, adding that he was "shocked and deeply saddened by the brutal killing".

Firdous Shamim, a local PTI leader, told a news agency that Hussain "was leaving her home for some work when three gunmen attacked her. She thought they wanted to snatch her purse and handed it over to them but they killed her".

Police said all three gunmen escaped after the attack.

"They shot her with one bullet near her chin and she could not survive," senior police official Nasir Aftab told the news agency

The motive behind the shooting was unclear and there was no immediate claim of responsibility for the attack.

The killing came hours before voting was due to start at 43 polling stations in Karachi in a partial re-run ordered due to allegations of rigging in last weekend&39;s polls, which marked Pakistan&39;s first democratic transition of power.

Tensions have been running high between PTI and the MQM, Karachi&39;s dominant party, after Khan&39;s party accused its rival of widespread vote rigging. MQM has denied the charge and announced a boycott of the re-run.

PTI and the right-wing Jamaat-e-Islami party have staged nationwide protests against the alleged irregularities.

Pakistan&39;s election commission ordered the partial re-run due to allegations of ballot stuffing in a constituency known as NA-250 -- largely an affluent neighbourhood of the financial capital.

Voting in seven constituencies in Karachi last weekend was extended by three hours after complaints that polling stations opened late in the city, which last year saw record violence linked to ethnic and political tensions.

The election saw some 50 million Pakistanis vote, with centre-right former prime minister Nawaz Sharif emerging the winner nearly 14 years after he was deposed in a coup.

The Taliban, who denounce democracy as un-Islamic, killed more than 150 people during the election campaign, including 24 on polling day.