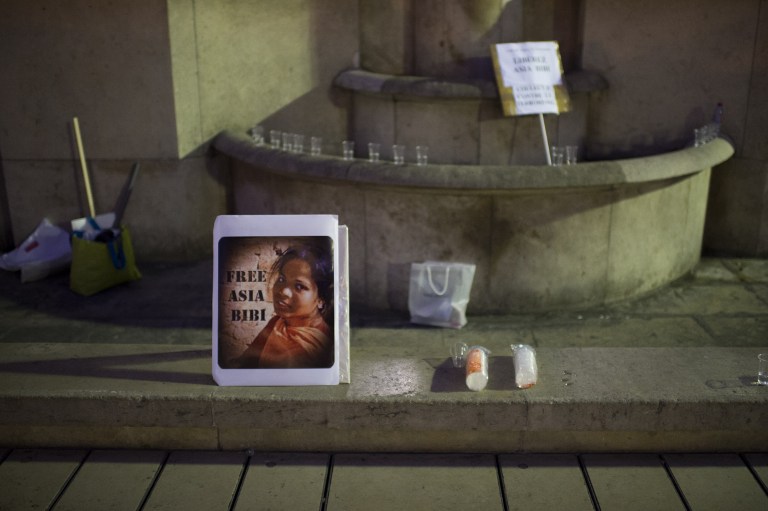 A sign reading "Free Asia Bibi" is placed on display as people demonstrate on the Parvis des droits de l'homme in Paris on October 29, 2014, to protest against the death sentence handed down to Pakistani Asia Bibi.

LAHORE - A Pakistani Christian woman sentenced to death for blasphemy filed an appeal in the country&39;s top court Monday, her final legal recourse after being found guilty of insulting the Prophet Mohammed four years ago.

A high court in the eastern city of Lahore confirmed the death sentence of Asia Bibi last month, dashing hopes the conviction might be overturned or commuted to a jail term.

She has been on death row since November 2010 after being convicted of insulting the prophet of Islam during an argument with a Muslim woman over a bowl of water.

"On behalf of Asia Bibi I have today filed an appeal in the Supreme Court," defence attorney Saiful Malook told AFP.

Malook said that in the petition his client has asked the court to reconsider deficiencies in the case including allegedly manipulated evidence and a delay between the time of the incident and its investigation by police.

Malook added that the blasphemy allegation was concocted by Bibi&39;s enemies to target her and had no basis in fact.

"We expect an early hearing of the appeal and hope that the proceedings will be over in one year," he added.

The allegations against Bibi date back to June 2009, when she was labouring in a field and a row broke out with some Muslim women she was working with.

She was asked to fetch water, but the Muslim women objected, saying that as a non-Muslim she was unfit to touch the water bowl.

A few days later the women went to a local cleric and put forward the blasphemy allegations.

Bibi&39;s husband has also written to Pakistan&39;s President Mamnoon Hussain to ask for her to be pardoned and allowed to move to France.

"We are convinced that Asia will only be saved from being hanged if the venerable President (Mamnoon) Hussain grants her a pardon. No one should be killed for drinking a glass of water," husband Ashiq Masih wrote in an open letter dated November 17 and published by the New York Times.

Paris mayor Anne Hidalgo has said the couple are welcome in the city.

Blasphemy is a hugely sensitive issue in the majority Muslim country, with even unproven allegations often prompting mob violence.

Pakistan has never executed anyone for blasphemy and has had a de-facto moratorium on civilian executions since 2008.

But anyone convicted, or even just accused, of insulting Islam, risks a violent and bloody death at the hands of vigilantes.