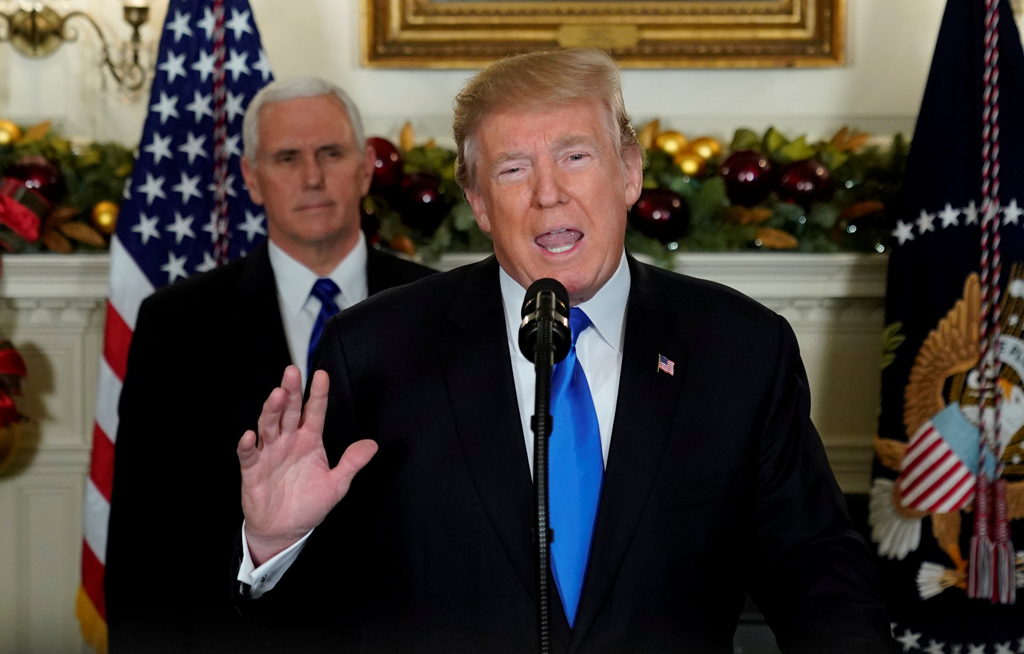 RAMALLAH - Palestinian president Mahmud Abbas&39;s Fatah faction on Saturday called for a massive demonstration next week to protest against a visit to Jerusalem by US Vice President Mike Pence after Washington said it would recognise the holy city as Israel&39;s capital.

Breaking with decades of US policy, President Donald Trump also said on December 6 that he would move the US embassy from Tel Aviv to Jerusalem.

In New York, Egypt on Saturday circulated a draft resolution that would affirm that any change to the status of Jerusalem has no legal effect and must be rescinded.

Diplomats said the council could vote on the proposal as early as Monday, with the United States expected to use its veto power to block it but with most, if not all, of the 14 other council members backing the measure.

Trump&39;s declaration has stirred global condemnation and sparked angry protests across Arab and Muslim countries, as well as deadly clashes in the occupied territories between Palestinians and Israeli forces.

It also prompted Abbas to cancel a meeting with Pence, who arrives Wednesday in Jerusalem, and warn that Washington no longer had a role to play in the Palestinian-Israeli peace process.

"We call for angry protests at the entrances to Jerusalem and in its Old City to coincide with the visit on Wednesday of US Vice President Mike Pence and to protest against Trump&39;s decision," Fatah said in a statement.

The status of Jerusalem is one of the most controversial issues in the Israeli-Palestinian conflict.

Israel seized control of the eastern part of the city in the 1967 Middle East war and sees the whole of Jerusalem as its undivided capital. The Palestinians view the east as the capital of their future state.

The call to protest came as thousands of Palestinians took part in funerals for four men killed Friday in clashes with Israeli forces during protests in the West Bank and in the Gaza Strip.

Mourners chanted anti-Trump slogans and masked men fired into the air during one of the ceremonies in the village of Beit Ula in the occupied West Bank.

Funerals were also held for the two other Palestinians killed by Israeli forces in Gaza, where the enclave&39;s Islamist Hamas rulers had on Friday called for a "day of rage".

One of those killed was Ibrahim Abu Thurayeh, a Palestinian who lost his legs in an Israeli attack a decade ago. With his wheelchair, he was a regular feature at protests along Gaza&39;s border with Israel.

Friday&39;s deaths brought to eight the number of Palestinians killed in violence or air strikes since Trump&39;s Jerusalem move, and hundreds have been wounded.

Pence will no longer see Palestinian officials during his visit to the region after they -- as well as Egyptian Muslim and Christian religious leaders -- cancelled meetings in protest at the embassy move.

"We understand that the Palestinians may need a bit of a cooling off period, that&39;s fine," a senior White House official said Friday. "We will be ready when the Palestinians are ready to re-engage."

Pence is expected to try to push the Israeli-Palestinian peace process forward after he lands in Jerusalem on Wednesday, US administration officials have said.

They also suggested that the Western Wall -- in largely Palestinian east Jerusalem -- would almost certainly be part of Israel under any deal, sparking Palestinian condemnation.

"We will not accept any changes to the 1967 border of east Jerusalem," Nabil Abu Rudeina, a spokesman for the Palestinian president, said Saturday.

"This American position proves once again that the current US administration is completely out of the peace process," he said.

A US administration official said Friday: "We cannot envision any situation under which the Western Wall would not be part of Israel."

Another added: "We cannot imagine Israel would sign a peace agreement that didn&39;t include the Western Wall."

The Western Wall is the holiest site where Jews are permitted to pray, at the foot of the Haram al-Sharif compound housing the Al-Aqsa mosque and the golden-topped Dome of the Rock, the third holiest site in Islam.