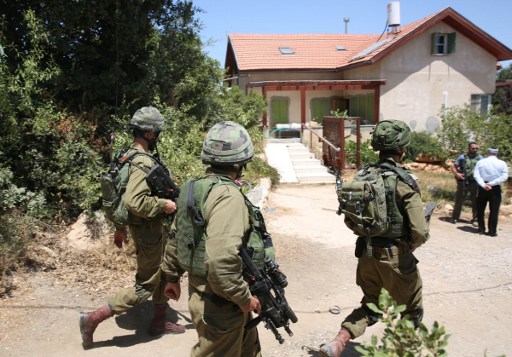 sraeli soldiers walk outside a house in the Jewish settlement of Kiryat Arba in the occupied West Bank where a 13-year-old Israeli girl was fatally stabbed in her bedroom on June 30, 2016.

JERUSALEM - A Palestinian attacker fatally stabbed a 13-year-old girl in her home in a Jewish settlement in the West Bank on Thursday before being shot dead by security guards, the Israeli army said.

The army said the Palestinian killed the girl in her bed after breaking into her home in the Kiryat Arba settlement outside the city of Hebron.

Security personnel rushed to the house and fired on the attacker, who wounded a guard before being shot dead, the army said.

The girl was taken to hospital in Jerusalem in critical condition and died of her wounds.

The Palestinian health ministry identified the attacker as Mohammed Nasser Tarayra, 19, from the village of Bani Naim, just outside the city.

Israeli media, which identified the girl as Hallel Yaffa Ariel, reported that she was attacked in her sleep. The Israeli military released a photograph of her blood-spattered bedroom.

This is the bedroom of a 13 year old girl who was murdered today in a terror attack in Kiryat Arba. pic.twitter.com/CocaclUNB3

Israeli Prime Minister Benjamin Netanyahu held talks with Defence Minister Avigdor Lieberman after the attack and the home village of the assailant was sealed off.

Israeli work permits for members of Tarayra&39;s extended family were also to be revoked and authorities began procedures aimed at demolishing his home, a measure often taken against attackers.

"The horrifying murder of a young girl in her bed underscores the bloodlust and inhumanity of the incitement-driven terrorists that we are facing," Netanyahu said in a statement.

"The entire nation deeply identifies with the family&39;s pain and declares to the murderers: &39;You will not break us&39;."

Hebron in the occupied West Bank has been a flashpoint in a spate of deadly unrest that has rocked Israel and the Palestinian territories since October last year.

Several hundred Jewish settlers live in a tightly guarded enclave in the heart of the city of more than 200,000 Palestinians, a persistent source of tensions.

Kiryat Arba, where Thursday&39;s attack occurred, is on the outskirts of the city and has a population of more than 7,000.

The violence since October has killed at least 211 Palestinians, 33 Israelis, two Americans, an Eritrean and a Sudanese.

Most of the Palestinians were carrying out knife, gun or car-ramming attacks, according to Israeli authorities.

Others were killed in clashes with security forces or by Israeli air strikes on the Gaza Strip.

The number of attacks has declined but the deadliest yet hit Tel Aviv earlier this month when Palestinian gunmen killed four people at a popular nightspot. The two attackers - cousins from the Hebron area - were arrested.

Analysts say Palestinian frustration with Israeli occupation and settlement-building in the West Bank, the complete lack of progress in peace efforts and their own fractured leadership have fed the unrest.

Israel says incitement by Palestinian leaders and media is a leading cause of the violence.

On a visit to Israel and the Palestinian territories this week, UN chief Ban Ki-moon condemned the recent wave of attacks as "terrorism".

But he urged Israel to address the "key underlying causes of violence" including "growing Palestinian anger, the paralysis of the peace process, the nearly a half-century of occupation."

Negotiations between the Israelis and Palestinians have been at a standstill since a US-led initiative collapsed in April 2014.

France is planning to hold an international conference before the end of the year in a bid to restart the peace process.

Israel opposes the French initiative, calling instead for bilateral negotiations, while Palestinian leaders have expressed support for it.