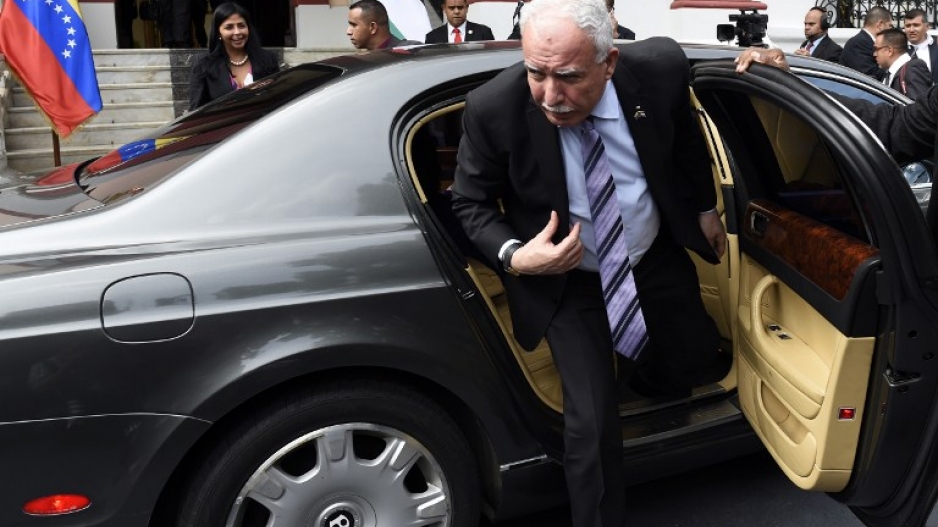 Palestinian foreign Minister Riad al-Malki arrives at the Miraflores presidential palace in Caracas on May 20, 2015.

THE HAGUE - The Palestinian Authority on Thursday presented a first batch of evidence to the International Criminal Court in support of its campaign to have Israel investigated for alleged war crimes.

"The state of Palestine has pledged to cooperate with the court including by providing it with relevant information and it is fulfilling its pledge today," Palestinian Foreign Minister Riad al-Malki told journalists after leaving the court.

"The information provided by the state of Palestine make a compelling case for the prompt opening of an investigation," Malki added.

ICC chief prosecutor Fatou Bensouda in January launched a preliminary probe to see whether there was enough evidence for a full-blown war crimes investigation into last year&39;s conflict in the Gaza Strip between Israel and the Palestinian Islamist movement Hamas.

The documents handed over on Thursday consist of two files: one about alleged Israeli crimes committed in Gaza during the 50-day war in July and August last year that killed 2,200 Palestinians, mostly civilians, and 73 Israelis, mostly soldiers.

The other file deals with Israel&39;s occupation of the West Bank and East Jerusalem, including "information about the issue of Palestinian prisoners," the Palestinian mission in The Hague said.

"Achieving justice is essential for the Palestinian victims, dead and alive," said Malki. "Palestine has chosen to seek justice not vengeance, this is why we are here today."

The move is part of an increased focus on diplomatic manoeuvring by the Palestinians, who have been frustrated with the lack of progress in ending the Israeli occupation and creating their own independent state.

Bensouda warned in May that both sides could face war crimes charges in the case, which has been vehemently opposed by Israel. Israel is not a signatory of the statute that established the court. Palestine ratified the ICC&39;s statutes in January.

The PA&39;s submission of evidence comes three days after the release of a UN report that said both Israel and Palestinian militants may have committed war crimes during the 2014 Gaza conflict.

Earlier this year, as the Palestinians were putting their accession to the ICC in motion, president Mahmud Abbas sent documents to the court authorising the prosecutor to investigate alleged crimes in the  Palestinian territories since June 13, 2014.

Among the more controversial events of the Gaza war was Israel&39;s bombing of UN schools being used as shelters for the displaced.

Israel said it was forced to carry out the strikes, claiming Hamas used them to store weapons or fire rockets at Israel.

The ICC, set up in 2002, is the world&39;s only permanent independent body to try the most serious crimes of concern to the international community.