Palestinians to snub Pence during visit over Jerusalem move 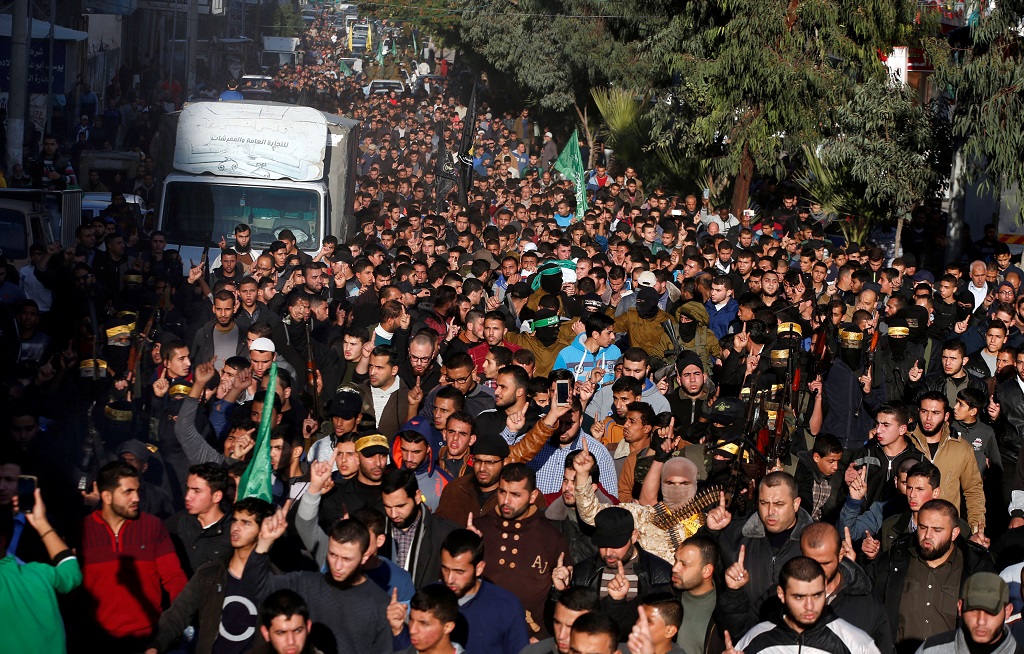 Mourners and Palestinian Hamas militants take part in the funeral of their comrade, who was killed in an Israeli airstrike, in Gaza City December 9, 2017.

CAIRO – Palestinian President Mahmoud Abbas will not meet U.S. Vice President Mike Pence during Pence&39;s visit to the region this month, in a snub over the U.S. recognition of Jerusalem as Israel&39;s capital, the Palestinian Foreign Minister said on Saturday.

Violence erupted for a third day in Gaza in response to President Donald Trump&39;s announcement on Wednesday, which overturned decades of U.S. policy towards the Middle East.

Israeli air strikes killed two Palestinian gunmen on Saturday after militants fired rockets from the enclave into Israel on Friday, which had been declared a "day of rage" by Palestinian factions.

Trump&39;s recognition of Jerusalem has infuriated the Arab world and upset Western allies, who say it is a blow to peace efforts and risks sparking more violence in the region.

Israel says all of Jerusalem is its capital. Palestinians want East Jerusalem as the capital of a future independent state.

Most countries consider East Jerusalem, which Israel annexed after capturing it in a 1967 war, to be occupied territory, and say the status of the city should be left to be decided at future Israeli-Palestinian talks.

The Trump administration says it is still committed to Palestinian-Israeli talks, that Israel&39;s capital would be in Jerusalem under any serious peace plan, and that it has not taken a position on the city&39;s borders. It says the moribund negotiations can be revived only by ditching outdated policies.

Palestinian Foreign Minister Riyad al-Maliki said the Palestinians will be looking for a new peace talks broker instead of the United States and would seek a UN Security Council resolution over Trump&39;s decision.

From Somalia to Indonesia, people around the world protest in solidarity with Palestinians. pic.twitter.com/eqkKBP4lG6

"We will seek a new mediator from our Arab brothers and the international community," Maliki told reporters in Cairo before an Arab League meeting to discuss Trump&39;s Jerusalem decision.

A Turkish presidential source said Turkey&39;s President Tayyip Erdogan and French President Emmanuel Macron will work together to try to persuade the United States to reconsider the move.

A possible meeting with Pence has also been turned down by Egypt&39;s Coptic Church, MENA state news agency reported.

Trump&39;s adviser and son-in-law, Jared Kushner, is leading efforts to restart negotiations, though his bid has shown little public progress so far.

Palestinian militants launched at least three rockets towards Israeli towns from Gaza after dark on Friday and Israel said it responded with air strikes that targeted a weapons depot, a military compound and two weapons manufacturing facilities.

Hamas, which controls Gaza, confirmed the two men killed in the pre-dawn strikes belonged to the group, which has urged Palestinians to keep up the confrontation with Israeli forces.

However, Palestinian protests on Saturday were less intense than on the previous two days. About 60 Palestinian youths threw stones at Israeli soldiers across the Gaza-Israel border and the health ministry said at least 10 were wounded by Israeli fire.

In the occupied West Bank, Palestinians set fire to tyres and threw stones and fire-bombs at Israeli troops, who responded with tear gas, water cannons, rubber bullets and, in a few instances, live fire. The Israeli military said one protester was arrested.

In East Jerusalem about 60 people demonstrated near the walled Old City, where paramilitary border police and officers on horseback tried to disperse the crowd with tear gas. Thirteen demonstrators were arrested and four officers were lightly injured by stones, police spokesman Micky Rosenfeld said.

Hundreds of Palestinians were injured Saturday in fierce clashes with Israeli forces in the West Bank, East Jerusalem and the Gaza Strip during protests against the U.S. decision to recognize Jerusalem as Israel&39;s capital https://t.co/T5xV26Gl4x pic.twitter.com/Le2sC0XvJq

On Friday, thousands of Palestinians took to the streets in protest and two Palestinians were killed in clashes with Israeli troops on the Gaza border. Scores more were wounded there and in the West Bank. Across the Arab and Muslim worlds, thousands more protesters had gathered to express solidarity.

The Turkish presidential source said Erdogan and Macron agreed during a phone call that Trump&39;s move was worrying for the region and that Turkey and France would make a joint effort to try to reverse the U.S. decision.

Erdogan also spoke to the presidents of Kazakhstan, Lebanon and Azerbaijan on Saturday, the source said. On Wednesday, he called an urgent meeting of the Organization of Islamic Cooperation in Turkey next week.

A senior United Arab Emirates (UAE) official said on Saturday that Trump&39;s move was a "gift to radicalism".

"Radicals and extremists will use that to fan the language of hate," Minister of State for Foreign Affairs Anwar Gargash said at the Manama Dialogue security conference in Bahrain.