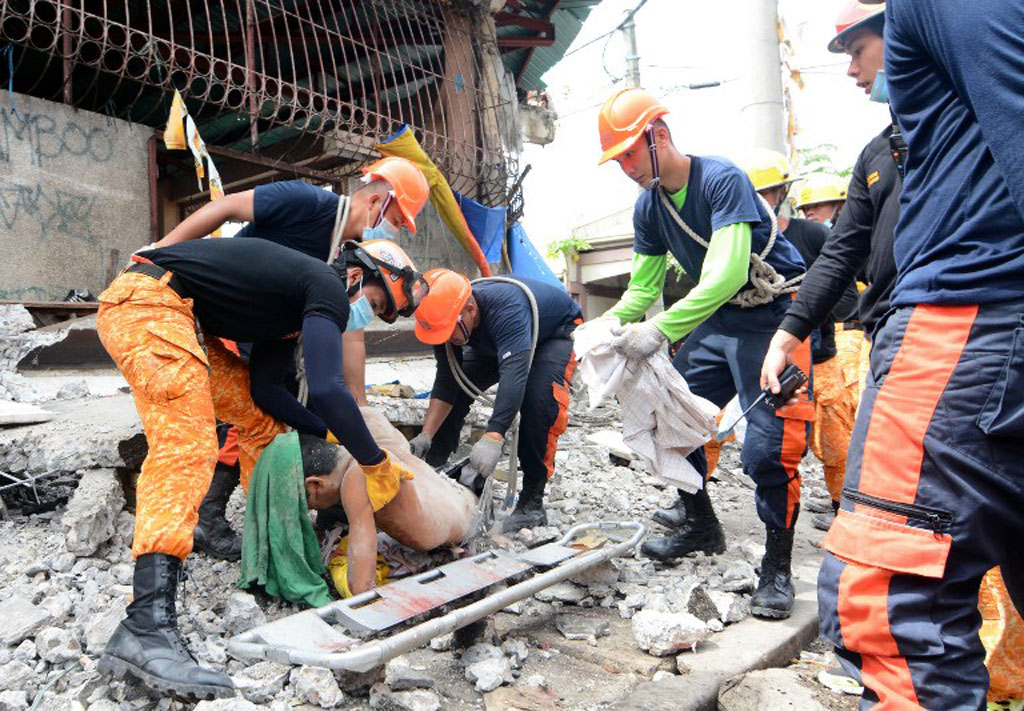 Rescuers pick up the body of a dead man near the port in Cebu City, Philippines after a 7.1 magnitude earthquake struck the region on October 15, 2013.

CEBU, Philippines - A powerful earthquake killed at least 93 people in the Philippines on Tuesday as it generated landslides that buried homes, triggered terrified stampedes and destroyed historic churches.

Fifteen of the confirmed fatalities were in Cebu, the country&39;s second most important city and a gateway to some of its most beautiful beaches, the national disaster agency reported.

The 7.1-magnitude quake killed another 77 people in the neighbouring island of Bohol, famed for its rolling "Chocolate Hills", while one other person died on nearby Siquijor, which attracts tourists with its pristine white sands.

"I was thrown to the ground by the strength of the quake. Broken glass rained on me," Elmo Alinsunorin, who was on duty as a guard for a government tax office in Cebu, told AFP. "I thought I was going to die."

Authorities said the death toll could still climb, with officials struggling to assess the extent of the damage in the worst-hit areas of Bohol where roads remained impassable and power was cut at nightfall.

Bohol police chief Senior Superintendent Dennis Agustin said one of the worst affected areas was the coastal town of Loon, where at least 18 people were killed by landslides that buried houses along large stretches of highway.

Loon is about 20 kilometres from where the epicentre of the quake struck at just after 8:00am. It faces a narrow strait of water, with Cebu about 25 kilometres away on the other side.

Cebu, with a population of 2.5 million people, is the political, economic, educational and cultural centre of the central Philippines.

It hosts the country&39;s busiest port and the largest airport outside of the capital of Manila, which is about 600 kilometres to the north.

A university, a school, shopping malls, public markets and many small buildings in Cebu sustained damage in the quake.

Three of the people who died in Cebu were crushed to death in a stampede at a sports complex, according to the provincial disaster council chief, Neil Sanchez.

"There was panic when the quake happened and there was a rush toward the exit," Sanchez told AFP.

He said two other people were killed when part of a school collapsed on a car they had parked in, while four others died at a fish market that crumbled.

Ten churches, some of which have crucial links to the earliest moments of Spanish colonial and Catholic conquest in the 1500s, were also badly damaged on Cebu and Bohol.

Other limestone churches that were built in the 1700s and 1800s on Bohol had crumbled completely, prompting grieving for the loss of some of the Philippines&39; most important cultural treasures.

"It is like part of the body of our country has been destroyed," Michael Charleston "Xiao" Chua, a history lecturer at De La Salle University in Manila, told AFP.

Aside from its beaches, Bohol is famous for its more than 1,000 small limestone "Chocolate Hills" that turn brown during the dry season.

One of the main tourist venues there, the Chocolate Hills Complex, was severely damaged, according to Delapan Ingleterra, head of a local tourist police unit.

"There are huge cracks in the hotel and there was a collapse of the view deck on the second floor," Ingleterra told AFP, adding that no-one was injured at the complex.

There were no reports of foreign tourists being killed anywhere in the disaster zone.

Tuesday&39;s quake was followed by hundreds of aftershocks, at least four aftershocks of which measured more than 5.0 in magnitude.

The Philippines lies on the so-called Ring of Fire, a vast Pacific Ocean region where many of Earth&39;s earthquakes and volcanic eruptions occur.

More than 100 people were left dead or missing in February last year after an earthquake struck on Negros island, about 100 kilometres from the epicentre of Tuesday&39;s quake.

The deadliest recorded natural disaster in the Philippines occurred in 1976, when a tsunami triggered by a magnitude 7.9 earthquake devastated the Moro Gulf on the southern island of Mindanao.

Between 5,000 and 8,000 people were killed, according to official estimates.