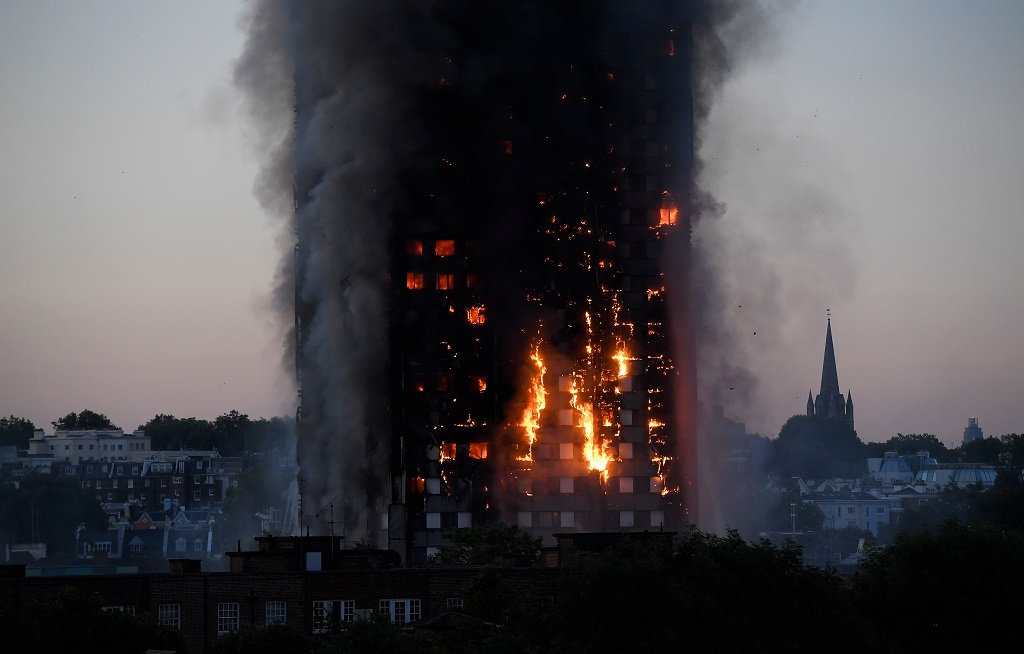 LONDON – A blaze engulfed a 24-storey housing block in central London on Wednesday, trapping residents as they slept and killing at least 12 people in an inferno that the fire brigade said was unprecedented in its scale and speed. UK Prime Minister Theresa May says there will be an investigation into cause of london tower block fire to see if lessons can be learned.

The death toll from this horrifying fire at a 24-story apartment complex in London is now 12 – and counting https://t.co/ONieOkFvuS pic.twitter.com/bw5RD6pCiN

More than 200 firefighters, backed up by 40 fire engines, fought for hours to try to control the blaze, London's deadliest in a generation. The Grenfell Tower apartment block was home to about 600 people.

A woman stands on a balcony behind a sign near a tower block severely damaged by a seriousfire, in north Kensington, West London, Britain June 14, 2017. (REUTERS / Hannah McKay)

London Mayor Sadiq Khan said the fire raised questions about the safety of such high-rise blocks, and the BBC reported that the scale of the disaster could delay Prime Minister Theresa May's announcement of a parliamentary deal to stay in power.

Some residents screamed for help from behind upper-floor windows, others tried to throw children to safety, as flames raced through the block of about 120 apartments in the North Kensington district just before 1 a.m.

A bag on a stretcher is wheeled away from a tower block that was severely damaged by a serious fire, in north Kensington, West London, Britain June 14, 2017. (Neil Hall / REUTERS)

Firefighters said they had rescued 65 people - some in pyjamas - from the 43-year-old block, a low-rent housing estate overlooking upscale parts of the Kensington area.

"We could see a lot of children and parents screaming for 'Help! Help! Help!' and putting their hands on the window and asking to help them," Amina Sharif told Reuters.

"We could do nothing and we could see the stuff on the side was falling off, collapsing. We were just standing screaming and they were screaming."

Another witness, Saimar Lleshi, saw people tying together sheets to try to escape.

"I saw three people putting sheets together to climb down, but no one climbed down. I don’t know what happened to them. Even when the lights went off, people were waving with white shirts to be seen," Lleshi said.

The fire sent up plumes of smoke that could be seen from miles away. The ambulance service said 68 people were being treated in hospital, with 18 in critical condition.

More than 16 hours after the fire started, crews were still trying to douse flames as they sought to reach the top floors.

But London police commander Stuart Cundy told reporters he did not believe further survivors would be found in the building.

A police officer helps to evacuate a local resident from close to the scene of a serious fire in a tower block at Latimer Road in West London, Britain June 14, 2017. (Neil Hall / REUTERS)

At a nearby community centre used to house some of those rescued, tensions were rising as occupants waited for news.

"The fire, which was unprecedented in its scale and speed, will be subject to a full fire investigation," said Steve Apter from the London Fire Brigade. "Any lessons learnt from this will be borne out not just across London, across the UK - and lessons learnt globally."

The emergency services said it was too early to say what had caused the inferno, which left the block a charred, smoking shell. Some residents said no alarm had sounded. Others said they had warned repeatedly about fire safety in the block.

Residents who escaped told how they woke up to the smell of burning and rushed to leave through smoke-filled corridors and stairwells.

A woman stands on a balcony behind a sign near a tower block severely damaged by a seriousfire, in north Kensington, West London, Britain June 14, 2017. (Neil Hall / REUTERS)

There were reports that some leapt out of windows. Other witnesses spoke of children including a baby being thrown to safety from high windows.

Prime Minister May said her thoughts were with all those affected. Opposition leader Jeremy Corbyn said sprinkler systems should be installed in such blocks and called on the government to make a statement in parliament.

Khan, the London mayor, said questions needed to be answered about the safety of tower blocks after some residents said they had been advised they should stay in their flats in the event of a fire.

Residents of #GrenfellTower in London raised concerns about the building's safety months before the fire https://t.co/2NhQR7TXsk pic.twitter.com/Z3uTBaIvyJ

"What we can't have is a situation where people's safety is put at risk because of bad advice being given or, if it is the case, as has been alleged, of tower blocks not being properly serviced or maintained," Khan said.

Resident Michael Paramasivan told BBC radio he had spoken to a woman who lived on the 21st floor:

"She has got six kids. She left with all six of them. When she got downstairs, there was only four of them with her. She is now breaking her heart."