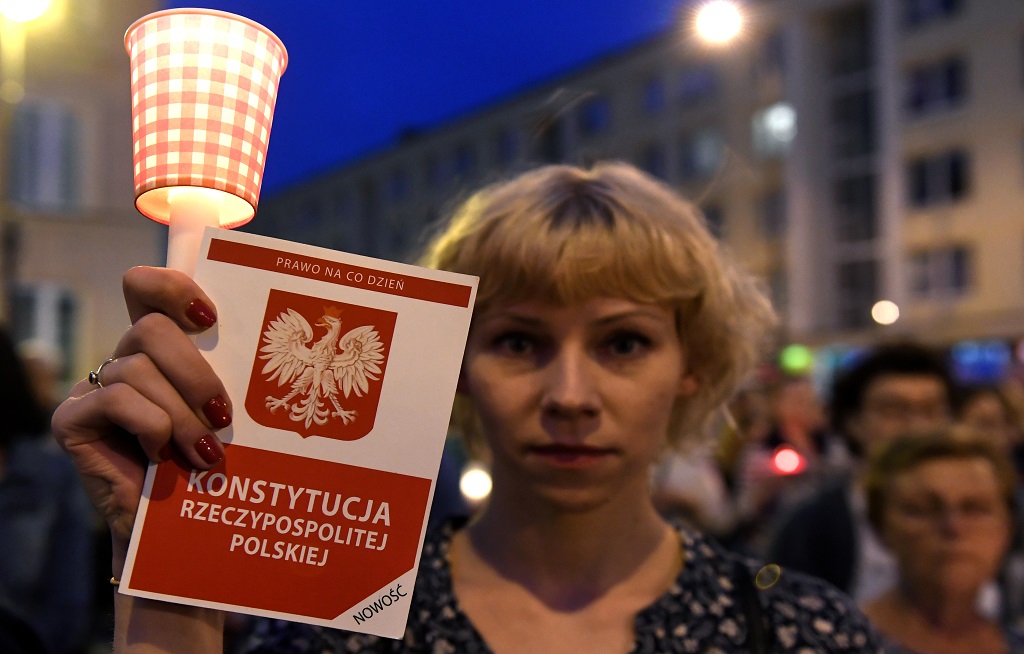 A woman holds a candle as protesters take part in a demonstration in front of the Polish Supreme Court on July 23, 2017, in Warsaw to protest against the new bill changing the judiciary system.

The reforms allow parliament to choose members of a body designed to protect judicial independence and reinforce political control over the Supreme Court.

Warsaw has already come under heavy fire from Brussels for a string of earlier judicial reforms that the bloc argues pose a "systemic threat" to the rule of law.

The EU has warned Poland it may trigger Article Seven of the EU&39;s treaties, the so-called "nuclear option" that freezes voting rights, over the previous reforms.

Poland&39;s right-wing Law and Justice (PiS) government, which began making changes to the judiciary after coming to power in late 2015, insists the new reforms are needed to combat corruption and overhaul the judicial system still haunted by the communist era.

The measures approved Friday, which are expected to win backing from the PiS-controlled Senate and President Andrzej Duda, are likely to inflame further tensions.

The law on the Supreme Court reduces the retirement age of its members to 65 from 70 as a way to "decommunise" it by removing judges who may have served in communist courts before the regime collapsed in 1989.

The president can however allow individual judges to continue working until 70 years of age.

Critics insist the measure is illegal as it requires the departure of the court&39;s existing chief justice, Malgorzata Gersdorf, who is only half way through the her constitutionally mandated six-year term.

Critics also allege that the PiS administration simply wants to purge a judiciary it believes is still stacked in favour of supporters of former liberal prime minister Donald Tusk, a political arch-rival who is now president of the European Council.

Reforms passed Friday to the National Council of the Judiciary (KRS), a body intended to guarantee judicial impartiality, mean that parliament will now choose its 15 judges. Previously, judges themselves chose the KRS members.

Council of Europe Commissioner for Human Rights, Nils Muiznieks, insisted Friday that the new reforms "will further undermine the independence of the judiciary by subordinating it to the executive and the legislature and will thereby further erode the separation of powers and the rule of law."

Duda proposed new versions of the reforms of the Supreme Court and the KRS after he vetoed changes backed by the PiS government in July.

He had argued that the legislation gave too large of a role to the attorney general, who in Poland is also the justice minister.

The initial reforms had sparked massive street protests, concern from the US State Department and threats of EU sanctions.