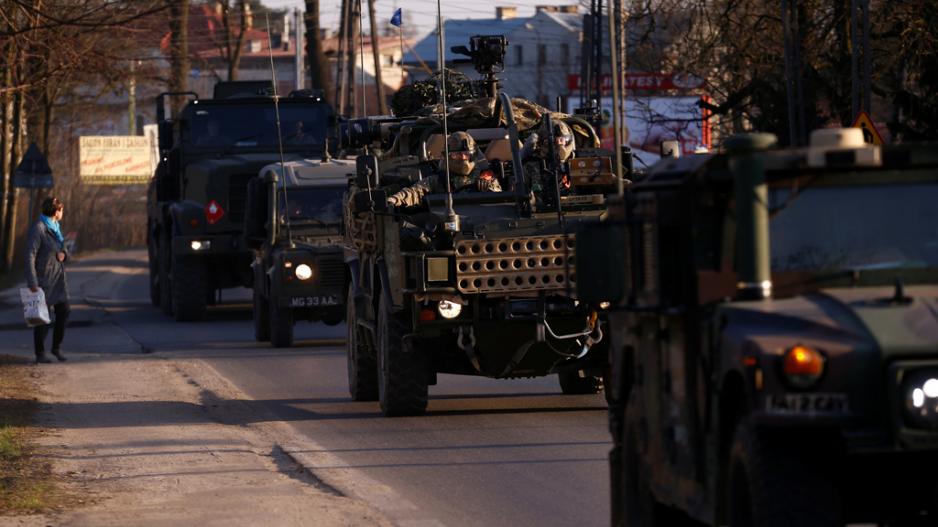 A convoy of troops, a part of NATO's reinforcement of its eastern flank, who are on their way from Germany to Orzysz in northeast Poland, drives through Sulejowek towards a military base in Wesola, near Warsaw, Poland, March 28, 2017.

STRASBOURG, France - Poland will withdraw its contingent from the Eurocorps military group by 2020, a spokesperson  for the Strasbourg-based intergovernmental body said Tuesday.

"The Polish soldiers will leave as their individual contracts end, within three years at the latest," Colonel Vicente Dalmau told AFP, adding the the Polish government had made the decision "several months ago".

NATO member Poland, which has associate nation status and 120 soldiers in Eurocorps, was due to become the sixth full member -- joining Belgium, France, Germany, Spain and Luxembourg -- at the beginning of this year.

But Dalmau said that is no longer the case: "The Polish government has decided to reverse the previous government's decision to become a full Eurocorps member, and to remain an associate nation."

Poland's defence ministry confirmed the information, while denying that Warsaw was withdrawing from the group completely.

"Poland has only abandoned its application for full Eurocorps member status and will also gradually decrease its contribution in the coming three, four years," the ministry said in a statement.

"It will continue however to maintain associate nation status."

The ministry said the decision is notably due "to an increased burden on the armed forces resulting from the implementation of decisions taken at the NATO summits in Newport and Warsaw, including the decision to strengthen NATO's eastern flank."

"Our reduced involvement in the Eurocorps will not have negative effects on Poland's role in Europe's common security and defence policy," the ministry added.

Eurocorps was set up at the initiative of France and Germany and became operational in 1995.

Of its 6,000 troops that can be put at the disposal of NATO or the European Union, around 1,000 are based in Strasbourg, with the other 5,000 in the Franco-German Brigade, stationed mainly in Germany.

According to experts, there could be consequences for Poland at the European level because of the Eurocorps decision taken by its conservative and eurosceptic Law and Justice (PiS) party.

"If Poland's soldiers leave within three years, then that means we will remain a Eurocorps member only on paper," said General Stanislaw Koziej, who was a security adviser to Poland's previous liberal president Bronislaw Komorowski.

"We're scaling back our commitment, which is bad," Koziej told AFP.

A European diplomat, who wished to remain anonymous, told AFP that "with these kinds of decisions, Poland risks being marginalised within the European Union."

"If true, this is bad news. A decision that is a blow to European cooperation in terms of defence and our ties to France and Germany," he told AFP.

The Eurocorps force, which also has contingents from Belgium, Spain and Luxembourg, can raise more than 60,000 soldiers, who normally remain based in their respective countries.

Associate members besides Poland include Greece, Turkey, Italy and Romania.

Eurocorps has served in Bosnia, Kosovo, Afghanistan and Mali.