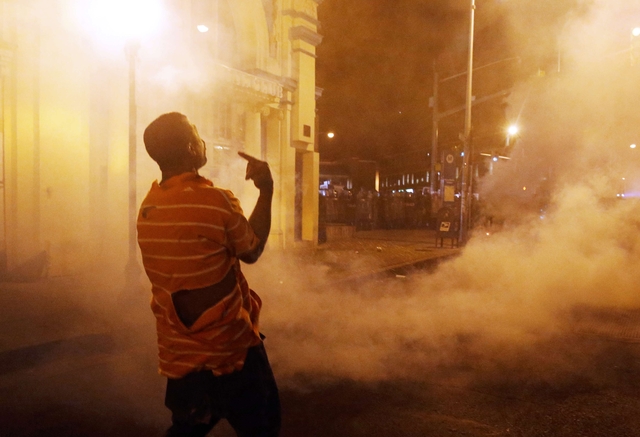 A protester reacts as clouds of smoke and crowd control agents rise shortly after the deadline for a city-wide curfew passed in Baltimore, Maryland April 28, 2015, as crowds protest the death of Freddie Gray, a 25-year-old black man who died in police cus

BALTIMORE - Police in riot gear used pepper spray and rubber bullets to disperse a group of protesters in Baltimore on Tuesday night after a curfew took effect a day after the worst rioting in the United States in years.

Most protesters were at an intersection in West Baltimore that was the scene of the heaviest looting and rioting on Monday over the death of a black man who was injured in police custody.

When protesters threw bottles and jeered in response, the police slowly advanced a few feet at a time, breaking up the crowd by firing rubber bullets and projectiles containing a chemical irritant.

Elsewhere in the city the curfew was mostly respected and police said the only exceptions would be for medical emergencies and for people going to and from jobs.

Just ahead of the curfew, Mayor Stephanie Rawlings-Blake went to the intersection where protesters had gathered and pleaded with them to go home.

On Monday, shops were looted, buildings burned to the ground, 20 officers were injured and police arrested more than 250 people in the violence following the funeral of Gray, who died on April 19 a week after sustaining injuries in police custody.

Earlier, as night fell, hundreds of protesters chanted "Black Lives Matter," and there were also scenes of reconciliation, cleanup and even celebration.

Near a looted and burned-out CVS pharmacy, hundreds of people waved flags and swayed in the street as they watched 50 dancers gyrating to the drumming of a unity band put together for the evening from music groups from all over the city.

"It feels good to see everyone coming together. People just enjoying themselves," said Roxanne Gaither, 45. "This is what Freddie Gray would have wanted to see. Last night was terrible if a curfew is what it takes to avoid that, so be it."

For nearly a week after Gray died from a spinal injury, protests in Baltimore had been peaceful and Mayor Rawlings-Blake said she acted cautiously on Monday to avoid a heavy-handed response that would incite more violence.

On Tuesday she responded to critics who said she waited too long to act.

"It&39;s a very delicate balancing act, when we have to make sure that we&39;re managing but not increasing and escalating the problem," said Rawlings-Blake, 45, an African-American and Democrat who grew up in the city 40 miles (64 km) from Washington, D.C.

Maryland Governor Larry Hogan, a Republican, said he had called Rawlings-Blake repeatedly Monday but that she held off requesting the National Guard until three hours after looting started in the largely black city of 620,000.

He ended up declaring a state of emergency while she imposed the curfew.