Pope slams capitalism as 'dung of the devil' 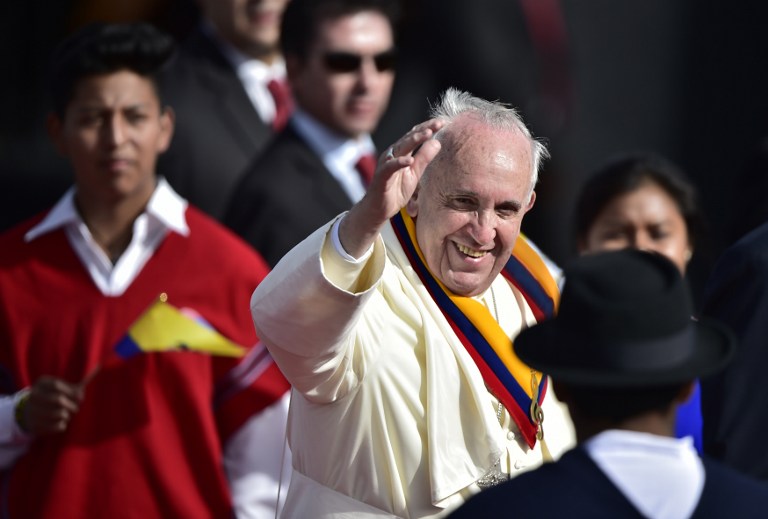 Pope Francis began his first South American trip in two years for an eight-day tour of Ecuador, Bolivia and Paraguay.

SANTA CRUZ, Bolivia - Pope Francis on Thursday urged the downtrodden to change the world economic order, denouncing a "new colonialism" by agencies that impose austerity programmes and calling for the poor to have the "sacred rights" of labour, lodging and land.

In one of the longest, most passionate and sweeping speeches of his pontificate, the Argentine-born pope also asked forgiveness for the sins committed by the Roman Catholic Church in its treatment of native Americans during what he called the "so-called conquest of America."

Quoting a fourth century bishop, he called the unfettered pursuit of money "the dung of the devil," and said poor countries should not be reduced to being providers of raw material and cheap labour for developed countries.

Repeating some of the themes of his landmark encyclical "Laudato Si" on the environment last month, Francis said time was running out to save the planet from perhaps irreversible harm to the ecosystem.

Francis made the address to participants of the second world meeting of popular movements, an international body that brings together organisations of people on the margins of society, including the poor, the unemployed and peasants who have lost their land. The Vatican hosted the first meeting last year.

He said he supported their efforts to obtain "so elementary and undeniably necessary a right as that of the three "L&39;s": land, lodging and labour."

His speech was preceded by lengthy remarks from leftist Bolivian President Evo Morales, who wore a jacket adorned with the face of Argentine revolutionary Ernesto "Che" Guevara. He was executed in Bolivia in 1967 by CIA-backed Bolivian troops.

"Let us not be afraid to say it: we want change, real change, structural change," the pope said, decrying a system that "has imposed the mentality of profit at any price, with no concern for social exclusion or the destruction of nature."

Since his election in 2013, the first pope from Latin America has often spoken out in defence of the poor and against unbridled capitalism but the speech in this Bolivian city was the most comprehensive to date on the issues he has championed.

Francis&39; previous attacks on capitalism have prompted stiff criticism from politicians and commentators in the United States, where he is due to visit in September.

The pontiff appeared to take a swipe at international monetary organisations such as the IMF and the development aid policies by some developed countries.

"No actual or established power has the right to deprive peoples of the full exercise of their sovereignty. Whenever they do so, we see the rise of new forms of colonialism which seriously prejudice the possibility of peace and justice," he said.

"The new colonialism takes on different faces. At times it appears as the anonymous influence of mammon: corporations, loan agencies, certain &39;free trade&39; treaties, and the imposition of measures of &39;austerity&39; which always tighten the belt of workers and the poor," he said.

Last week, Francis called on European authorities to keep human dignity at the centre of debate for a solution to the economic crisis in Greece..

He defended labour unions and praised poor people who had formed cooperatives to create jobs where previously "there were only crumbs of an idolatrous economy".

In one of the sections on colonialism, he said: "I say this to you with regret: many grave sins were committed against the native peoples of America in the name of God."

He added: "I humbly ask forgiveness, not only for the offences of the Church herself, but also for crimes committed against the native peoples during the so-called conquest of America.

"There was sin and an abundant amount of it."

The audience gave Francis a standing ovation when he put on a yellow miner&39;s hat that was given to him at the end of his speech.

The pope made his speech at the end of his first full day in Bolivia, where he arrived on Wednesday. On Thursday morning he said a Mass for hundreds of thousands of people and said that everyone had a moral duty to help the poor, and that those with means could not wish they would just "go away."

The pope looked bemused on Wednesday night when Morales handed him one of the more unusual gifts he has received: a sculpted wooden hammer and sickle - the symbol of communism - with a figure of a crucified Christ resting on the hammer.

Francis leaves on Friday for Paraguay, the last stop on his "homecoming" trip.