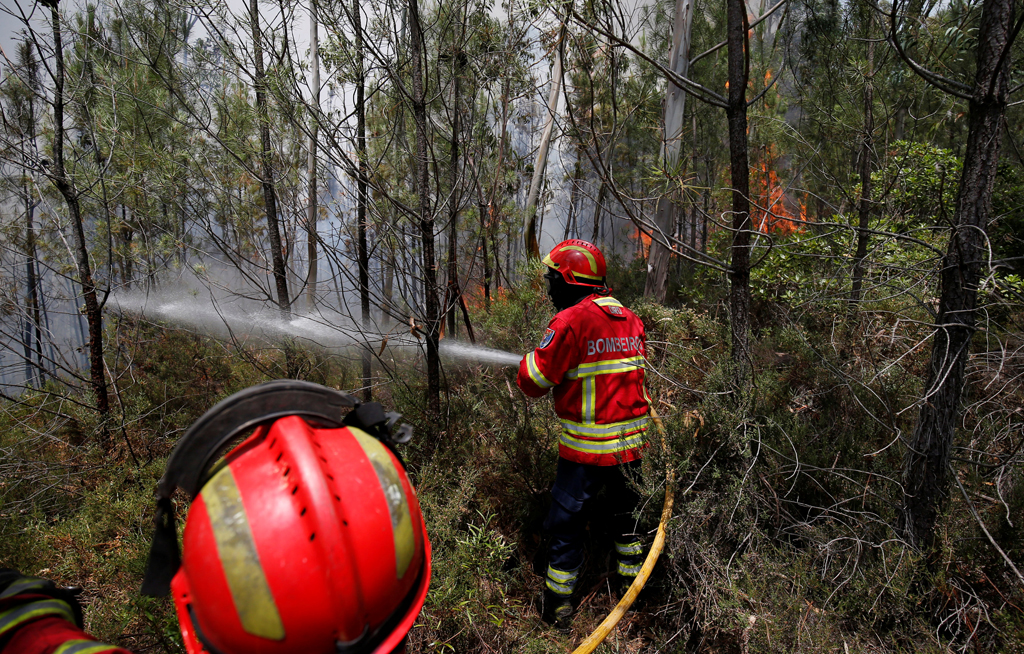 Firefighters work to put out a forest fire in Carvalho, near Gois, Portugal June 19, 2017.

PEDROGAO GRANDE, Portugal - More than 1,000 firefighters were on Monday still battling a giant forest fire that swept through central Portugal at the weekend, as the nation mourned the 63 dead.

Many victims were burnt as they were trapped in their cars around the epicentre of the blaze in Pedrogao Grande, in what is the deadliest such disaster in Portugal's recent history.

"Portugal weeps for Pedrogao Grande," said the I newspaper while mainstream Publico's headline simply read "Why?"

"The fire has reached a level of human tragedy that we have never seen before," said a visibly moved Prime Minister Antonio Costa, who announced three days of mourning from Sunday.

After the death of a firefighter who had been hospitalised, the official death toll rose to 63, officials said. The total number of injured in the region of the fire since Saturday stood at 135.

The catastrophic forest fire in Pedrogo Grande ---- has claimed already 57 lives... -- Spain and France are sending help ---- ---- Thank you ?? pic.twitter.com/i7bjiapxGN

Portugal's national Route 236 was transformed into "a road of hell" where 47 of the fatalities occurred as the ferocious blaze ripped through the wooded countryside. Most of them families who had spent the afternoon at a beach on a nearby river, local authorities said.

Although the searing temperatures had dropped slightly on Monday, the fire was still raging, spreading to neighbouring regions of Castelo Branco and Coimbra, as firefighters continued their grim search for bodies.

Local residents too have stepped in to try to stop the blaze. At the small village of Atalaia Fundeira, a big cloud of smoke billowed from a scrub of land as villagers including 76-year-old Palmira Coelho rushed out with buckets of water and a tractor arrived with a tank of water and hose.

After 10 minutes of frantic activity, the fire was largely extinguished, leaving charred ground in its wake.

"I have witnessed a lot of fires, but never like this, it's never happened here -- the way it spread, the speed," said Betty Jesus, a 50-year-old Venezuelan who has lived in the area for decades.

In the village of Figueiro, people are still traumatised by the swift-moving blaze.

"The fire didn't spread on the ground... it spread through the air at the height of the trees... in five minutes all were on fire in an area of around 10 kilometres," said Virgilio Godinho.

"Our pain is immense," said Portuguese President Marcelo Rebelo de Sousa. "We feel a sense of injustice because the tragedy has hit those Portuguese of whom one speaks little -- those living in an isolated rural zone."

Police chief Almeida Rodrigues blamed dry thunderstorms for the blaze which broke out on Saturday in Pedrogao Grande, ruling out arson. "We found the tree hit by the lightning," he said.

"Everything burnt very quickly given the strong winds. The flames passed within two or three kilometres of my house," said local resident Isabel Ferreira, 62.

"It was really hell. I thought the end of the world had come," said Maria de Fatima Nunes, another survivor.

The wooded hills in the area north of Lisbon, which 24 hours before had glowed bright green with eucalyptus and pine trees, were gutted by the flames.

Along the IC-8 highway cutting through the fire zone, smoke was still rising from the ground and small pockets of fire burned among the charred, black tree stumps.

One road running through Pedrogao Grande was littered with burnt-out cars. At one spot, a police officer watched over the covered body of a victim of the fire.

Other bodies were found in houses in isolated areas. At least three villages near Pedrogao Grande were evacuated.

At a retirement home in Pedrogao Grande on Monday, about 150 people who had been evacuated or fled were waiting to learn when they could go home.

Boxes of donated food and drinks were outside the makeshift refuge, the air still reeking of smoke.

"We have people here who are waiting for news of their loved ones, who want to know and are really anxious," said Soledade Lourenco, 51, a nurse volunteering at the centre.

About 35 forest fires continued to burn across the country on Monday, with more than 2,000 firefighters and 700 vehicles mobilised.

Spain, France and Italy have sent water-bombing planes and Greece has offered firefighters. The European Union has also offered to help.

Portugal was hit by a series of fires last year which devastated more than 100,000 hectares (1,000 square kilometres) of the mainland.

Fires on the tourist island of Madeira in August killed three people, while across 2016 around 40 homes were destroyed and 5,400 hectares of land burned.