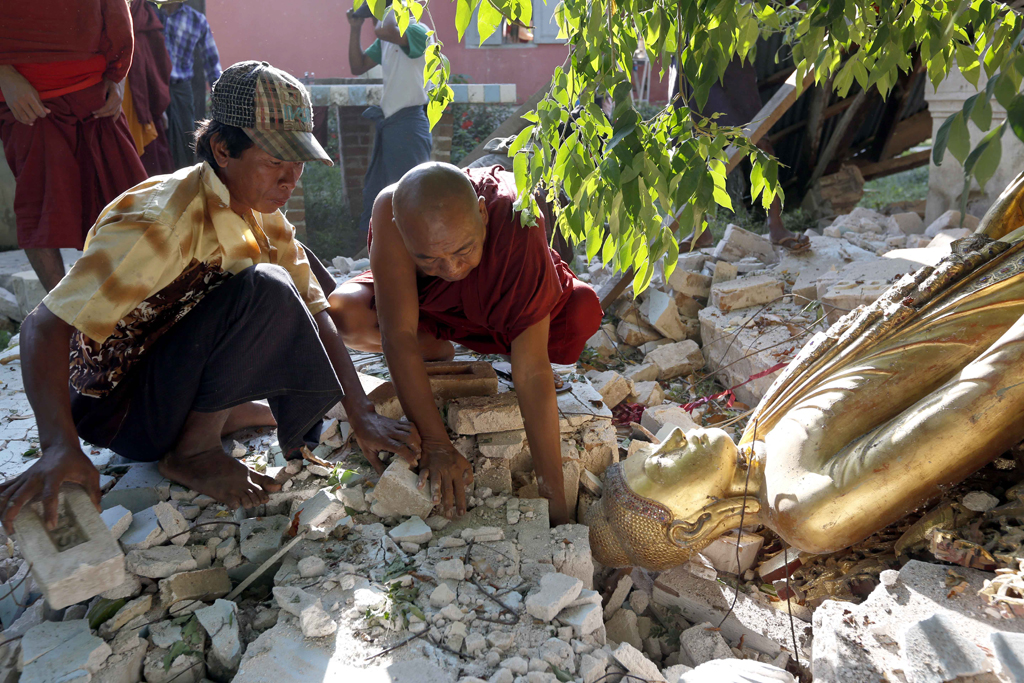 FILE. A Buddhist monk and others search through rubble near Buddha statue in a monastery, KhuLe village, SintKu township, Mandalay Division, Myanmar, 12 November 2012.

The quake, which the agency said struck at a depth of 84 kilometres (52 miles), swayed high-rise buildings in the Thai capital of Bangkok, AFP journalists reported.

It was also felt in the Indian city of Kolkata, rocking tall structures and sending panicked residents out onto the streets.

The quake was felt throughout south and southwestern Bangladesh close to the border with Myanmar, with television footage showing residents running into the streets.

At least 20 people were injured as panicked workers tried to flee a building in the industrial area of Savar outside Dhaka, ATN Bangla television reported.

"All of us ran to the streets leaving the houses and shops unsecured as the quake seemed very dangerous," Nazmus Sakib from the southern city of Chittagong close to the Myanmar border wrote on his Facebook wall.

There were no immediate confirmed reports of casualties in Myanmar, but officials said they were checking early reports of damage to several pagodas in the Buddhist-majority country.

The epicentre struck near Chauk, a town on the Irrawaddy River around 30 kilometres south of Bagan, Myanmar&39;s most famous archaeological site and home to more than 2,500 Buddhist monuments.

A police officer from Bagan told AFP his team is looking into reports that several temples were damaged.

"We received initial information that several famous pagodas were damaged. We need more confirmation from our team on the ground. We haven&39;t heard of anyone being hurt," he said, requesting anonymity.

Soe Win, a regional MP from Chauk, the town near the epicentre in central Magway region, told AFP the tremors lasted for several minutes.

"There was also some sound as well. A pagoda collapsed in Salay and a building also collapsed," he told AFP, adding that he has not yet heard of any casualties.

The USGS estimated that the impact would be "relatively localised" but noted that many buildings in the region are "highly vulnerable" to earthquake shaking.

Earthquakes are relatively common in Myanmar, though the country has not seen a major quake since 2012.

The last major quake struck in a nearby region in April and caused minor damages but no casualties.