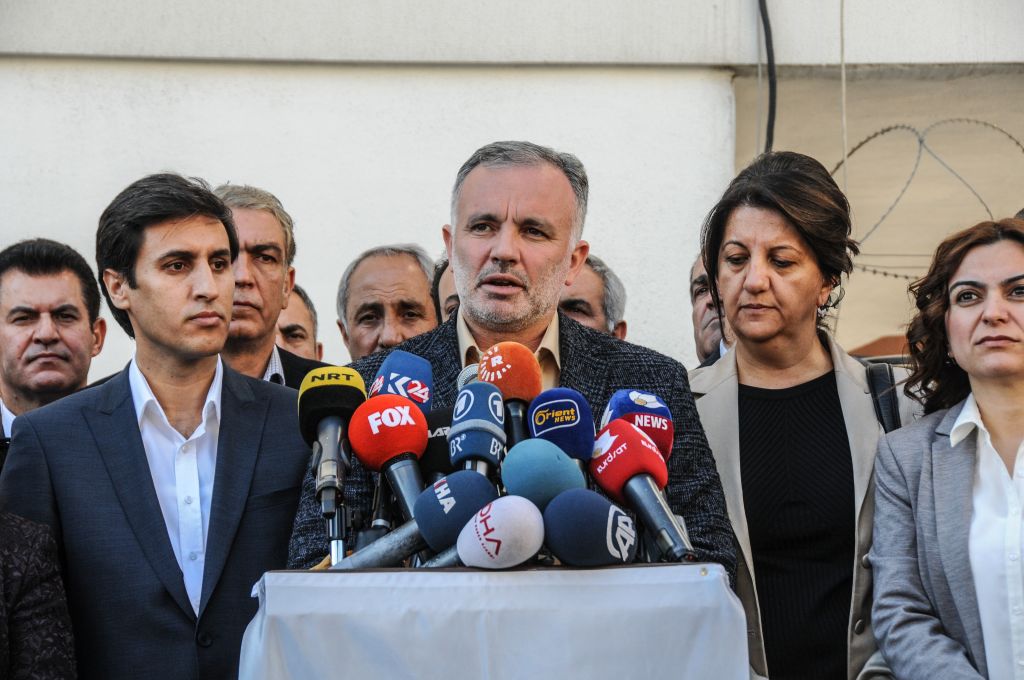 Parliament member of Pro-Kurdish Peoples' Democratic Party (HDP) and spokesman Ayhan Bilgen (C) speak on November 6, 2016 during a press conference in Diyarbakir where the party said it was halting all its activities in the Turkish parliament.

ISTANBUL, Turkey - Turkey's main pro-Kurdish party on Sunday said it was pulling out of parliament after nine of its MPs including the two co-leaders were arrested in an unprecedented crackdown.

The Peoples' Democratic Party (HDP), the third-largest party in this legislature, said it would no longer be taking part in general sessions of parliament or commission work.

The arrest on Friday of the MPs, including charismatic party leaders Selahattin Demirtas and Figen Yuksekdag, added to tensions as Turkey wages a relentless battle against Kurdish militants and deals with the aftermath of the July 15 failed coup.

The move also compounded concerns among Turkey's Western allies that the state of emergency imposed after the coup bid is being used for a general crackdown against critics of President Recep Tayyip Erdogan and not just the suspected plotters.

On Saturday, an Istanbul court ordered the jailing pending trial of nine executives and editorial staff from the opposition Cumhuriyet newspaper.

Some 35,000 people have been arrested after the coup bid, which Ankara blames on the US-based preacher Fethullah Gulen, while tens of thousands more have been fired from their jobs.

The latest arrests of the HDP MPs prompted the Turkish authorities to restrict access to social media and VPN applications and also led to more heavy losses for the embattled Turkish lira.

The HDP said instead of sitting in parliament, its remaining MPs who are not under arrest will go from "house to house, village to village and district to district" to meet people.

It said that at the end of these consultations, proposals will be made over how to go forward.

The HDP has 59 seats in parliament and their absence could enable Erdogan to push through his vision of a presidential system which the HDP has always vehemently opposed.

HDP party spokesman Ayhan Bilgen, calling Turkey at a "turning point", told local media that any decision on whether to replace the imprisoned Demirtas and Yuksekdag at the helm of the party while they were jailed would be taken in the next days.

They have been charged with membership and promotion of the outlawed Kurdistan Workers Party (PKK).

The HDP has always vehemently denied being a front for the PKK, which has waged an over three-decade insurgency against the Turkish state in search of greater rights and autonomy for the Kurdish minority.

Integrating the Kurdish movement into mainstream politics was a key plank of the peace process once spearheaded by Erdogan which collapsed when a truce ruptured in 2015.

Washington and the European Union reacted angrily to the arrests, with EU foreign affairs chief Federica Mogherini and EU Enlargement Commissioner Johannes Hahn saying Yuksekdag and Demirtas were "our trusted and valued interlocutors."

"These developments... compromise parliamentary democracy in Turkey," they said.

Following the criticism, EU Affairs Minister Omer Celik invited EU envoys to a meeting Monday where he will give an address "on the latest developments in our country", the ministry said in a statement.

Turkey's bid to join the EU dates back to the 1960s with formal talks starting in 2005. But the process has been mired in problems and set back further by recent threats by Erdogan to bring back the death penalty.

Turkish police used tear gas and plastic bullets Saturday to disperse a demonstration in Istanbul against the arrests, and a similar march was expected Sunday in the southeastern city of Diyarbakir.

A bomb attack in Diyarbakir on Friday left 11 people dead, with Turkey saying it was the work of the PKK. But the Amaq news agency, affiliated to Islamic State (IS) extremists, claimed it for the jihadists.

"The fight against terror will continue until there is not a single terrorist remaining," Prime Minister Binali Yildirim said in a speech in the eastern city of Erzincan.