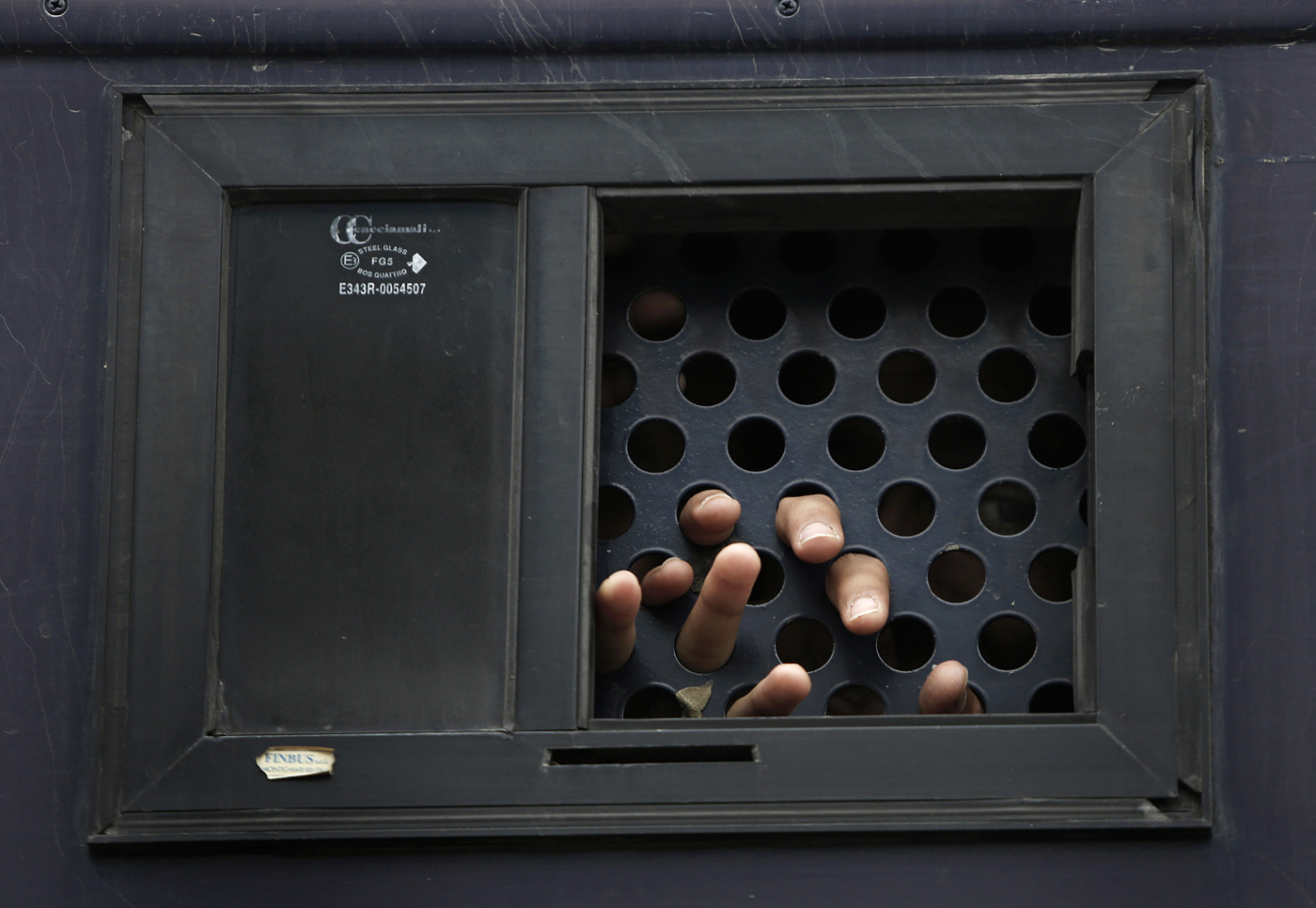 A man who was declared an economic migrant pokes his fingers through the grill of a police vehicle outside a stadium in Athens, Greece on December 16, 2015.

ORESTIADA – Hundreds of people protested in north-east Greece on Sunday against the security fence along the Turkish border, demanding the opening of safe routes for refugees, two days after 45 died making the risky Aegean Sea crossing.

Demonstrators, some wearing life jackets as a symbol of the flow of thousands of people making the perilous sea journey from Turkey to Greece, marched from the village of Kastanies, which lies close to the frontier.

Police stopped the marchers a few hundred metres away from the border fence, located in a restricted-access military zone.

The protesters waved placards demanding the opening of borders and a group of Pakistanis carried a picture of drowned Syrian toddler Aylan Kurdi. A picture of his body lying on a beach became a global symbol of Europe&39;s refugee crisis.

With 35% of sea arrivals to Greece children, the @Greenpeace @MSF rescue boat often looks like a kindergarten... pic.twitter.com/gaOIqeWjsN

Europe is battling to deal with its biggest migration crisis since World War II, but member states are split on what to do and despite deteriorating winter weather, thousands are attempting the risky sea passage every day.

In the latest tragedy, on Friday coastguards pulled 45 bodies including 20 children from the cold waters of the Aegean after their boats capsized while on their way to Greece.

Kotzias said Frontex should deploy about 100 boats in the narrow stretch of water separating Greece from Turkey, the main launching pad for 850,000 refugees and migrants who reached Greece&39;s shores last year.

Long a hotspot for illegal migration, the Greece-Turkey land border was secured in 2012 with a 12.5km fence despite concerns from the European Commission.

Some campaigners have argued a corridor should be opened for refugees to enter Greece, but the authorities have rejected the idea, with other EU countries putting pressure on Athens to do more to stem the flow of people.

"It is not a bad thing that this fence exists... Greece cannot take any more people than it is at the moment," Foreign Minister Nikos Kotzias said on Saturday at the end of a trip to Berlin, according to Greek news agency Ana.

Ankara reached an agreement with the EU in November to stem the flow of refugees heading to Europe, in return for financial assistance of €3-billion (R53,3bn) in cash.

After talks with Turkish Prime Minister Ahmet Davutoglu in Berlin on Friday, German Chancellor Angela Merkel said both sides signed an agreement to "do everything to reduce the number of refugees" crossing into the EU.

Sunday&39;s protests came on the eve of a meeting in Ankara between senior EU officials and the Turkish government on further implementation of the November agreement.

EU response to the migrant crisis of their making, draw up plans to effectively abandon Greece and Italy - obscene! pic.twitter.com/n1zOdktlj1

Never seen my friend Ghassan cry. But his voice broke when he was talking about his recent efforts helping Syrian refugees in Greece.