We don't want this corporate bullsh* - Milan erupts on May Day 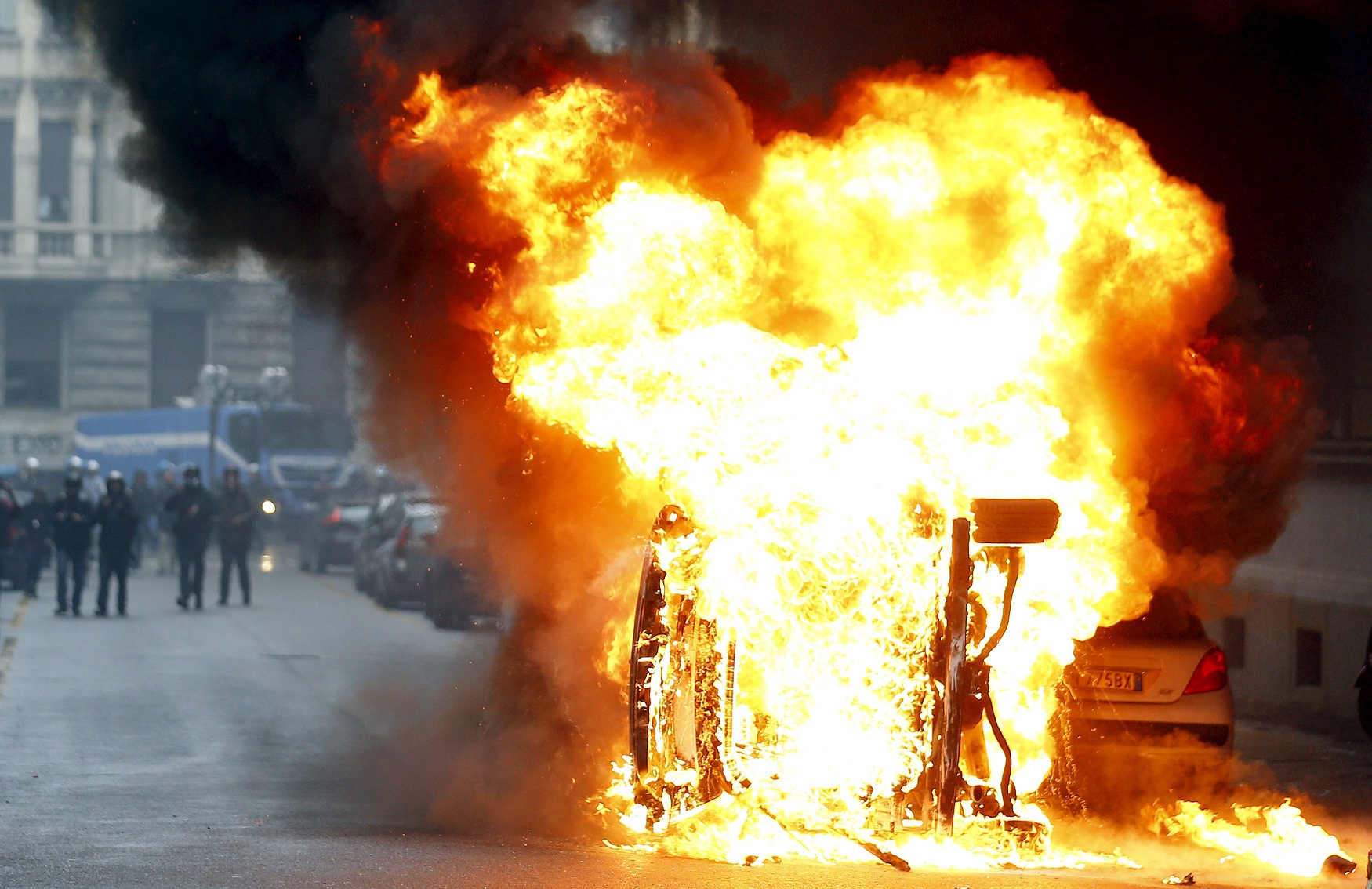 MILAN - The opening of Expo 2015 was marred on Friday by violent clashes between police and opponents of Milan&39;s hosting of the first world fair since Shanghai five years ago.

Police fired tear gas at stone-throwing, masked protestors who had smashed windows and torched several cars and bins during a "No Expo" march which organisers said had brought 30,000 people onto the streets.

Water cannons were used to put out blazes, including one at a bank branch where the wall had been graffiti-ed with the words: "You&39;ve skinned us, today you pay."

The violent scenes helped make it a distinctly bitter-sweet start to a six-month food-themed event Italy hopes will bolster its international standing and give a boost to the struggling economy.Thousands of visitors poured into the specially created site on the edge of Milan. After months of concern about delays partly linked to a corruption scandal which hit the organisation last year, it appeared most of the key construction work for the Expo had been finished in the nick of time.

But there was grumbling from participants over organisational problems which meant many of the pavilions and exhibits were not fully operational.

A policeman fires tear gas during a rally against Expo 2015 in Milan, Italy, May 1, 2015.   (Picture: REUTERS/Alessandro Bianchi)

Declaring the fest open, Prime Minister Matteo Renzi bullishly insisted Milan and Italy had defied the critics who had said they would never be ready in time.

"They said we would never do it but today the Expo is a reality," Renzi said, paying tribute to workers who have been labouring round the clock for weeks to ensure the show went ahead.

"In these coming months, the world will be able to taste Italy, its specialities but especially the profound desire it has to write a new chapter of hope," Renzi said.

A man rides a bicycle in front of a burning office during a rally against Expo 2015 in Milan, Italy, May 1, 2015. (Picture:REUTERS/Alessandro Bianchi)

No frites and beer

But exhibitors were confronted with an assortment of issues.

Belgium&39;s pavilion opened with only a food-themed diamond exhibition on display and none of the country&39;s celebrated beer and frites (fries) to serve up.

"The beer is in a warehouse 500 metres from here but we couldn&39;t bring it in because the site was sealed off for a security sweep until 3am this morning," said Sebastien Steven, the pavilion&39;s restaurant manager. "We feel a bit let down. There has been a lot of disinformation."

Bangladesh reported similar problems. "We can&39;t open because we don&39;t have any staff," said MD Abdul Matin, its operations manager. "Our display was to be mainly cooking based but the chefs and other staff were all due to come from Bangladesh and the Italians have not granted their visas."

An official at Ireland&39;s pavilion said: "Problems? just a bit. Anything to do with accreditation here has been a complete nightmare."

Organisers insisted the problems would be ironed out quickly.

But the "No Expo" movement does not look like it is going away.

"Our generation does not want this corporate bullsh**," one militant, who gave her name as Annalisa, told AFP.

The protesters have been angered by Expo&39;s reliance on volunteer workers, the involvement of corporations like McDonalds and Coca-Cola and a perception that much of the public money ploughed into the project has been lost to corruption.

Italy secured the rights to host the Expo seven years ago, long before Renzi came to power last year. But he has embraced it as an opportunity for the country to show the world that it is regaining its confidence and reinventing itself under his leadership.

The event plays to food-loving Italy&39;s strengths with its nutrition and gastronomy-based theme of "Feeding the Planet, Energy for Life".

Organisers are predicting 20 million visitors over six months and a 10-billion-euro boost to economic activity.

Protesters throw objects during a rally against Expo 2015 in Milan, Italy, May 1, 2015.  (Picture:REUTERS/Alessandro Bianchi)

Scenes of war in Milan, violent protests before the fair,,,,,http://t.co/eE0LPU79d5 pic.twitter.com/5vJNQso6WB

The intention of the Milan Expo2015 was to revive an ailing economy but protests have turned the city upside down pic.twitter.com/ExLFKNeqYi