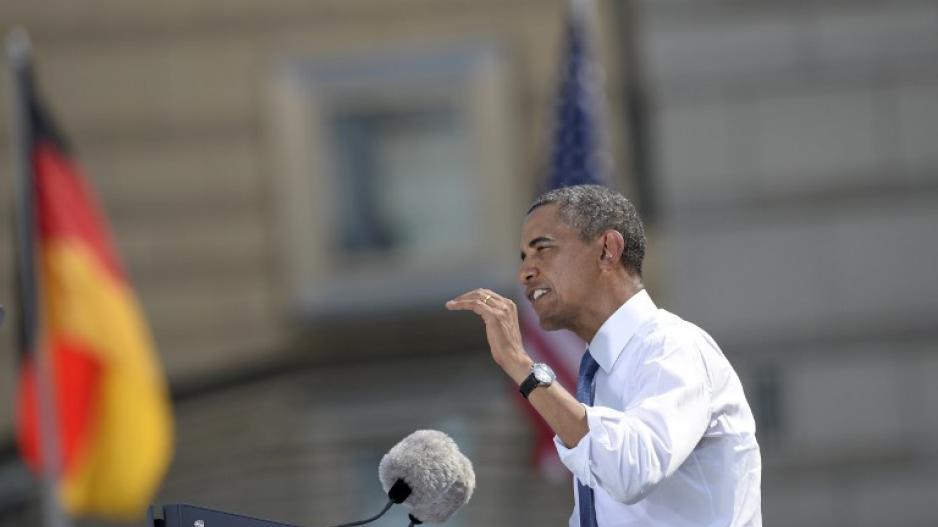 US President Barack Obama delivers a speech at the Brandenburg Gate on June 19, 2013 in Berlin.

Berlin - Russian President Vladimir Putin said that Russia will not allow for an imbalance in strategic nuclear deterrence, speaking ahead of a speech by US President Barack Obama about major new arms reductions.

"We cannot allow the balance of the system of strategic deterrence to be disturbed or the effectiveness of our nuclear force to be decreased," Putin was quoted by Russian agencies as saying at a government meeting while discussing Russia&39;s military space programme.

Barack Obama is expected to propose major cuts in US and Russian nuclear stocks, making a pitch for his own place in history in an evocative open-air speech during his first visit as president to Berlin.

Ahead of the address to around 6,000 people at the fabled Brandenburg Gate, the US leader also took pains to assure Germans that US Internet and phone surveillance programmes were strictly limited and a vital tool against terror.

The US president was set to use his speech to propose cutting US and Russian strategic nuclear warheads to around 1,000 each, and also seek cuts in tactical nuclear arms stocks in Europe.

"We will seek to negotiate these reductions with Russia to continue to move beyond Cold War nuclear postures," a senior US official said.

It remains unclear whether Russian President Vladimir Putin, with whom Obama had a frosty meeting at the G8 summit in Northern Ireland on Monday, will agree to such substantial weapons cuts.

In Moscow, a Kremlin spokesman said Russia had told the United States it wanted other nuclear armed states to commit to reductions.

The United States has around 20 nuclear warheads still stationed in Germany, down from about 200 when the Berlin Wall fell in 1989.

Germans had eagerly awaited the pageantry of Obama&39;s first trip to their capital as president, but his arrival had been preceded by sharp questions about the scope of National Security Agency (NSA) programmes.

Obama, under fire at home and abroad over the snooping, sought to assure Germans the system was limited in scope and legal.

"This is not a situation where we are rifling through, you know, the ordinary emails of German citizens or American citizens or French citizens or anyone else," Obama said after meeting German Chancellor Angela Merkel.

He argued that "lives have been saved" because of the use of the surveillance system.

"We know of at least 50 threats that have been averted - not just in the United States, but in countries around the world, including Germany," he said.

The programmes, which have special resonance in a nation where snooping operations by the communist Stasi secret police are a painful memory, have triggered alarm in Berlin.

Merkel, who grew up in the former communist East Germany, said basic freedoms depended on people being able to feel safe "and therefore the question of balance, the question of proportionality, is something that we will further discuss with one another."

Obama remains popular in Germany - a poll this week for Die Zeit newspaper showed that 60% of Germans were satisfied with his leadership.

And 42% said he was more successful than Merkel, Germany&39;s most popular post-war leader who is standing for a third term in September elections, versus 34% percent who thought the chancellor had achieved more.

But he will struggle to meet the expectations he spun for himself as a presidential candidate, in a speech to a crowd of 200,000 in Berlin in 2008 that made him a political star in Europe.

Since that call for a joint US-European bid to "remake the world" by battling terrorism, global warming, Middle East violence and poverty, Obama has learned the power of the status quo at home and abroad to thwart change.

But frustration will not temper his rhetoric, according to US deputy national security advisor Ben Rhodes.

"Any time a US president speaks in Berlin, it&39;s a powerful backdrop to our post-war history," said Rhodes.

"The overarching point that he&39;s going to make is the exact same level of citizen and national activism that was characterised in the Kennedy speech and in the Cold War needs to be applied to the challenges we face now."

Merkel pointed out that Obama would later speak in front of an open Brandenburg Gate, unlike his predecessors.

"Other presidents had to say that the Wall must go. It&39;s gone, and for this we can also thank our American friends and partners," said Merkel, who had talks and lunch with Obama and was set to meet him again for dinner.

The speech comes just ahead of the 50th anniversary of Kennedy&39;s "Ich bin ein Berliner" address, two years after the erection of the Berlin Wall.

Brandenburg Gate itself was the backdrop when Reagan famously beseeched then Soviet leader Mikhail Gorbachev to "tear down this wall" in 1987.

Germany&39;s troubled history was also the theme for First Lady Michelle Obama, who was joined by her two daughters on a tour that took in the Holocaust memorial and a stretch of the Berlin Wall.