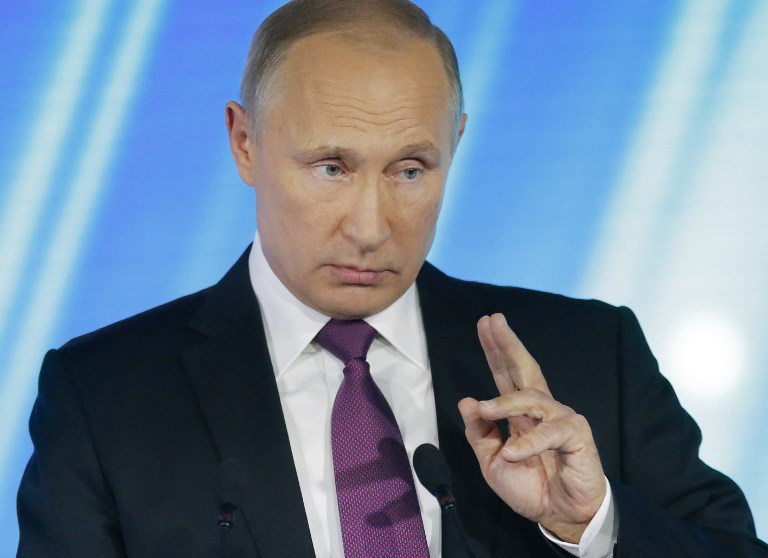 Russian President Vladimir Putin gestures while delivering a speech at the annual Valdai club conference of international experts in Sochi on October 19, 2017.

MOSCOW - President Vladimir Putin on Wednesday said he would seek a new six-year term in March elections, a move that would make him the longest-serving Russian leader since Joseph Stalin.

Putin, who has run Russia both as president and prime minister for the past 18 years, is expected to sail to victory, with only token opponents competing against him.

"I will offer my candidacy for the post of president of the Russian Federation," he said during a visit to the GAZ car factory in Nizhny Novgorod, 400 kilometres (250 miles) east of Moscow.

He made the widely-expected announcement surrounded by cheering workers, who had prodded him to say whether he would seek a fourth presidential term in a carefully-choreographed ceremony.

"There is perhaps no better place and better excuse to announce this," Putin said. "Russia will go only forward. And no-one will ever stop her."

But top Putin critic Alexei Navalny, who has declared a Kremlin bid despite not being allowed to run due to a suspended sentence for fraud, called the president a "swindler."

Social networks were abuzz, with many ridiculing the Kremlin strongman and some comparing him to Robert Mugabe, the ousted leader of Zimbabwe.

"Vladimir Vladimirovich has decided to play the old Russian game dubbed &39;Out of the Kremlin feet first,&39;" said one critic, Aleksandr Kommari, on Facebook.

Muscovite Kirill Goncharov said he went to school and graduated from the university under Putin.

"Time -- the most important thing every person has -- will be wasted on Vladimir Putin realising his personal ambitions," he said on Facebook.

Putin&39;s statement came as Russia reeled from a decision by the International Olympic Committee to ban the country from the Winter Games as punishment over claims of state-orchestrated doping.

But despite a litany of problems including corruption, poverty and poor healthcare, the 65-year-old leader enjoys approval ratings of 80 percent.

Do you trust me

Just hours earlier Putin visited a glitzy ceremony for volunteers in Moscow where he sought to rouse supporters.

"I want to ask, do you trust and support me?" he addressed the huge audience of mostly young people. "Yes," the audience chanted.

Prominent athletes and Soviet-era celebrities such as 83-year-old actor Vasily Lanovoi, took to the stage to extol Russian successes, such as Soviet victory in World War II.

Putin has sought to appeal to the country&39;s youth after thousands of young Russians took to the streets earlier this year to protest alleged corruption among elites, targeting Prime Minister Dmitry Medvedev among others.

The demonstrations were sparked by a documentary fronted by Navalny.

Putin first became president after Boris Yeltsin sensationally resigned on New Year&39;s Eve 1999. At the end of his second term in 2008 he handed power to his protege Medvedev.

No one on the horizon

Putin then served a term as prime minister -- although few doubted who was really in charge -- and returned as president in 2012.

If he extends his rule to 2024, Putin will have led Russia longer than Leonid Brezhnev, who presided over an era of stagnation from 1964 to 1982 and became the target of derision in his later years.

Some analysts say that after 18 years of leadership -- both as president and prime minister -- Putin fatigue may be spreading across the country.

Many Russians say they would vote for Putin simply because they do not see an alternative, given the former KGB officer&39;s chokehold on domestic politics.

"So far he is the only one on the horizon," Sergei Inshakov, a 36-year-old part-time taxi driver and former professional handball player, told AFP.

"It will be better, more dependable for everyone this way."

With the result of the election a foregone conclusion, turnout could be low, harming the Kremlin&39; hopes for a clear mandate, observers say.

According to a poll conducted by the independent Levada Centre pollster last month, just 58 percent of respondents said they would vote, down from 75 percent in December 2007.

What will happen after 2018

Putin&39;s spokesman Dmitry Peskov said this week that those figures came ahead of the start of a political campaign and would grow.

Many expect Kseniya Sobchak, a 36-year-old glamourous former host of a television reality show and daughter of Putin&39;s former mentor, will likely be allowed to run, rekindling some public interest in the election.

But what comes after Putin&39;s expected re-election and later, after his new term ends in 2024, is the bigger question, analysts say.

"The main intrigue is, what will happen after 2018, how the configuration of power will be changing," Tatyana Stanovaya, a Paris-based analyst for the Centre of Political Technologies in Moscow, told AFP.

Speculation has swirled over the past weeks that the Kremlin may be considering changes to the constitution or a new job for Putin in an effort to extend his grip on power beyond 2024.

"The main task for the Kremlin is to adapt the regime to Putin&39;s future status -- be it an extension of presidential powers or the creation of a new post," said Stanovaya.