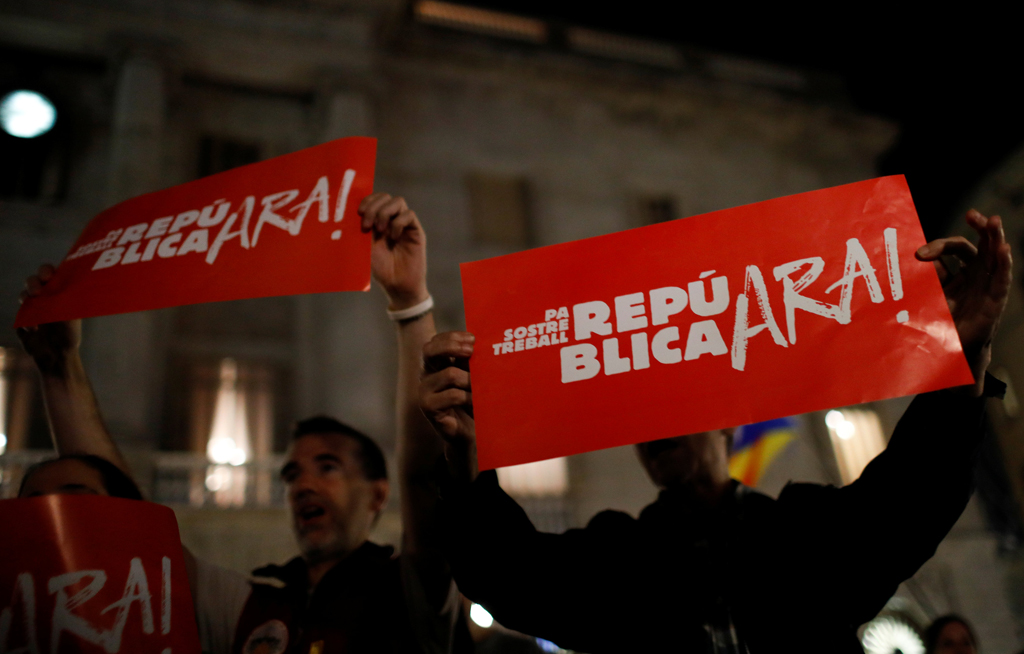 BARCELONIA - Catalonia appeared Wednesday to be steering for a head-on clash with Spain after its separatist leader snubbed senators in Madrid preparing to depose his independence-seeking government in two days.

As pro-secession activists gathered on the streets of Barcelona, Carles Puigdemont turned down an invitation to come and discuss his threat of a unilateral Catalan breakaway.

His refusal left little hope that Spain&39;s move to replace the Catalan government by the weekend and take over control of its institutions, police, and finances, can be avoided.

Puigdemont&39;s team sought to shift blame for the stalemate onto Prime Minister Mariano Rajoy, who said Wednesday that triggering Article 155 of the Spanish constitution, devised to rein in rebel regions, was "the only possible response" to Catalonia&39;s independence push.

The central government interpreted a source close to Puigdemont, "has already announced that it will implement Article 155 no matter what".

On his official Instagram account, Puigdemont said late Wednesday: "We will not waste time with those who have already decided to devastate the self-government. We continue!", using the hashtag CatalanRepublic.

The worst political crisis in Spain in decades was sparked by a "Yes" vote in a banned October 1 referendum on independence for the semi-autonomous region which accounts for 16 percent of Spain&39;s population and 20 percent of its economic output.

The region of 7.5 million people is fiercely protective of its language and culture and has long struggled for autonomy -- which was restored after the repressive 1939-1975 rule of dictator Francisco Franco.

Contempt for our laws

Catalans, however, are deeply divided on independence from Spain, and only about 43 percent of eligible voters -- some 2.3 million -- turned out for the unregulated referendum.

Puigdemont subsequently announced, and suspended, a unilateral declaration of independence, prompting Madrid to turn to the never-before-used Article 155. It gives the government ill-defined and untested powers when the country&39;s "general interests" come under threat.

Only two days remain before the senate, where Rajoy&39;s Popular Party holds a majority, approves measures stripping Puigdemont and his executive of all power.

The measures would come into effect once published in the government gazette on Saturday, and remain in place for up to six months -- until elections are called and a new Catalan parliament sworn in.

The Catalan parliament has scheduled its own meeting for Thursday afternoon to formulate a response.

Some fear the 135-member parliament, in which pro-secessionists hold a majority, may vote to carve Catalonia off from Spain, a move Madrid would resist fiercely.

Calling elections, on the other hand, is widely seen as a move that could hold Madrid at arm&39;s length, at least for a while.

As the pressure built, cracks appeared between separatist leaders on the options.

Several members of Puigdemont&39;s executive urged elections rather than rebellion at a weekly meeting on Tuesday, a source close to the Catalan leader told AFP.

Other allies, however, will accept nothing less than independence.

Civil society groups, too, piled on the pressure, marching on the offices of the Catalan executive, the Generalitat, on Wednesday evening to push for the independent Catalan Republic.

Committees for the Defence of the Referendum -- civilian groups set up to defend the October 1 vote and now spread out across Catalonia -- called a protest under the banner "No 155, no elections. A republic now."

A few hundred protesters brandished posters reading "Independence, not a step back, liberty".

"We want a republic, we do not want to continue under the Spanish government and dictatorship," Jaime Planas, a 66-year-old retiree, told AFP.

"Europe will have to take a stand," he said. "They say the law cannot be broken, but when things are unjust, they have to be overcome."

An anti-independence march is planned for Sunday in Barcelona.

Whatever happens, observers fear the standoff will spark unrest in the northeastern region where tourism numbers have dropped and close to 1,500 companies have removed their legal headquarters since the banned referendum.

Alfred de Zayas, a democracy expert with the UN&39;s human rights office, urged the Spanish authorities to enter into negotiations with Catalonia.

"I deplore the decision of the Spanish Government to suspend Catalan autonomy," he said in a statement from Geneva. "This action constitutes retrogression in human rights protection."