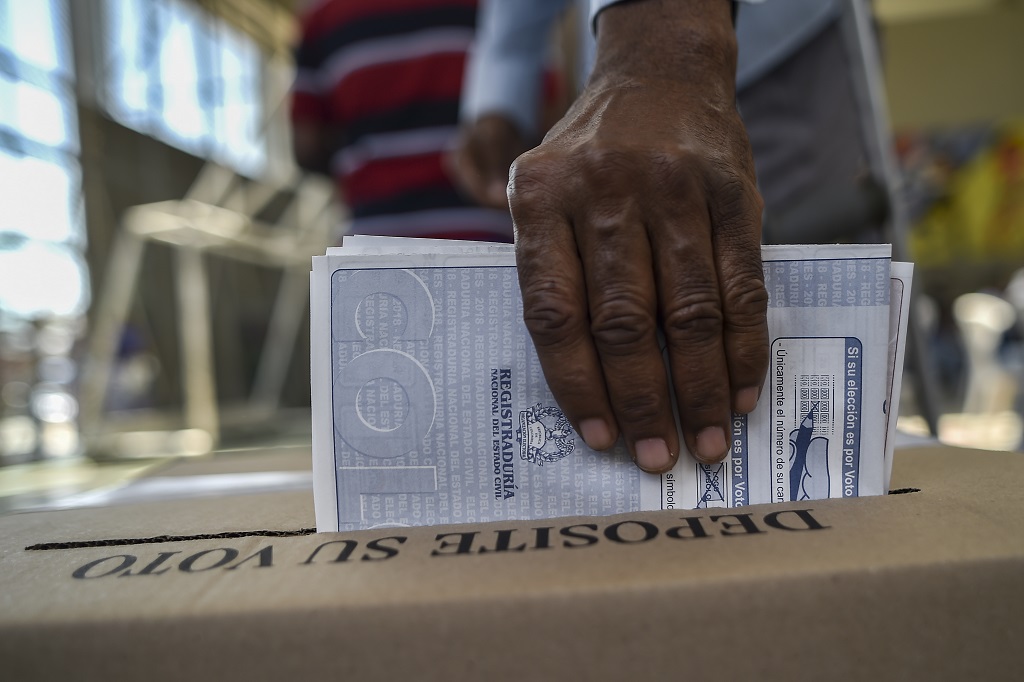 A man casts his vote at a polling station in Cali, Valle del Cauca Department, during parliamentary elections in Colombia on March 11, 2018.

BOGOTA, Colombia - Right-wing parties opposed to a peace deal with the Revolutionary Armed Forces of Colombia (Farc) won historic elections in Colombia Sunday but fell short of a majority in polls that saw the former rebels enter the Congress.

The hardliners&39; victory raises questions about the future of the peace agreement signed with President Juan Manuel Santos in November 2016.

Santos said the polls were "the safest, most transparent elections" in the country&39;s recent history, with the FARC spurning jungle warfare for politics, and the ELN - the country&39;s last active rebel group -- observing a ceasefire.

"This is the first time in more than half a century that the Farc, instead of sabotaging the election, are taking part in it," he said, adding that the ELN had "respected" their ceasefire.

The Centro Democratico party of ex-president and senator Alvaro Uribe, a fierce opponent of the peace agreement, polled the most votes, winning 19 seats in the Senate and 33 in the lower house.

But centrist and leftist parties also polled strongly to deprive the right of a majority.

"There are no big changes, there are adjustments," Frederic Masse, an expert in armed conflict and the peace process at Externado University, told AFP.

The peace accord with Farc guarantees their new political party 10 of the 280 seats in the new Congress, five in the Senate and five in the Chamber of Deputies.

"It&39;s the first time in my life that I&39;ve voted and I do it for peace," said Pablo Catatumbo, a former Farc commander who was assured a senate seat.

The party uses the same Spanish acronym, which now stands for the Common Alternative Revolutionary Force, and replaced its crossed-rifles insignia with a red rose when it became a political party under the deal.

Opinion polls had given the FARC little chance of adding to its 10 free seats, following a disastrous campaign during which its rebels-turned-politicians were largely drowned out by a tide of public revulsion over crimes committed during the conflict.

In the end it polled 0.35 percent in the Senate vote, and only 0.22 percent of the vote for the lower house. Analysts said the party would now focus on building grassroots support for upcoming local elections.

Voters also chose the candidates from the right-wing and leftist coalitions who will contest the presidential election in May, in primaries held in parallel to the legislative vote.

Ivan Duque, of Uribe&39;s party, won the right-wing primary with more than 2.7 million votes, or 67 percent of the poll, and will spearhead hardline opposition to the peace deal.

Gustavo Petro, a former Bogota mayor who is seeking to become conservative Colombia&39;s first leftist president, will oppose him after winning nearly two million votes, 85 percent of the poll, in his primary.

Opinion polls had predicted a triumph for hardline conservatives like Uribe who want to scrap the agreement, pushing on to win the presidential election in a few months.

Under the peace accord, FARC disarmed its 7,000 fighters in order to join the political process, agreed to confess to wartime crimes and pay reparations to victims.

This infuriates many Colombians, in particular the right wing, which is vowing to win the presidential election and amend the peace deal.

Maria Maldonado, a 65-year-old pensioner who voted in Bogota, was in no mood to forgive and forget.

"I have a lot of memories. Of all the compatriots who were murdered and buried, and nothing happened. And now we&39;re going to allow these people to manage us knowing that they have left us so many tragedies?" she said.

But much of the peace agreement has already been implemented, including the rebels disarming and demobilising.

Analysts say a hard-right government could block the implementation of the rest of the pact, including agrarian reform and the special justice deal under which repentant rebels can avoid jail by paying reparations.

"The mere fact of not applying what has been signed would be enough for this agreement to be ineffective," said Frederic Masse, an expert on the conflict at Colombia&39;s Externado University.

Santos, who signed the peace agreement with the Farc in November 2016, is stepping down as president in August after two terms.

The first round of the presidential election is set for May 27, with the runoff planned for June 17.

Sunday&39;s elections were held against the backdrop of economic concern in Colombia, which registered 1.8 percent growth in 2017, its weakest for nearly a decade.

Candidates were angered when officials ran out of ballot papers for the primaries, citing budgetary problems, and the public prosecutor&39;s office said it would open an investigation.

"Due to budget problems, not all cards were printed," elections registrar Juan Carlos Galindo told reporters.

Only 15 million cards were printed for an electorate of 36 million, he said.

Galindo said he had approved of photocopies being used for polling stations where the cards had run out.

Finance Minister Mauricio Cardenas, whose office manages the election budget, said the number of printed ballots were made based voters&39; records in Colombia, where abstentionism typically runs to around 60 percent.