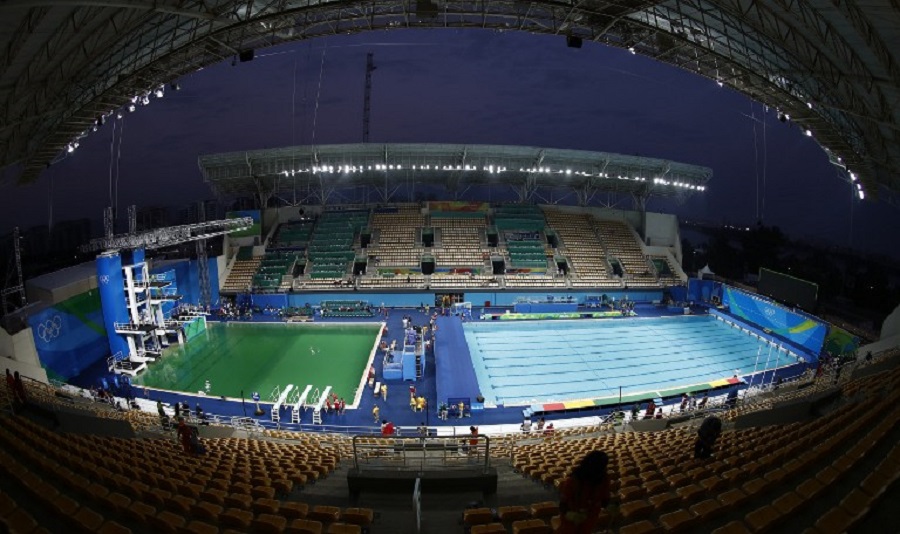 A general view shows the pool before the Women's Synchronised 10m Platform Final as part of the diving event at the Rio 2016 Olympic Games at the Maria Lenk Aquatics Stadium in Rio de Janeiro on August 9, 2016.

RIO DE JANEIRO - The "embarrassing" emerald green water in the pools at the Rio aquatics centre that left some athletes with itchy eyes is the result of an unplanned dump of hydrogen peroxide into the water, Olympic organisers said on Saturday.

A contractor added 80 litres of hydrogen peroxide to each of the diving and water polo pools last Friday but organisers said they only found out on Tuesday when the water in the diving pool turned green from its typical blue during the women&39;s 10 metre platform final.

According to organisers, the addition of hydrogen peroxide neutralised the chlorine and allowed algae to bloom.

"This is a way of cleaning swimming pools but you&39;re not supposed to combine it with chlorine," Gustavo Nascimento, Rio 2016&39;s director of venue management, told reporters.

"We were not consulted, our contractor&39;s failure is our failure."

The green pools have become a huge headache for organisers of the Rio Games, becoming the butt of "swamp" jokes among the millions of spectators in the stands and watching in television. Some water polo players have complained about itchy eyes.

The electronic monitoring system for the pools at the Maria Lenk Aquatics Center was functioning but was fooled by the chemical reaction to think that the chlorine was still working, Nascimento said. The fact that 120 athletes were using the diving pool also increased the amount of "organics" in the water, he added.

To treat the water, which organisers said does not pose any risk to athletes, they have been stabilising the chemistry and trying to make the algae more dense to clean it up but were racing against time to avoid disrupting competition schedules.

Nascimento said 10 hours will be spent draining and replacing the water in the pool that will be used for the synchronised swimming event, which begins on Sunday, where competitors need to see each other under water.

The organisers will keep the water in the diving pool and continue treatment, as it did not seem to concern the athletes as much, they said.

By Saturday afternoon, the water in the water polo and synchronised swimming pool had already turned a cloudy blue, while the diving pool remained a murky blue-ish green.

Rio Games spokesman Mario Andrada, who declined to answer questions on who the contractor was or who would pay for the treatment, had previously said the issue would be solved by Wednesday but admitted they had overpromised and undelivered.

"Of course it&39;s an embarrassment," said Andrada. "This was probably the only issue that we were unable to solve quickly."

Luckily for them, divers have been taking it in their stride.

"When the water&39;s too murky you can&39;t see the bottom of the pool so it affects your target point when you&39;re doing your turns in the air," China&39;s Shi Tingmao said after placing first in Saturday&39;s women&39;s 3 metres springboard semi-finals. "So it has some impact but it&39;s not a big problem."

American Abby Johnston, who also qualified for the final, said her "chemistry brain was going &39;what?&39;" when told about the hydrogen peroxide dump.

"But it&39;s a fun thing for all of us divers to stand up there and talk about. We&39;re all in this together."