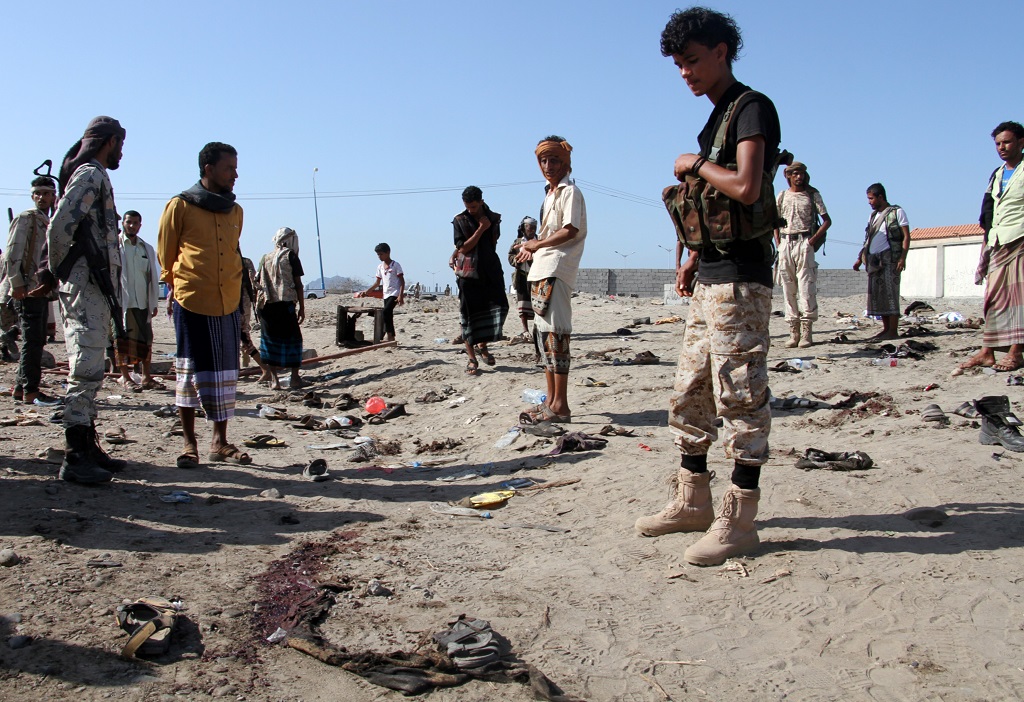 Yemenis gather at al-Sawlaba base in Aden's al-Arish district on December 18, 2016, after a suicide bomber targeted a crowd of soldiers.

ADEN, Yemen - A roadside bomb killed 12 civilians and wounded four in southern Yemen on Monday when a blast targeting a military car hit their vehicle instead, a security source said.

Two other people, including a soldier, were killed Monday in separate attacks also in southern Yemen, where the army has launched an offensive against Al-Qaeda.

The deadliest attack was in Daleh province.

"The bomb was planted on a road in the Qaataba district of Daleh and hit a civilian vehicle instead," killing 12 civilians, said a security source on condition of anonymity as he was not authorised to brief the press.

Along with most of southern Yemen, Daleh is controlled by government forces loyal to President Abedrabbo Mansour Hadi, who is allied with a Saudi-led Arab military alliance in a war against Iran-backed Houthi rebels.

Yemeni special forces trained by government ally the United Arab Emirates and backed by the United States this month launched a major operation in the southern Shabwa province against Yemen's Al-Qaeda in the Arabian Peninsula.

AQAP has exploited years of conflict between the government and the rebels to expand its presence in southern Yemen.

The jihadists are thought to have moved farther south into neighbouring Abyan province.

An attack Monday wounded army General Ahmad al-Shbeili of the 115th brigade and killed his son in the town of Loder in Abyan.

A source in the brigade told AFP Al-Qaeda gunmen were behind the deadly ambush.

And a soldier was killed in the oil-rich Hadramawt province, east of Daleh and Abyan, when masked gunmen opened fire on a residential street, a security source there said.

An Al-Qaeda suicide bomber killed five Yemeni soldiers and wounded 20 others in an attack last week on an army position in Loder.

The World Health Organisation estimates nearly 8,400 civilians have been killed and 47,800 wounded since 2015 when the Saudi-led alliance intervened in Yemen.

The country also faces a deadly cholera outbreak that has claimed nearly 2,000 lives and affected more than half a million people since late April.

The combination of war, disease and blockades imposed on the port and airport have pushed Yemen, long the poorest country in the Arab world, to the brink of famine.