Russian plane broke up 'in the air' 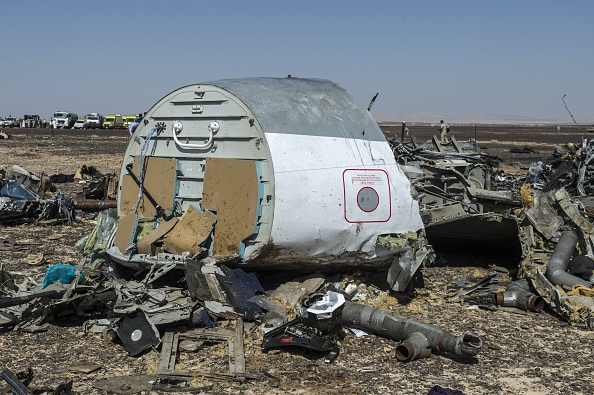 Debris of the A321 Russian airliner lies on the ground a day after the plane crashed in Wadi al-Zolomat, a mountainous area in Egypt's Sinai Peninsula, on November 1, 2015.

WADI Al-ZOLOMAT, Egypt - A Russian plane that crashed in Egypt broke up "in the air" strewing fragments across a wide area, an expert said on Sunday, as investigators probed the disaster that killed all 224 people on board.

President Abdel Fattah al-Sissi urged patience to determine the cause of Saturday&39;s crash, after the Islamic State jihadist group claimed it brought down the A-321 in Egypt&39;s restive Sinai Peninsula.

"The disintegration happened in the air and the fragments are strewn over a large area," said Viktor Sorochenko, a senior official with Russia&39;s Interstate Aviation Committee, quoted by the Russian news agency RIA-Novosti from Cairo.

Sorochenko, who is heading an international panel of experts, said it was "too early to draw conclusions" about what caused the Sharm el-Sheikh to Saint Petersburg flight to go down.

Russian officials say they need to comb through an area of about 16 square kilometres (six square miles) in the Sinai Peninsula.

Investigators have recovered the plane&39;s "black box" flight recorder and the Egyptian government said Sunday its contents were being analysed.

"In such cases, leave it to specialists to determine the cause of the plane crash because it is a subject of an extensive and complicated technical study," Sisi said.

The crash site in the Wadi al-Zolomat area of North Sinai was littered with numerous blackened parts of the plane, as the smell of burnt metal lingered in the air, an AFP correspondent said.

There were no bodies visible but soldiers guarded dozen of bags as well as black, red and orange suitcases of passengers from flight KGL 9268.

Nearby lay a tiny red jacket, probably of a child, underlining the horror of the tragedy that killed 17 children.

Officers involved in search efforts said rescue crews had recovered 168 bodies so far, including that of a girl found eight kilometres (five miles) from the main wreckage.

Flags were flying at half mast in Russia on Sunday and entertainment television programmes were cancelled as part of a national day of mourning for the victims, most of them Russians, ranging in age from 10 months to 77 years.

Cairo said there were 214 Russian and three Ukranian passengers on board, and seven crew members.

Cairo and Moscow have both downplayed the claim from the Islamic State&39;s (IS) branch in Egypt that it brought down the aircraft flown by Kogalymavia airline, operating under the name Metrojet.

The IS affiliate waging an insurgency in the Sinai claimed it brought down the plane in revenge for Russian air strikes against the group in Syria.

But experts rejected the idea.

To reach a plane at that altitude "you would need hard-to-use missiles, so it seems unlikely," said Jean-Paul Troadec, former director of France&39;s BEA aviation investigation agency.

"This requires trained people and equipment that IS does not have, to my knowledge."

Experts said a surface-to-air missile could have struck the aircraft if it had been descending, and that a bomb on board could not yet be ruled out, but technical or human error was more likely.

An Egyptian air traffic control official said the pilot told him in their last exchange that he had radio trouble, but Civil Aviation Minister Mohamed Hossam Kamal said communications had been "normal".

"There was nothing abnormal... and the pilot didn&39;t ask to change the plane&39;s route," he said.

Russia has a dismal air safety record, and while larger carriers have started to upgrade their ageing fleets the crash will likely raise concerns about smaller airlines like Kogalymavia.

Kogalymavia defended the pilot, Valery Nemov, who it said had more than 12,000 hours of flying experience, including 3,860 hours on an Airbus A321.

On Sunday, the Russian transportation watchdog, Rostransnadzor, ordered Kogalymavia to perform a full check on their A-321 planes.

Kogalymavia confirmed the instructions but denied this amounted to a de-facto grounding of the company&39;s remaining fleet of six A321 airliners.