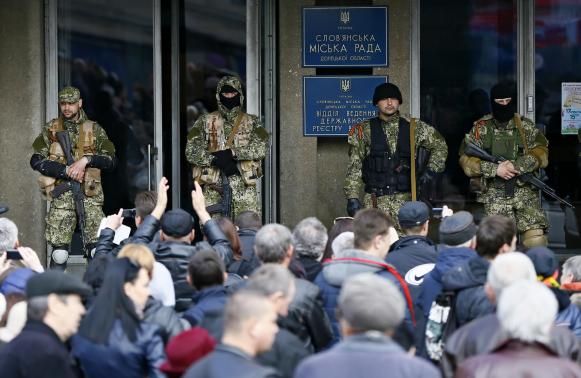 SLAVYANSK, Ukraine - US President Barack Obama urged Russian leader Vladimir Putin in a phone call Monday to press pro-Moscow groups to lay down their arms in Ukraine, as the Kiev government sought UN help to tackle the growing insurgency.

Tensions between the US and Russia were exacerbated by two episodes at the weekend -- a confrontation in the Black Sea in which a Russian warplane "buzzed" a US destroyer and a visit to Kiev by CIA chief John Brennan.

A White House statement said the telephone call came at Russia&39;s request and that Obama accused Moscow of supporting "armed pro-Russian separatists who threaten to undermine and destabilise the government of Ukraine".

Obama told President Putin that all "irregular forces in the country need to lay down their arms".

Putin denied involvement with the pro-Russian insurgents, but an unconvinced European Union expanded its sanctions against officials accused of seeking to break up the ex-Soviet country.

Putin told Obama that Russia was not sponsoring the Kalashnikov-toting separatists who have seized a string of key state buildings in eastern Ukraine, according to the Kremlin&39;s account of the phone call between the two leaders.

He urged Obama to "do everything possible to avoid the use of force and a bloodbath", the Kremlin added.

Ukraine&39;s Western-backed interim President Oleksandr Turchynov meanwhile sought a way out of the escalating crisis by proposing a referendum on greater autonomy for the country&39;s regions and seeking help from the United Nations.

There was no initial response from the UN, and Turchynov&39;s office did not explain what precise help Ukraine was requesting.

Hundreds of people demonstrated in Kiev late on Monday, calling for a tough response against the pro-Russian insurgents and the sacking of Ukraine&39;s Interior Minister Arsen Avakov.

On Sunday the Kiev government had promised a "full-scale" anti-terrorist operation against the separatists, but that has not materialised.

The pro-Kremlin militias who have seized state buildings in coordinated raids across eastern Ukraine only appeared to be gaining confidence while paying little heed to the "full-scale anti-terrorist operation" announced with much fanfare in Kiev.

Protesters armed with rocks and clubs smashed their way inside a police station in Gorlivka -- a coal-mining town straddling a highway between the regional capital Donetsk and the city of Slavyansk to the north that is now effectively under militants&39; control.

The unrestrained crowd whistled and cheered as they ripped away metal shields from the visibly frightened local force before raising the tricolour flag of the self-declared "People&39;s Republic of Donetsk".

Armed militants in Slavyansk -- already in control of the local police station and security service office -- took command of its administration building before asking Putin to send in his troops.

"We ask President Putin to help us," rebel leader Vyacheslav Ponomaryov told a group of reporters.