Shell not welcome in Seattle 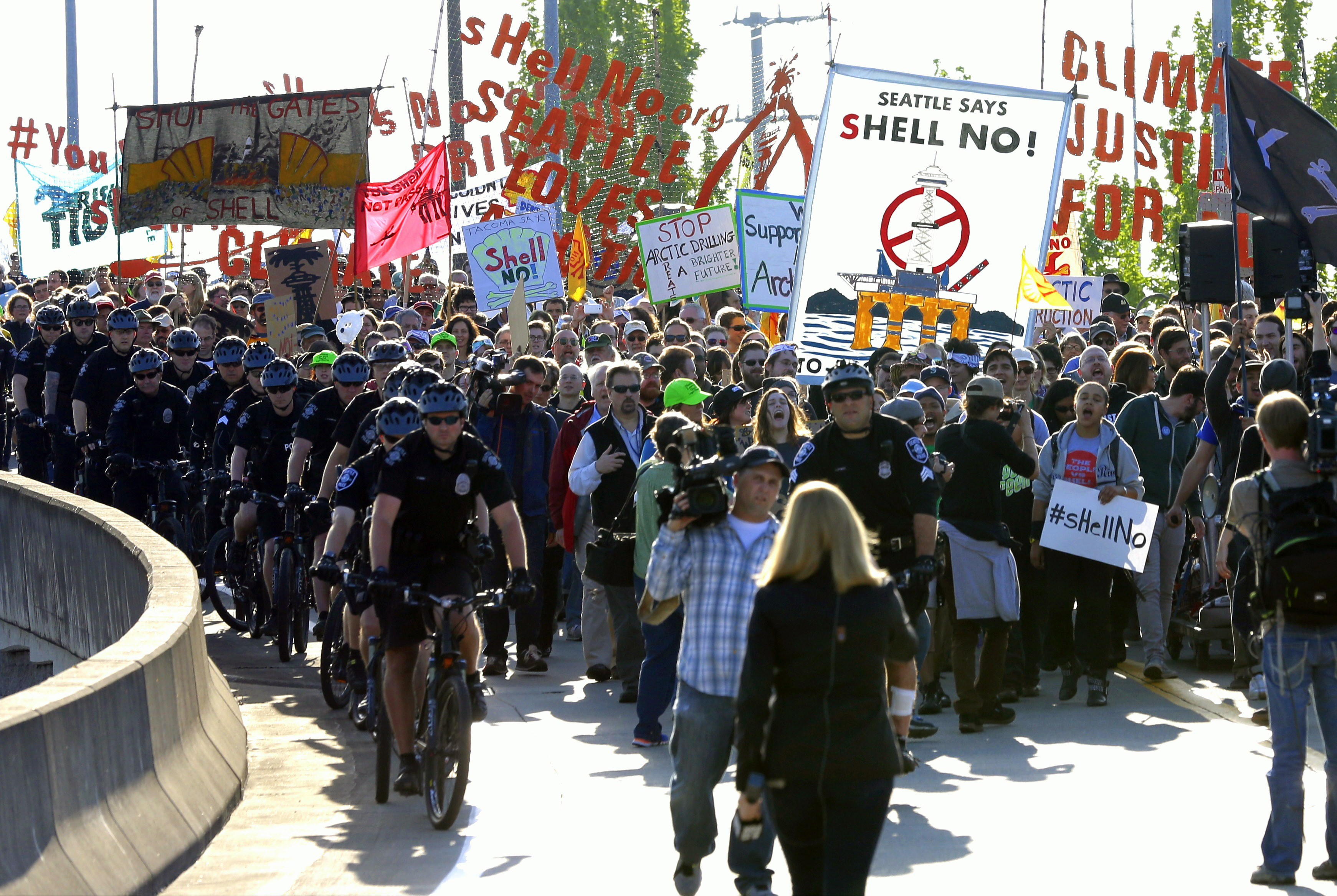 A few hundred protesters blocked port entrances in Seattle Monday 18 May 2015, and the City of Seattle declared that Shell and its maritime host lacked a proper permit.

SEATTLE — Foes of Royal Dutch Shell’s use of a Seattle seaport terminal to prepare for exploratory oil drilling in the Arctic Ocean attacked on two fronts Monday.

A few hundred protesters blocked port entrances and the City of Seattle declared that Shell and its maritime host lacked a proper permit.

Demonstrators say they instead to block terminal access. pic.twitter.com/nLg73sX3IK

The city issued a violation notice, saying use of Terminal 5 by a massive floating drill rig was in violation of the site’s permitted use as a cargo terminal.

The 400-foot (120-meter) Polar Pioneer and its support tug Aiviq must be removed from the terminal or Shell’s host, Foss Maritime, must obtain an appropriate permit, the Seattle Department of Planning and Development said.

The companies can appeal. Possible fines start at $150 per day and can rise to $500 per day.

The notice said the violation must be corrected by June 4.

“It remains our view that the terms agreed upon by Shell, Foss and the Port of Seattle for use of Terminal 5 are valid, and it’s our intention to continue loading-out our drilling rigs in preparation for exploratory drilling offshore Alaska,” Shell spokesman Curtis Smith said.

“Terminal 5 is permitted to tie up ships while they are being loaded and unloaded,” Foss Maritime spokesman Paul Queary said. “That is exactly what Foss is doing there.”

Queary noted that both Foss and the Port of Seattle are appealing an earlier determination by the city that the use of Terminal 5 was not permitted. Monday’s violation notice followed that determination.

Earlier Monday, protesters spent several hours blocking entrances to the terminal where the rig will be loaded before heading to waters off Alaska this summer.

Holding banners and flags, demonstrators marched across a bridge to Terminal 5, temporarily closing the road during Monday morning’s commute.

Our live coverage of today&39;s direct action against Shell at the Port of Seattle: http://t.co/8GK0o8xFqt pic.twitter.com/PgmiARBOCQ

Once at the terminal, they spread out across the entrances and rallied, danced and spoke for several hours before leaving the site in the early afternoon.

Organizers had prepared to engage in civil disobedience to stop work on the drill rig, but Seattle police said Monday afternoon that no one had been arrested and the demonstration remained peaceful.

A few dozen officers followed the march on foot and bicycle and kept watch at the terminal.

The mass demonstration was the latest protest of the Polar Pioneer’s arrival in Seattle. Protesters greeted the rig Thursday, and then hundreds of activists in kayaks and other vessels turned out Saturday for a protest dubbed the “Paddle in Seattle.”

Smith said in an email that the “activities of the day were anticipated and did not stop crews from accomplishing meaningful work in preparation for exploration offshore Alaska this summer.”

There were minimal operations at Terminal 5, “so there’s not much to block,” Port of Seattle spokesman Peter McGraw said.

The activists say they are concerned about the risk of an oil spill in the remote Arctic waters and the effects that tapping new frontiers of oil and gas reserves will have on global warming.

Officials in Alaska have touted the economic benefits that drilling could bring there and to the Pacific Northwest.

On Monday, protesters of all ages sang, rapped and danced at the vehicle gate of Terminal 5. They chanted and held signs saying “Climate Justice For All” and “You Shell Not Pass.”

Lisa Marcus, 58, a musician who participated in Saturday’s protest, turned up with her “Love the planet” sign for another day of activism Monday.

“We’ve got to wake up” to the dangers of human-caused climate change, she said. “Shell is trying to make it worse, and that’s not acceptable.”