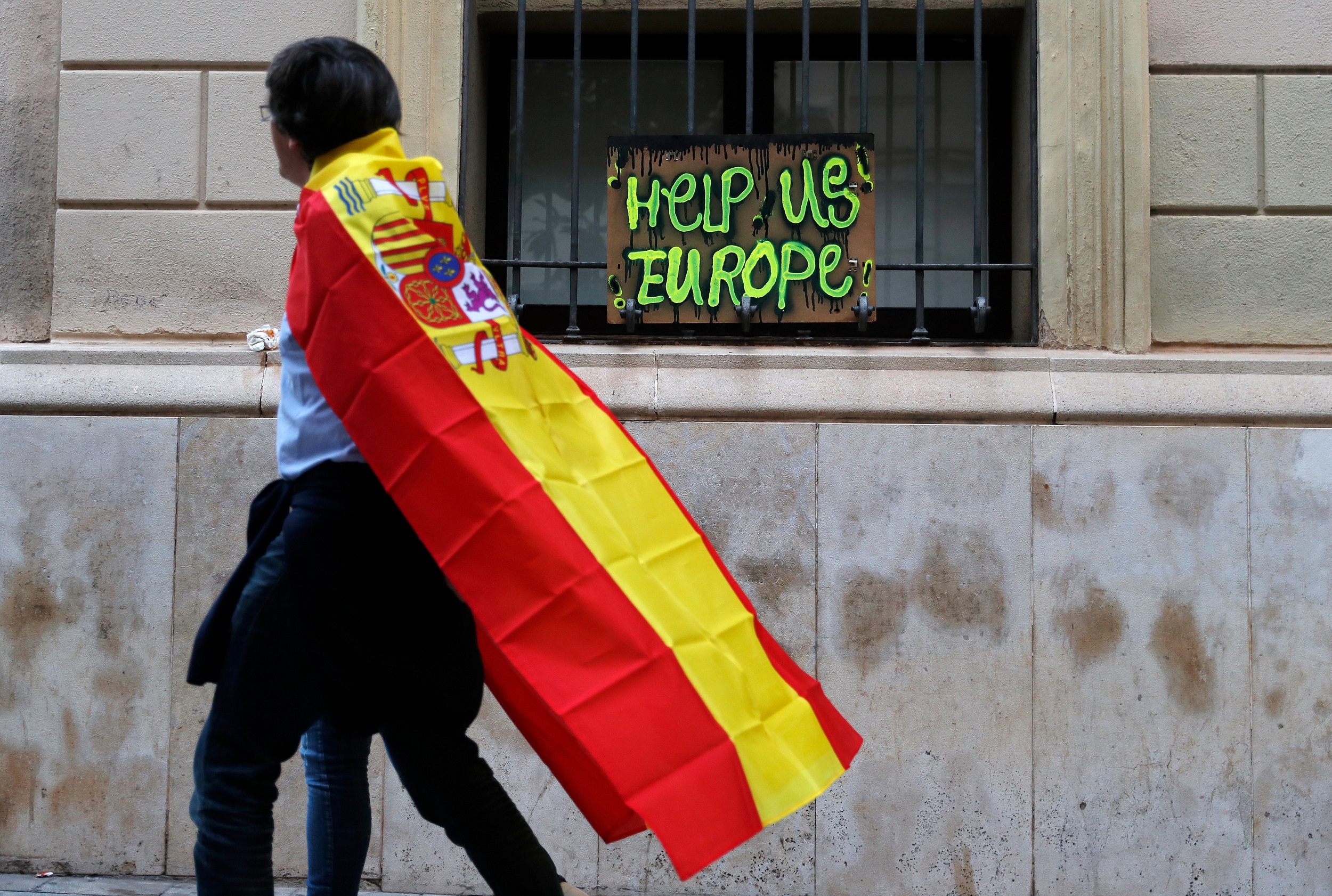 Pro-union supporters walk past a home made appeal for help during a demonstration in a square in Sabadell, Calatonia.

MADRID - Spain braced for more protests on Saturday despite tentative signs that the sides may be seeking to defuse the crisis after Madrid offered a first apology to Catalans injured by police during their outlawed independence vote.

Catalan leaders had threatened to declare independence unilaterally and Spanish Prime Minister Mariano Rajoy vowed to stop them, rejecting calls for mediation in a dispute that has drawn cries of concern even from Barcelona and Real Madrid footballers.

Spain's deepest political crisis in decades has raised fears of further unrest in the northeastern region, a tourist-friendly area of 7.5 million people that accounts for a fifth of Spain's economy.

Opponents of secession have called for demonstrations around Spain and a major rally in Barcelona on Saturday.

Also Saturday, people who support dialogue to end the crisis plan to gather in a bid to pressure mayors nationwide. The anonymous initiative, which spread across social media, seeks to promote talks using the slogan: "Spain is better than its leaders".

"It's the moment to come together to tell (our leaders) that they are incapable and irresponsible," the group's manifesto reads. The gathering will start from around midday.

A "patriotic" march will start around the same time in central Madrid, organised by people who support a united Spain.

Friday saw the first signs the sides may be willing to step back from the brink in a political conflict that risks destabilising Europe.

After days of ill-tempered rhetoric, the central government said it regretted the injuries and suggested Catalonia should hold a regional election to settle the crisis.

Catalan government minister Santi Vila, a close of ally of regional president Carles Puigdemont, meanwhile told broadcaster Rac1 that his side could consider a "ceasefire" in the dispute, to avoid a further crackdown by Madrid.

Businesses and the government kept up economic pressure on Catalonia however, with several big companies announcing moves to shift their legal domiciles to other parts of Spain.

Puigdemont postponed an appearance in the regional parliament at which some leaders were hoping for a declaration of independence, a spokesman said -- gaining time and easing tensions. It was unclear what he planned to say at the session.

"I can do nothing but regret it, apologise on behalf of the officers who intervened," said the government's representative in Catalonia, Enric Millo.

"It would be good to start mending this fracture... through regional elections," he told a news conference.

The court summons raised tensions, but, despite the gravity of the accusations, the court did not issue a custodial order that could have further escalated the dispute.

Spain's Constitutional Court on Thursday ordered the suspension of a session scheduled for Monday in the Catalan parliament at which some leaders have called for an independence declaration.

If Catalonia declares independence, Spain could respond by suspending the region's existing autonomous status and imposing direct rule from Madrid.

On another front, the government in Madrid pushed ahead with a measure to pressure Catalonia economically.

It passed a decree to make it quicker for businesses to shift their legal domiciles away from one region to another.

Energy company Gas Natural and Catalonia's two biggest banks, Sabadell and CaixaBank, said they were shifting their legal headquarters out of Catalonia.

Sources who asked not to be named told AFP that some customers had been withdrawing money from their bank accounts over concerns for the political situation.

With its own language and cultural traditions, demands for independence in Catalonia date back centuries but have surged during recent years of economic crisis.

The Catalan government later on Friday published final results from the referendum vote indicating that 90 percent of voters backed the region breaking away from Spain.

Recent polls have indicated that Catalans are split on independence, though leaders warned the violence during the referendum turned many against the state authorities.

Switzerland said Friday it was "in contact" with both sides in the crisis but stressed that formal mediation could not begin until both camps were ready.

Madrid has said there will be no talks or mediation until the Catalans abandon the independence bid.