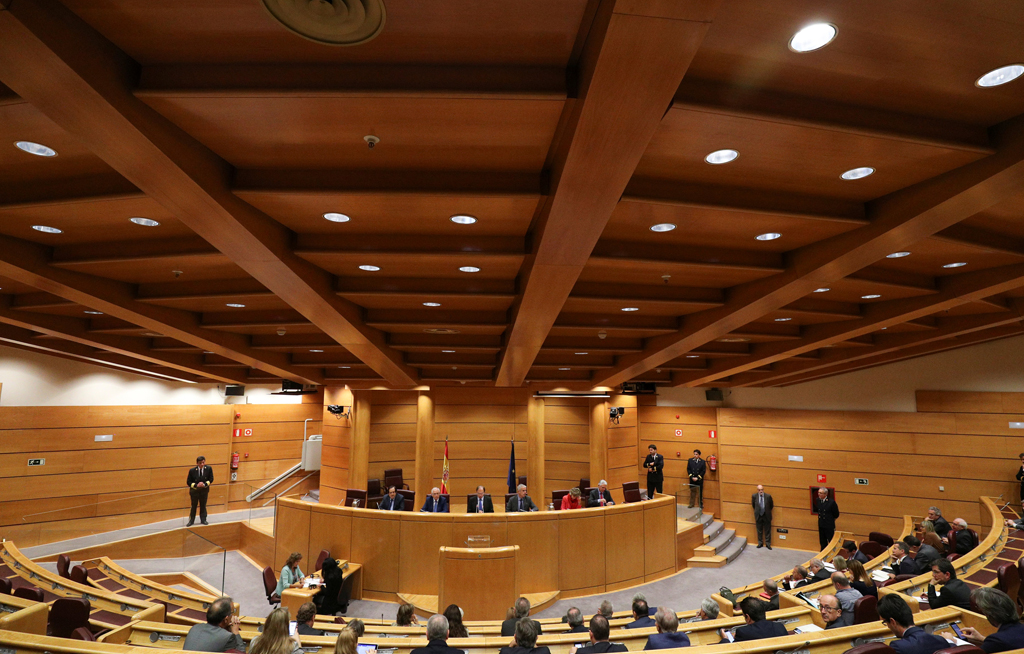 Committe members attend the upper house Senate committe meeting to review the measures of article 155, which if approved, would impose direct rule on Catalonia, revoking the wealthy region's autonomy, at the Senate, in Madrid, Spain, October 24, 2017.

MADRID - Spanish courts are likely to issue a European arrest warrant for former Catalan president Carles Puigdemont after he failed to appear at a Spanish court hearing on Thursday, Spain&39;s top judge said.

Puigdemont&39;s lawyer in Belgium, where he has travelled with four members of his sacked cabinet, said the climate in Spain was "not good" and his client wanted to take "some distance"; but he would cooperate with the courts.

"If they ask, he will cooperate with Spanish and Belgian justice," lawyer Paul Bekaert told Reuters.

Prime Minister Mariano Rajoy sacked Puigdemont and his government on Friday, hours after the Catalan parliament made a unilateral declaration of independence - a vote boycotted by the opposition and declared illegal by Spanish courts.

Puigdemont said on Wednesday he would ignore a court order to return to Spain to answer charges of rebellion, sedition and misuse of public funds relating to the region&39;s secessionist push. He did not turn up at a High Court hearing on Thursday.

"When someone doesn&39;t appear after being cited by a judge to testify, in Spain or any other EU country, normally an arrest warrant is issued," said Supreme Court President Carlos Lesmes who is also the head of the General Council of the Judiciary, Spain&39;s top judicial body.

An arrest warrant would make it virtually impossible for Puigdemont to stand in a snap election in the wealthy region called by the Spanish government for 21 December.

The decision will be taken by a High Court judge following the testimony of the remaining nine members of Puigdemont&39;s sacked cabinet, including former vice-president Oriol Junqueras.

Five senior regional lawmakers and the speaker of the Catalan parliament, Carme Forcadell, were also summoned by the Supreme Court, which handles the cases of people who enjoy parliamentary immunity.

The Supreme Court agreed on Thursday to give one more week to Forcadell and the Catalan lawmakers to prepare their defence and a new hearing will take place on 9 November.

By 1015 GMT, five members of the dismissed Catalan cabinet had already testified before the High Court judge who is due to decide at this first hearing whether she starts a comprehensive investigation that could take several years and potentially lead to a trial.

She will also determine whether those called to testify should go to jail pending the investigation. She might also grant them conditional bail or order them to surrender their passports.

Puigdemont said on Tuesday he would go back to Spain only if given unspecified "guarantees" by the Spanish government.

Following a tumultuous month, attention is gradually turning to the December vote.

Cracks have appeared within the pro-independence coalition of centre-right and far-left parties as well as inside Puigdemont&39;s own PdeCat (Democratic Catalan Party) where some of his allies are now pushing for a negotiated solution with the central government.

The struggle has also divided Catalonia itself and caused deep resentment across the rest of Spain, although separatist sentiment persists in the Basque Country and some other areas.

Two recent opinion polls showed support for independence may have started to wane.

But an official regional survey published on Tuesday showed some 48.7 percent of Catalans believe the region should be independent, up from 41.1 pct in June and the highest since December 2014.