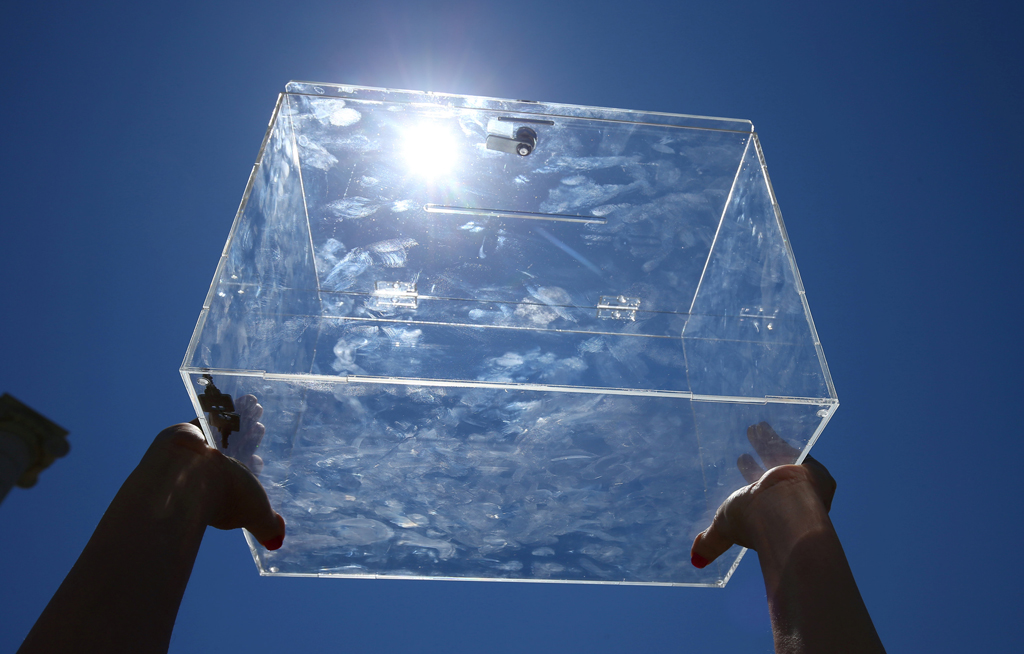 FILE PHOTO - A volunteer shows a ballot box after a pro-independence rally in Barcelona, Spain June 11, 2017.

MADRID - Spain's central government launched its latest salvo against Catalonia on Friday, tightening control over regional spending and brushing aside a last-ditch separatist demand for dialogue to allow a banned referendum.

"The rule of law works. Maybe some have not noticed, and it would be best if they noticed, Prime Minister Mariano Rajoy told a meeting of his conservative Popular Party in Barcelona.

"The state will keep acting, because that is its duty," he added to applause from the audience, which gave him a standing ovation at the end of his speech.

State authorities have piled pressure on Catalonia, threatening to arrest mayors if they facilitate the referendum and ordering police to seize any item that could be used in the vote in a region sharply divided over whether it wants independence.

Madrid went a step further Friday by tightening control over Catalonia's spending to prevent the region from using money to organise the referendum.

Budget Minister Cristobal Montoro said Spain's central government would take over the payments of essential services and public workers' salaries in the region to make sure the cash went just to them.

But separatists have reacted with defiance.

On Thursday evening, Catalan President Carles Puigdemont and other regional players launched their campaign for the referendum in front of a crowd of thousands of cheering supporters in the coastal city of Tarragona, ignoring warnings that the event was "illegal."

In an open letter distributed to domestic and foreign media on Friday, Puigdemont and other leaders including Barcelona Mayor Ada Colau denounced "unprecedented repression" by Madrid.

They also asked Rajoy and the Spanish king for a last-ditch dialogue, but were promptly rebuked.

"It's ironic coming from those who have refused dialogue save for a very specific issue -- the only one they care about -- the independence referendum," government spokesman Inigo Mendez de Vigo told reporters.

The latest tit-for-tat tops weeks of mounting tensions as Catalan leaders go ahead with referendum preparations despite Madrid's ban and a court ruling that deems it illegal.

A poll in July commissioned by the regional government found that 49.4 percent of Catalans were against independence while 41.1 percent supported it. More than 70 percent, though, wanted a referendum to settle the matter.

If they win, the separatists vow to declare independence within days for the wealthy northeastern region of Spain, home to around 7.5 million people.

Some 750 mayors have pledged to hold the referendum, but they head up mostly small municipalities.

Among the most populated cities, five out of 10 will not get involved, and question marks remain over the biggest of them all -- Barcelona.

Colau said Thursday that people in Barcelona would be able to vote "without putting institutions or public workers at risk," but she gave no details as to how this would work.

Rajoy urged the "threatened mayors" who have not agreed to help stage the referendum to "remain calm".

"We are with you, we are many, we are the majority, and this is a strong democracy that will not accept challenges like the one we have on our table," he said.

Catalonia, which accounts for about one-fifth of Spain's economic output, already has significant powers over matters such as education and healthcare.

But Spain's economic worries, coupled with a perception that Catalonia pays more in taxes than it receives in investments and transfers from Madrid, have helped push the cause of secession.

The pro-separatist camp argues that a referendum represents their right to self-determination.

"What we are doing is exercising the right to vote... that forms part of a basic democratic exercise," Catalan Vice-President Oriol Junqueras told Spanish radio on Friday.

The "repression" they denounce includes legal proceedings against Puigdemont and other Catalan officials including members of a newly-created electoral board to oversee the vote.