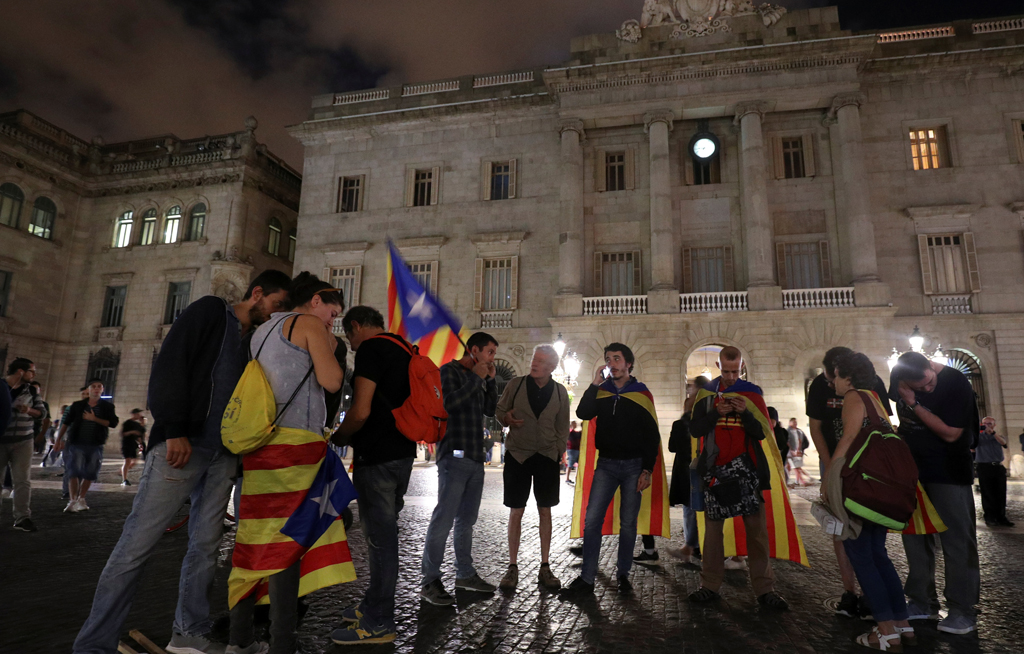 MADRID - It was a king's speech that left many Catalans dismayed -- no mention of those hurt in police violence when they tried to vote in a banned weekend independence referendum, no mention of dialogue.

Instead, Spain's King Felipe VI sided squarely with Prime Minister Mariano Rajoy's government on Tuesday evening as he addressed the nation over an escalating crisis between Catalan separatist leaders and Madrid.

And with his camp clearly chosen, analysts said the head of state paved the way for Madrid to apply drastic measures to slow down Catalonia's independence drive -- risking his very monarchy in the process.

Felipe VI came down hard on Catalan authorities, which organised Sunday's referendum on independence even after they had been told by Madrid they could not go ahead with a vote deemed unconstitutional.

Accusing them of "disloyalty" and being "completely on the margins of law and democracy", the king said that state had to "ensure constitutional order".

Ana Romero, a journalist specialising in Spain's royal family, said that with this position, the 49-year-old sovereign made a risky bet.

"What will happen at the end of all this will determine the success or failure of his reign," she told AFP.

If, despite Madrid's best efforts, Catalonia becomes independent -- still a very hypothetical step -- this could lead to a domino effect in Spain with other regions demanding to split from the country.

On top of that is a rise in anti-monarchy sentiments and the emergence of republican party Podemos.

"He is defending his house, his crown, the future of his daughter (Princess Leonor)."

Abel Hernandez, another journalist and expert in the monarchy, said he "bet everything on one card".

"If this ends badly for him, it's over."

Several analysts drew a parallel with the stern intervention of Felipe's father Juan Carlos on the night of February 23, 1981 when he appeared on television, dressed in military garb, and staved off an attempted coup.

That speech won the then king legitimacy among Spaniards still unsure about a monarch who was installed by dictator Francisco Franco before he died in 1975.

But at that time, all Spaniards were on one side -- that of democracy -- Romero said.

The Catalan separatist crisis, though, "is much more complicated" as it divides Catalans among themselves, and with the rest of Spain, said Romero.

As such, the king may have added fuel to fire.

By taking a hard stance against pro-independence Catalans, he alienated many in the 7.5-million-strong region in "a very firm and very hard" manner, she said.

Jose Apezarena, Felipe VI's biographer, pointed out that "the word 'dialogue' was absent from the speech".

He did not talk about police either, under fire for having brutally repressed the vote, in some cases using batons and rubber bullets to stop people from casting their ballot.

At least 90 people were injured, according to regional authorities, which were also absent from his speech.

"You would have expected a conciliatory position," said Oriol Beltran, a Catalan professor of anthropology.

Jordi Turull, spokesman for the Catalan government, accused the monarchy of "adding fuel to the fire".

"It was scary, an all-round mistake."

For analysts, the uncompromising speech paves the way for more radical measures.

"With this speech, the king opens the door to all measures included in the Constitution to restore constitutional order," said Fermin Urbiola, the author of books on the Spanish monarchy and other European royal families.

One of these could be to invoke article 155 of the Constitution, which allows the state to take powers away from a semi-autonomous region of Spain if "it doesn't fulfil the duties imposed by the Constitution or other laws".

"There is no going back" after the speech, said Hernandez.