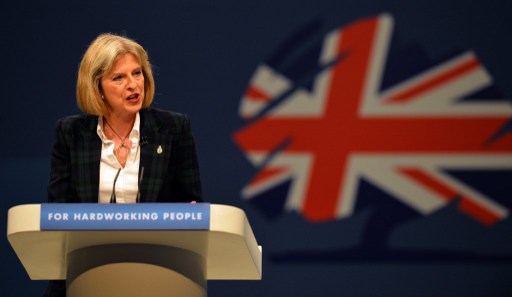 Britain's interior minister Theresa May. Judges in Britain will be given the power to jail modern-day slave drivers for life, the government has said.

LONDON - Divisions in Prime Minister Theresa May&39;s Cabinet generated confusion over Brexit Friday after a series of mixed messages on how and when Britain will leave the European Union.

Following an interview with Sky News in which he said that Britain planned to begin formal Brexit talks early next year, Foreign Secretary Boris Johnson was quickly put in his place by May&39;s office on Thursday.

"The government&39;s position has not changed -- we will not trigger Article 50 before the end of 2016," a Downing Street spokesman said, referring to the EU treaty article outlining how a member state leaves.

May has deliberately kept the public message vague, saying only that "Brexit means Brexit", she is aiming for the "best deal" and would not provide any further commentary before Britain triggers the exit procedure.

But it is clear that there are differences of opinion in her government between those who favour "hard" Brexit -- quickly severing all links with EU institutions -- and "soft" Brexit -- which could retain access to the single market.

"Day after day after day, the differences and the nuances of difference between those who are at the top of the party and different ministers, and the prime minister, have become very, very clear," London School of Economics professor Tony Travers said.

The Spectator magazine&39;s Tom Goodenough wrote: "By keeping shtum (quiet) about Brexit and pledging that there will be &39;no running commentary&39; on Article 50, the prime minister may have saved herself the trouble of worrying about having to go back on her words.

"But she has also created a Brexit vacuum. And it&39;s no surprise that the likes of Boris are trying to fill the gap," he said.

Former London mayor Johnson, once seen as a top contender to be prime minister, had already ruffled feathers in Downing Street when he appeared in a video by eurosceptic pressure group "Change Britain".

"Now more than ever, we need to show the British people that as politicians we are listening to what they have to say," he said in the video message.

"Brexit means Brexit and that means delivering on their instructions and restoring UK control over our laws, borders, money and trade," he said.

Brexit minister David Davis was also rebuked this month for saying it was "very improbable" Britain would stay in the single market.

"He&39;s setting out his view that it&39;s improbable," May&39;s spokeswoman said afterwards, adding that the premier "recognises that people have their differing views".

The three ministers with the biggest role to play in getting Britain out of the EU -- Johnson, Davis and international trade minister Liam Fox -- all favour a "hard" Brexit.

This could see Britain leaving the single market and operate on World Trade Organisation rules internationally, while also imposing strict curbs on immigration from the EU.

The trio all campaigned for Britain to leave the EU in June&39;s referendum and are regularly referred by British tabloids as the "Three Brexiteers".

In his interview on Thursday, Johnson dismissed as "baloney" the notion that Britain would have to continue to allow free movement of people within the EU if it wanted access to the single market.

This is despite the insistence of European leaders that the two must go hand-in-hand.

"The two things have nothing to do with each other. We should go for a jumbo free trade deal and take back control of our immigration policy," Johnson said.

On the other side, finance minister Philip Hammond is among those reportedly backing a less hardline approach that would retain more ties with the EU, particularly for the strategically crucial City of London financial hub.

The Financial Times said the "turf war" in the government was unsettling business leaders.

The newspaper added that, when asked who was in charge of Brexit, Hammond told business chiefs in a recent meeting that it was "all very difficult at the moment".