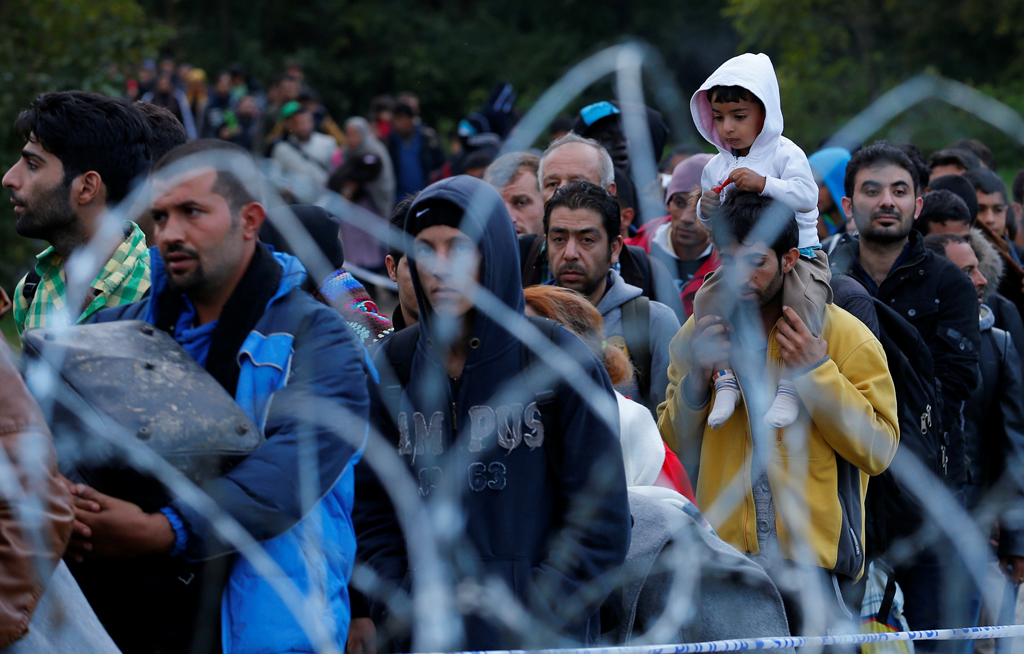 BRUSSELS – New legal action by the EU against eastern member states for refusing to take their share of refugees shows how the worst migration crisis since World War II still divides the continent.

The numbers tell a deeper story. The basic facts are stark: Since 2014, more than 1.6 million people have arrived by sea while 13,500 have died on the way.

The numbers also give answers to the important human questions: Where are these people coming from, where are they going, how many have died, and how many will be allowed to stay?

The migration crisis has no official starting point but statistics from the International Organisation of Migration (IOM) offer some chronological yardsticks.

But it was in 2015 that the situation took on dizzying proportions. The IOM registered 1,011,712 arrivals by sea in Europe, including 853,650 on Greek shores, with the peak in arrivals hit in October, and 153,842 on Italy's coastline. The increase was mainly a result of the worsening conflict in Syria alongside deteriorating conditions in Syrian refugee camps in Turkey, Lebanon and Jordan.

Most came to Greece across the Aegean Sea from Turkey.

While the EU struggled to forge a collective response and help Greece cope with the influx, most of the migrants trekked along the so-called Balkan route toward wealthy northern European countries like Germany and Sweden.
The arrivals on the Italian coast in 2015 came on the central Mediterranean route, mainly from sub-Saharan African countries: 39,162 Eritreans, 22,237 Nigerians, 12,433 Somalis and 8,932 Sudanese.

There was a sharp drop in migrant arrivals in Greece in 2016, with the IOM registering a total of 363,401 arrivals on Greek and Italian shores, about one-third as many as the previous year. In Greece, 173,614 arrived by sea, a drop of nearly 80 percent, reflecting the combined impact of a controversial migrant deal between Turkey and the EU and the nearly total closure of the Balkans route.

The trend is continuing in 2017, with just 7,699 arrivals registered by the IOM in Greece during the first five months of the year.

But the lull in Aegean crossings is tenuous as Turkey is increasingly at odds with the EU and has threatened to scrap the migrant deal over European criticism of its crackdown after an attempted coup against President Recep Tayyip Erdogan. Italy meanwhile has seen arrivals continue apace, hitting a new record in 2016 with 181,436.

Those arrivals were mainly Nigerians (20.7 percent), Eritreans (11.4 percent) and Guineans (7.4 percent), according to the IOM. Most are not considered potential refugees, but economic migrants who must be returned to their countries of origin.
So far this year, figures confirm that the central Mediterranean route has once again become, by far, the main channel to Europe.

Italy has registered more than 65,000 arrivals since January, up nearly 20 percent from the same period last year.

Not just the EU

While the migration crisis is often portrayed as a crisis facing the EU's roughly 510 million people, smaller countries outside the region have received a far higher proportion of arrivals. Turkey hosts 3.2 million refugees, Lebanon shelters more than one million and Jordan is home to 660,000 according to the UN High Commissioner for Refugees. The vast majority are Syrians.

Behind the migrant influx are human dramas.

The EU police agency Europol said in January 2015 that more than 10,000 unaccompanied migrant children had disappeared in Europe during the preceding 18 to 24 months, adding that many may have been victims of sexual abuse and other assaults by organised crime networks.

The mass arrival of migrants has shaken the EU, creating tension between its legal obligation to help asylum seekers and the anti-immigration sentiment that has risen in a number of countries, particularly in the wake of a series of terror attacks on the continent.
EU countries had a record number of asylum applications in 2015, with nearly 1.26 million applying for the first time, after 562,000 in 2014, according to Euro stat. These amount to the total requests in member states, which can include people who applied in several countries.

In 2016, the level remained high at 1.2 million first-time requests, filed mainly by Syrians, Afghans and Iraqis, as was the case the year before. A number of the requests were filed in 2015 but counted by Euro stat only the following year. Many applicants are part of the flow over the Mediterranean, but not all. There are for example 28,925 Albanians and 23,015 Russians who sought asylum in EU countries.

In proportion to the population of each country, 2016 statistics from Euro stat show that the highest number of asylum requests were recorded in Germany, ahead of Greece, Austria, Malta and Luxembourg.

Some 55 percent of the total in 2016 were listed as refugees, while 37 percent were placed in the category of "subsidiary protection," or those who fall short of the criteria for refugee status but who are in danger in their home countries. Another eight percent qualified for "authorisation to stay for humanitarian reasons".

#HRC35: UK "remains committed to the protection and promotion of the #HumanRights of #Migrants" READ IN FULL: https://t.co/3NZR7qIdhm pic.twitter.com/hMOxoIa9t9

The rate of positive responses to asylum requests for one of the three statuses stood at 61 percent on first request, and 17 percent on appeal, but there were wide disparities depending on the nationality of the applicant. The rates rose to 98.1 percent on average for Syrians, 92.5 percent for Eritreans and 63.5 percent for Iraqis.

Asylum seekers whose applications are rejected are supposed to be sent back to their country of origin, as are new arrivals who do not ask for asylum and are considered economic migrants. About 305,365 people last year received an administrative or judicial order to return to their home country, up from 286,725 in 2015 and 251,986 in 2014, according to Frontex.

And 176,223 people were effectively deported in 2016, including 79,608 via a forced departure, Frontex said. Topping the list for forced departures were Albanians at 19,482, Moroccans at 7,506 and Kosovars at 4,916. Ukrainians, Iraqis and Indians topped the category of people who chose to leave voluntarily.

Faced with the extraordinarily high number of arrivals in Italy and Greece, the EU agreed in September 2015 to make a temporary exception to the requirement that the country where migrants first land must process asylum requests. The EU then decided to distribute 160,000 Syrians and others in Italy and Greece to other countries in the bloc over two years.

But the relocation plan that was intended to embody EU solidarity ended up exposing divisions among member states, which have either dragged their feet in accepting their share or rejected taking any. The European Commission launched legal action last Wednesday against Hungary and Poland for refusing to take any migrants and against the Czech Republic for effectively dropping out of the plan. The move starts a long process that could result in fines.

Meanwhile, most of the migrants continue their route north to the wealthier countries, if they can.

The plan has been hit with both logistical problems and reluctance from asylum seekers to travel to assigned countries they fear will not offer them much of a future, particularly in eastern Europe. As a result of all these obstacles, just over 20,000 have been relocated three months before the deadline.