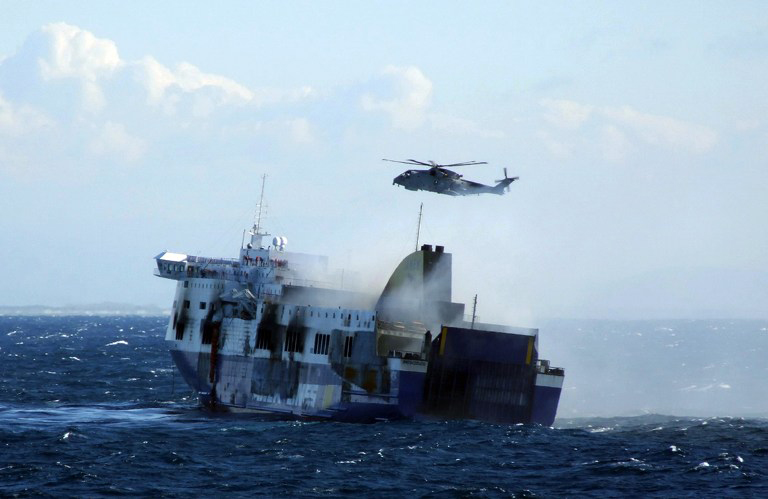 A photo grab taken from a video made available by the Marina Militare Italiana on December 29, 2014, shows the ongoing rescuing operation of passengers by helicopter from the burned ferry "Norman Atlantic" adrift in the Adriatic Sea off Albania.

BRINDISI, Italy - Two Albanian seamen were among 13 people confirmed killed in a ferry disaster in the Adriatic Sea on Tuesday, as officials warned the discovery of stowaways on board meant the true death toll could be far higher.
Greek and Italian authorities were still unable to say with any certainty how many paying passengers were on board the Norman Atlantic when it burst into flames in stormy seas near the island of Corfu on Sunday.
And Giuseppe Volpe, the prosecutor in charge of a criminal probe into the disaster, said "it is likely that we will find other victims in the wreckage" after illegal migrants were also found among the survivors. Three have so far been identified -- two Afghans and a Syrian, who have requested political asylum -- but more are expected to have hidden inside trucks parked on the deck where the fire started.
There were also fears some passengers may have suffocated or been burnt to death in their cabins.
The Italian coastguard confirmed the body of an 11th dead passenger had been recovered on Tuesday.
The disaster also claimed the lives of two Albanian seamen, who died from injuries caused when a cable linking their tugboat to the ferry snapped.
Nearly 40 passengers listed as having been on the Italian-owned ferry were still unaccounted for after a mammoth 34-hour rescue operation, but it was unclear whether this was because they were dead or down to errors in the ship&39;s manifest.
Greek survivor Urania Thireou offered a possible explanation. "At the start, there were people who got into the biggest lifeboat," she told AFP at a hotel in the Italian port city of Brindisi. "They got it into the water but we were told afterwards that they were not rescued."
International rescue efforts were scaled down on Tuesday despite the uncertainty, with the Italian navy&39;s San Giorgio amphibious landing vessel returning to port in the early evening with around 200 survivors on board.
Missing passengers
The Norman Atlantic, empty of passengers after its captain was last to leave the vessel, will now be towed to the Italian port of Brindisi, around 75km from where it caught fire.
Officially, 427 people, including 56 crew members, were rescued from the flames in an operation described as unprecedented by Italian authorities, well short of the revised total of 475 passengers and crew on board the ship.
The ship&39;s Italian owner, ANEK and its Italian captain all face possible manslaughter charges arising from Volpe&39;s investigation. Greece also announced its own probe on Tuesday.
Passengers&39; accounts of being evacuated from the ferry after a terrifying ordeal paint the Norman Atlantic&39;s crew as being completely unprepared for an emergency.
Many have told how it was either thick smoke or other passengers who woke those sleeping, not the crew or alarms, and almost all have said they received no instructions from staff about what to do.
Teodora Doulis, a Greek woman whose husband Giorgios died in the disaster, was among a number of passengers who described the car deck -- thought to have been where the fire started -- as being covered with fuel.
"It stank of petrol. The ship should never have left port in that condition," she said.
Without leadership from the crew, the intensity of the fire, which made metal surfaces so hot that shoes were melting, led to a panic that exposed the worst side of human instinct, according to survivors.
Ute Kilger, a passenger from Munich, Germany, described how she saw a middle-aged man barge past women, children and the elderly to ensure he was winched to safety before them.
"He just went and sat in the basket, which was clearly designed for children. I didn&39;t know whether to laugh or cry," the 45-year-old lawyer told Italian media.
&39;Up to the law&39;
Two key questions for investigators will be why the fire gained such force so quickly and why it was not contained in the area where it started.
"It is up to the law to shed light on the causes of the accident," Italian Prime Minister Matteo Renzi said during a brief visit to Albania on Tuesday.
The ship&39;s owner, Italian company Visemar di Navigazione, has acknowledged that a December 19 safety inspection highlighted a problem with at least one fire door but insists it was fixed before the vessel set sail.
According to Paris MoU, a multinational body that oversees maritime safety standards, the Greek inspectors highlighted problems with more than one fire door as well as the functioning of some water-tight doors, emergency lighting and the availability of life-saving equipment.
The deficiencies were all registered as fixed by the end of the day when the inspection took place. But Richard Schiferli, Paris MoU&39;s secretary-general, told AFP it was unclear whether all the problems had actually been dealt with satisfactorily.