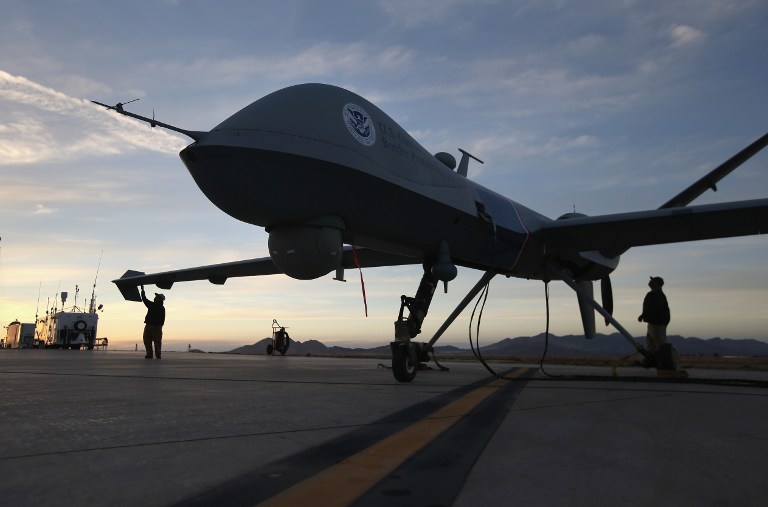 Maintenance personnel check a Predator drone operated by U.S. Office of Air and Marine (OAM), before its surveillance flight near the Mexican border on March 7, 2013 from Fort Huachuca in Sierra Vista, Arizona.

ADEN - A US raid in Yemen at dawn on Sunday killed 30 suspected al-Qaeda militants, including three prominent figures, and 10 civilians, a provincial official said.

Seven women and three children were among those killed in the raid on Yakla district in the central province of Baida, said the official, who did not want to be named, and tribal sources.

Earlier, they said the houses of three tribal chiefs linked to al-Qaeda were targeted, adding that a number of civilians were also killed.

But the provincial official said Apache helicopters targeted also a school, mosque and a medical facility used by al-Qaeda militants.

"There are casualties among the civilians that were in the targeted houses," said one source.

The tribal chiefs were known to be linked to Al-Qaeda, the sources said.

The Zahab brothers had two other Al-Qaeda brothers who were killed in the past by drone strikes.

The United States, which considers the extremist group's Yemen-based franchise, al-Qaeda in the Arabian Peninsula (AQAP), to be its most dangerous, is the only force operating drones over Yemen.

But it only sporadically reports on a long-running bombing campaign against AQAP.

On January 14, the Pentagon announced the killing a senior Al-Qaeda operative in Baida the week before in an air strike.

Al-Qaeda and the Islamic State jihadist group have exploited a power vacuum created by the two-year-old conflict in Yemen between the government and Shiite Huthi rebels, especially in the country's south and southeast.

On 14 January, the Pentagon announced the killing of  a senior Al-Qaeda operative in Baida a week earlier in an air strike.

Al-Qaeda and the Islamic State jihadist group have exploited a power vacuum created by the two-year-old conflict in Yemen between the government and Shiite Huthi rebels, especially in the south and southeast.