Sweden expects to expel up to 80,000 asylum seekers 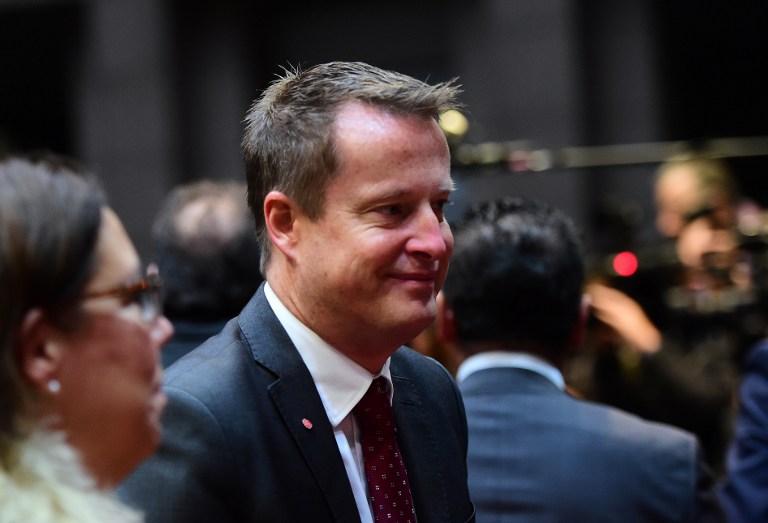 Sweden's Interior Minister Anders Ygeman arrives for an extraordinary Justice and Home Affairs Council following the attacks in Paris, at the European Council in Brussels, on November 20, 2015.

STOCKHOLM - Sweden said it expects to expel up to 80,000 migrants whose asylum requests will likely be rejected, as another 24 people including children drowned off Greece Thursday in the latest tragedy in the Mediterranean.

As the continent grapples with efforts to stem a record flow of migrants, Swedish Interior Minister Anders Ygeman said the mass expulsions of people who arrived in the Scandinavian country last year would require the use of specially chartered aircraft.

The deportations would be staggered over several years, Ygeman said.

REFUGEE CRISIS: Sweden plans to expel up to 80,000 asylum-seekers, according to Interior Minister - @AFP https://t.co/ci520DAseJ

The country of 9.8 million is among the European Union states with the highest proportion of refugees per capita.

Of the 58,800 asylum requests handled by Swedish migration authorities last year, 55 percent were accepted. Many of those requests were however submitted in 2014, before the large migrant flow began.

Ygeman said he used the 55 percent figure to estimate that around half of the 163,000 asylum requests received in 2015 would likely be rejected.

Migration Minister Morgan Johansson said authorities faced a difficult task in deporting such a large number of migrants, but insisted the rejected applicants would have to return home.

"Otherwise we would basically have free immigration and we can&39;t manage that," he told news agency TT.

However, 7,590 people who had their asylum applications rejected last year went underground, and for the period 2010-2015 their number totalled 40,345, according to the migration agency.

More than one million people travelled to Europe last year -- the majority of them refugees fleeing conflict in Syria, Iraq and Afghanistan -- in the continent&39;s worst migration crisis since World War II.

Most cross by boat from Turkey to Greece and the United Nations said Thursday more than 50,000 people have turned up on the EU member&39;s beaches so far this year, while 200 people died making the dangerous journey.

On Thursday, the bodies of 24 migrants, including 10 children, were discovered off the Greek island of Samos after their boat capsized and 11 others were still missing, the coastguard said, a day after seven other bodies were found near the island of Kos.

With the influx showing little sign of abating, many countries -- including Austria, Germany, Denmark, Sweden and France -- have tightened asylum rules in a bid to discourage new arrivals.

Reflecting the mounting tensions, Brussels on Wednesday blasted Greece&39;s handling of the crisis and warned it could face border controls with the EU&39;s passport-free Schengen zone if it does not protect the bloc&39;s frontiers.

Athens is worried its border with Macedonia will be closed, leaving refugees trapped in the country.

An interior ministry official said that was because 600 people were queuing at Macedonia&39;s northern border to cross into Serbia.

Several hours later the refugees were allowed on their way and the situation returned to normal. Some 3,000 people were on Thursday waiting at the Macedonian border on the Greek side, police there said.

Greece is not the only country under fire -- Denmark has faced heavy criticism after lawmakers passed a bill this week allowing authorities to seize valuables from refugees in a bid to deter new arrivals.

Some have likened the move to the Nazis&39; confiscation of gold from Jews during the Holocaust, with Human Rights Watch denouncing the bill as "despicable".

Neighbouring Sweden has seen the number of new migrants entering the country plunge since it brought in systematic photo ID checks on travellers on January 4.

Concerns have grown over conditions in Sweden&39;s overcrowded asylum facilities, however, and officials have called for greater security after an employee at a refugee centre for unaccompanied youths was stabbed to death earlier this week.

A 15-year-old male allegedly attacked the 22-year-old employee, Alexandra Mezher, at the centre in Molndal on Sweden&39;s west coast.

Her death has led to questions about conditions inside some centres, with too few adults and employees to care for the children, many traumatised by war.