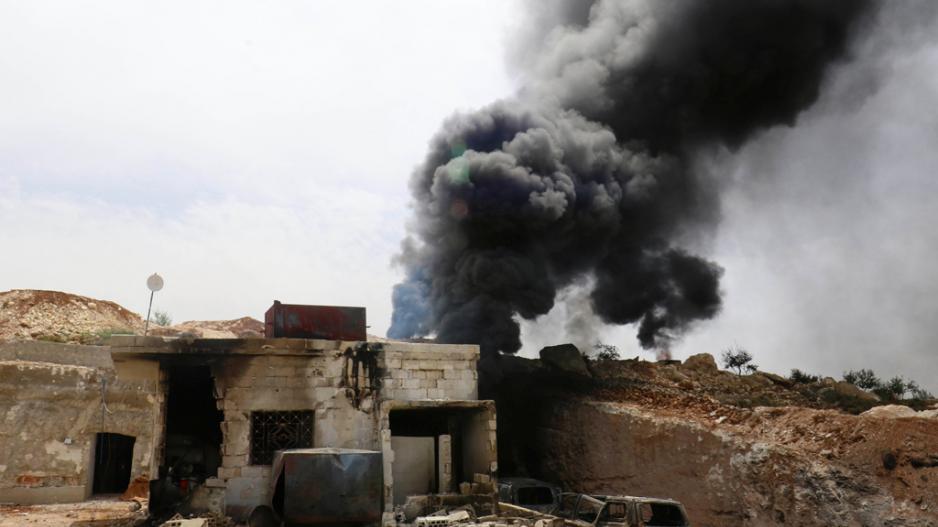 Smoke rises from an emergency service point after an airstrike at the rebel-held village of Maar Zita in Idlib province, Syria April 27, 2017.

The Israeli military later said it shot down "a target" over the occupied Golan Heights neighbouring Syria, although it was unclear whether the two incidents were linked.

Israel has carried out multiple air strikes in Syria since the country's civil war erupted in 2011, most of which it has said targeted arms convoys or warehouses of its Lebanese arch-foe Hezbollah, which is a key supporter of the Syrian regime.

In line with its usual practice, Israel's military declined to comment on the airport blast.

But Israeli Intelligence Minister Yisrael Katz said it was consistent with his government's policy to prevent arms transfers to Hezbollah, while stopping short of confirming his country was behind any attack.

The source did not specify whether the military position belonged to the Syrian army or one its allies.

Earlier, Hezbollah said the blast was "probably" the result of an Israeli air strike.

The militia's Al-Manar television said the raid hit a warehouse and fuel tanks, also without specifying whether they were its own or belonged to the Syrian army or another of its allies.

The Syrian Observatory for Human Rights, a Britain-based monitoring group, said the warehouse was largely empty and "probably" Hezbollah's.

A resident of the Dawwar al-Baytara neighbourhood in the southeast of the capital, who lives in a tower block that looks towards the airport area, said he had seen an immense fireball.

The Kremlin called for restraint and Russia's foreign ministry condemned the attack.

"We continue to consider that all countries need to refrain from any kind of actions that lead to an increase in tension in this already restive region and call for respect for the sovereignty of Syria," said Kremlin spokesman Dmitry Peskov.

Peskov did not confirm if Israel had warned Moscow of the strike, saying only their defence ministries "are in constant dialogue".

Foreign ministry spokeswoman Maria Zakharova later said: "Gross violations of Syrian sovereignty -- no matter how they are justified -- are unacceptable."

President Bashar al-Assad, quoted on Thursday by SANA, said Damascus was negotiating with Moscow to buy the latest anti-missile system to repel Israeli and American attacks.

"It is natural for us to negotiate with the Russians now with a view to strengthening (our) systems, whether to face any Israeli threats from the air or the threats of American missiles," he said.

The US military fired 59 Tomahawk missiles at a Syrian airbase overnight on April 6-7 following a suspected chemical attack on a rebel-held town in Idlib province that left 87 dead, including many children.

In Israel, the army said Thursday its "Patriot Aerial Defence System intercepted a target above the Golan Heights", without elaborating.

A military spokeswoman refused to comment on Israeli media reports that the object was a drone.

Israeli warplanes have hit Damascus airport and other bases around the Syrian capital in the past, targeting what it said were weapons stockpiles destined for Hezbollah.

The airport, about 25 kilometres (15 miles) southeast of the city centre, was hit by Israeli air strikes in December 2014, Syrian state media reported at the time.

Israel does not usually confirm or deny each individual raid it carries out.

But last month, it said it had conducted several strikes near the Syrian desert city of Palmyra, targeting what it said were "advanced weapons" belonging to Hezbollah.

The strikes prompted Syria to launch ground-to-air missiles, one of which was intercepted over Israeli territory in the most serious flare-up between the two neighbours since the Syrian civil war began six years ago.

On January 13, Syria accused Israel of bombing Mazzeh airbase in the western suburbs of the capital. There were several strikes near the same base last year.

Israel and Syria are still technically at war, though the armistice line on the Golan Heights had remained largely quiet for decades until the Syrian conflict began.