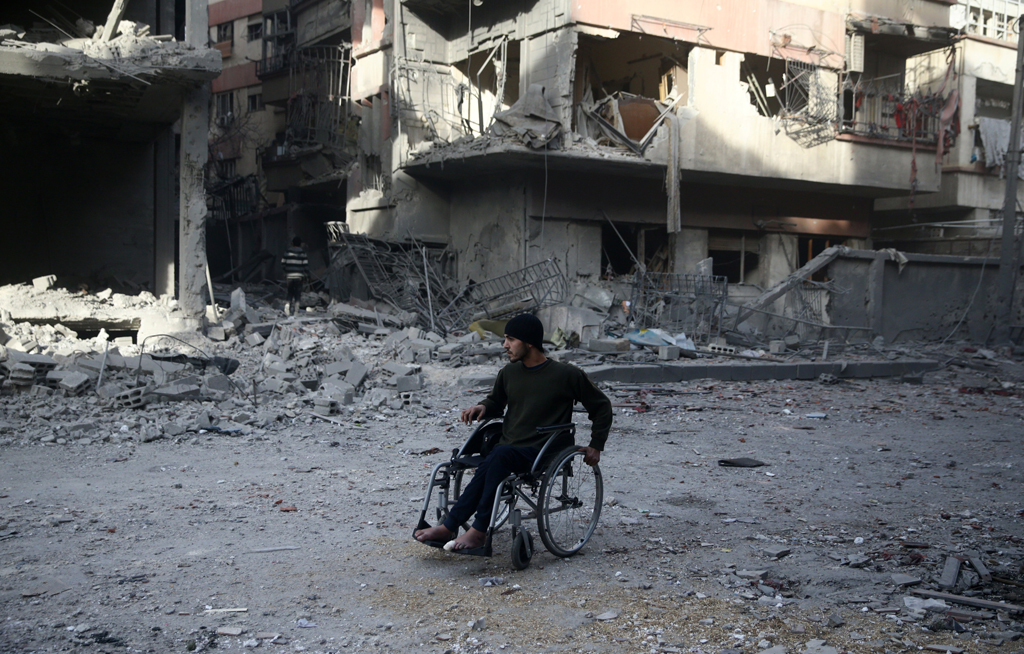 A man in a wheelchair is seen at a damaged site after an airstrike in the besieged town of Douma, Eastern Ghouta, Damascus, Syria February 9, 2018.

DAMASCUS - Fighting has only worsened in Syria in the week since the United Nations called for a month-long ceasefire, the UN&39;s humanitarian coordinator in Damascus warned on Monday.

The UN made an urgent plea on Tuesday last week for warring sides in Syria to temporarily lay down their arms to allow for aid deliveries to desperate civilians.

The UN Security Council failed to back the appeal last week but was to consider a new draft on a 30-day pause on Monday.

READ: Turkey has told US troops to pull out of Syrian town

Hours before the talks, the UN&39;s humanitarian coordinator in Syria, Ali al-Zaatari, renewed the plea.

"Since our statement of 6 February, when the UN representatives in Syria called for a one-month cessation of hostilities, the situation has worsened," Zaatari said in an emailed statement.

"We are witnessing some of the worst fighting of the entire conflict, with reports of hundreds of civilian deaths and injuries, massive displacement and the destruction of civilian infrastructure, including medical facilities," he added.

Over the past week Syrian government planes have pounded the opposition-held enclave of Eastern Ghouta near Damascus, as rebels fired rockets and mortars on the capital.

A Turkish-led offensive in northwest Syria has continued to displace families along the northern border.

"We keep stressing our message, that this terrible suffering of the Syrian people must stop. They have already borne the brunt of this brutal conflict," Zaatari said.

"I am again appealing to all parties, and those with influence over them, to listen to us and to the affected population: end this intolerable human suffering," he said.

Negotiations are to begin in New York on Monday on a new draft presented by Sweden and Kuwait demanding a 30-day ceasefire and an end to sieges. Diplomats said it could quickly come to a vote at the Security Council.

But it remained unclear whether Russia -- which has repeatedly used its veto to protect its ally President Bashar al-Assad -- would block the action.

More than 13.1 million Syrians are in need of humanitarian aid, including 6.1 million who have been displaced within the country during the nearly seven-year war.