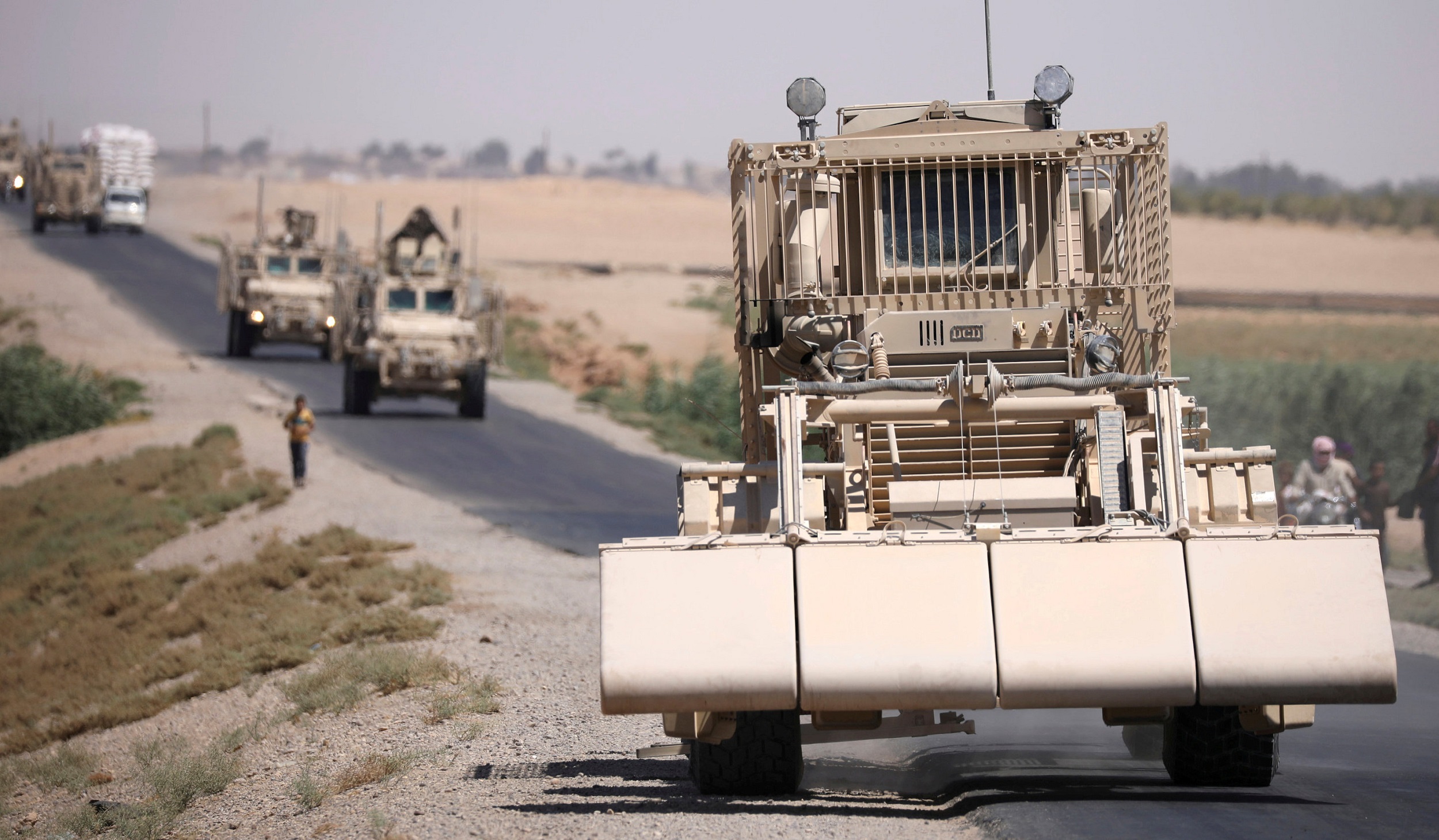 A US military demining vehicle leads a convoy on the main road in Raqqa, Syria July 31, 2017.

More than 40 trucks loaded with aid were unable to reach the 400,000 people living in the battered enclave, prompting fresh calls for a United Nations ceasefire to be implemented.

A five-hour daily "pause" announced by Moscow on Monday has led to a reduction in the bombardment that killed hundreds in only a few days and sparked global outrage last month.

But a corridor offered by Russia for civilians to flee remained ostensibly empty for a third day running, with distrust running high on both sides.

Jan Egeland, the head of the UN&39;s humanitarian taskforce for Syria, said he hoped aid convoys may be able to go to Eastern Ghouta "in the next few days".

"We may have the first facilitation letter, permit from the government, to go to (the main Eastern Ghouta town of) Douma in a very long time," he said while stressing "five hours is not enough" of a window.

Syrian aircraft carried out strikes Thursday before the 9:00 am start of the daily "truce", killing nine civilians, according to the Syrian Observatory for Human Rights, a Britain-based war monitor.

Ground battles were also taking place in Al-Shaifuniyah which lies in the enclave&39;s northeastern region and has been extensively destroyed in recent days.

A spokesman for the Syrian Civil Defence volunteer rescuers, known as the "White Helmets", said access to the area had been very difficult.

"There is hardly any life there. It is completely destroyed and there are people under the rubble," Siraj Mahmud told AFP.

The Russian daily "pause" falls far short of a 30-day ceasefire voted for by the United Nations Security Council on Saturday and yet to be implemented.

"We do not seek a conflict with the Syrian regime, but we call on Russia to restrain the Assad regime, de-conflict counterterrorism operations with the coalition, and de-escalate the remaining battlefields of the Syrian civil war."

Washington is asking the UN Security Council to set up a new inquiry of chemical weapons attacks in Syria following reports of suspected chlorine use in Eastern Ghouta, according to a draft resolution obtained by AFP on Thursday.

The Syrian government has denied using chemical weapons and Russia has questioned UN findings that it carried out sarin and chlorine attacks.

It was unclear when the US proposal, or a separate Russian draft resolution, on the Syrian chemical inquiry, would come to a vote.

The Observatory said a child suffocated to death and 13 other people fell ill from a suspected chlorine attack on Sunday in the besieged enclave.

A joint Syrian and Russian air campaign, which was launch on 18 February, killed up to 100 civilians a day until the Russian "humanitarian pause" was announced this week.
But the death toll has continued to mount.

In the town of Hazeh, rescuers working with rudimentary equipment were painstakingly hoisting buckets of gravel from a basement where they feared up to 21 were buried alive by a strike on 20 February.

They have only retrieved six bodies so far.

"I left my daughter in the basement with her husband and his family," said 60-year-old Abu Mohamed.

"I came back the next morning. I found the building collapsed and until now I haven&39;t found my daughter nor her husband&39;s family."

According to the UN, three-quarters of all private housing in Eastern Ghouta have been damaged and hundreds of civilian need life-saving medical evacuations.

Moscow and Damascus accused anti-regime forces in Eastern Ghouta of deliberately shelling the designated safe passage to prevent civilians from leaving and keep them as human shields.

"Over the last three days, people have failed to leave the Eastern Ghouta. Illegal armed formations have taken people hostages and do not let them leave the danger zones," a Russian military statement said, claiming "dozens" of civilians tried to leave Thursday.

AFP journalists at the Wafideen checkpoint through which civilians were asked to evacuate the enclave said no movement was reported, however.

The only civilians believed to have fled since the "pause" took effect are an elderly Pakistani couple who had remained in Ghouta throughout the seven-year conflict but decided to leave when the violence increased.

He and his wife, who left on Wednesday and were given shelter at the Pakistani embassy in Damascus, leaves two sons, three daughters and 12 grandchildren behind.

"I hope God protects them," Akram told AFP reporter in the main eastern Ghouta town of Douma this week.