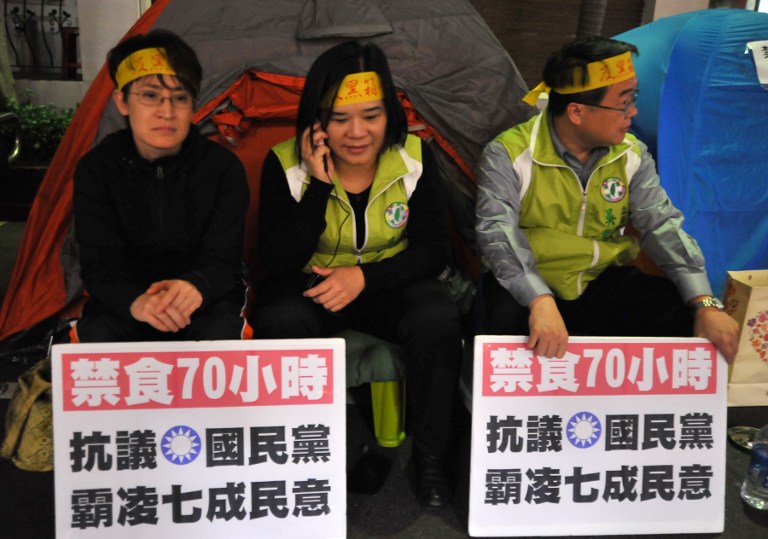 Members from the opposition Democratic Progressive Party (DPP) during their hunger strike at the Taiwanase parliament as it prepares to pass trade and services agreements with China during a parliamentary session in Taipei.

TAIPEI - Hundreds of protesters in Taiwan opposed to a trade pact with China which they fear gives the mainland too much economic influence and access to opportunities have occupied Taiwan&39;s legislature.

The protesters burst into the legislative chamber late on Tuesday and repulsed police efforts to evict them, media said.

The students said they were demanding an apology to the Taiwan people from President Ma Ying-jeou for the trade pact and that an initial review of the pact by the ruling Kuomintang (KMT) party be scrapped.

The KMT said this week its initial review of the pact had been completed despite opposition party concern about the mainland&39;s growing influence on the Taiwanese economy.

China and Taiwan have been ruled separately since Nationalist forces, defeated by the Communists, fled to the island at the end of the Chinese civil war in 1949.

China considers Taiwan a renegade province and has never ruled out the use of force to bring it under its control.

But in recent years, the two sides have built up extensive economic ties, and in February they held their first direct government-to-government talks, a big step towards expanding cross-strait dialogue beyond trade.

Taiwan&39;s opposition Democratic Progressive Party, which has vowed to protect the island&39;s economy from excessive Chinese influence, has said it would vote against the deal although it lacks numbers to block its passage.

A political analyst said the protest would not derail the deal.

"I don&39;t think this is going to threaten the overall passage of the pact, though it may delay it a bit," said Lu Ya-li, a professor of political science at Taipei&39;s Chinese Culture University.

"But this pact is too important for Taiwan&39;s economy -- it will pass regardless."

The students are worried the pact would lead to an influx of mainland students into Taiwan universities, which could threaten opportunities for scholarships and jobs, he said.

The protesters were predominantly guided by political ideology and did not represent the majority of Taiwan students, he said.

Mainland China is the island&39;s biggest trading partner and the two sides have signed a slew of agreements on everything from transport to tourism since Taiwanese President Ma Ying-jeou took office in 2008.

Under the latest trade pact, China will open 80 of its service sectors to Taiwanese companies, while Taiwan will allow mainland investment in 64 sectors.