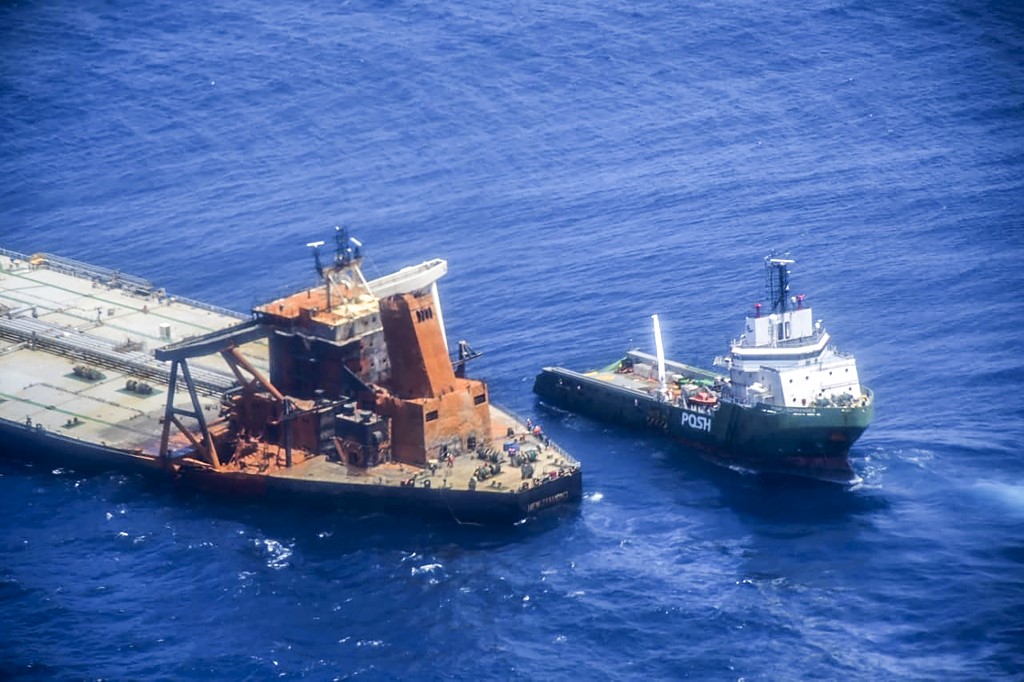 This handout picture taken on September 10, 2020, and released by Sri Lanka Air Force shows the Posh Commander, a tug boat from the Dutch recovery company SMIT, arrives next to the Panamanian-registered crude oil tanker New Diamond on the Indian Ocean off Sri Lanka's eastern coast.

COLOMBO - International experts boarded an oil tanker stricken off Sri Lanka to begin salvage operations, the navy said on Thursday, as firefighters looked to contain a large oil slick in the Indian Ocean.

A huge week-long blaze aboard the New Diamond was finally extinguished on Wednesday and though 270,000 tonnes of crude oil were unaffected officials said, diesel fuel had leaked into the water, creating a significant and expanding slick.

"We are taking a step back and now it is up to the owners to decide how they want to take it from here."

Officials said the fuel slick had reached 2 kilometres in length after doubling in size overnight, as the tanker drifted around 20 kilometres north of its Wednesday location.

The tanker is tied to a tug and keeping a distance of just under 100 kilometres from Sri Lanka's shoreline.

The salvage experts who boarded the vessel reported that toxic gases had filled the stern section of the ship and that they will be removed using air blowers, Sri Lanka's navy said.

A powerful tug boat commissioned by the Dutch salvage company SMIT arrived from Singapore on Thursday to boost their efforts, it added.

The tug has specialised equipment to drain the sea water -- used to flood the engine room during the firefight -- and remove the gases.

It was not immediately clear what the salvage company would do with the Panamanian-registered tanker, but Sri Lankan authorities have asked them to tow it away from the island's waters.