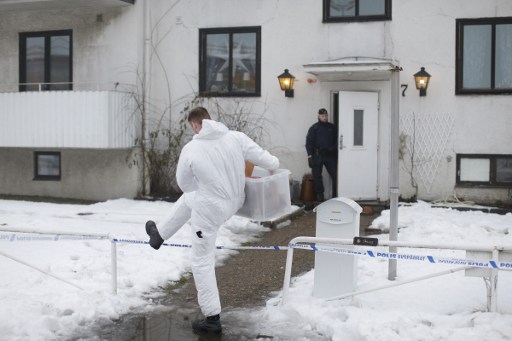 Police investigators are seen outside a home for juvenile asylum seekers in Molndal in south western Sweden on January 25, 2016 A 22-year-old female employee was killed in a knife attack at the center for migrant youths traveling alone the police said.

The teen, identified in court documents as Youssaf Khaliif Nuur, had been charged with murder but the district court in the southwestern town of Gothenburg found him guilty of involuntary manslaughter and aggravated assault.

"Youssaf Nuur, through his heedless behaviour, caused Alexandra Mezher&39;s death. He is therefore guilty of involuntary manslaughter," the court wrote.

A court-ordered examination found Nuur was mentally unstable, and this may have meant that he did not know that the stabs to Mezher&39;s thigh would cause her to bleed to death, the court said.

Mezher, a 22-year-old of Lebanese origin, was stabbed as she tried to break up a fight in the centre for unaccompanied minors.

Nuur also attacked another person who tried to help Mezher, resulting in the conviction for aggravated assault.

Nuur neither denied nor admitted the events, telling the court he had no memory of what had happened.

After undergoing psychiatric care, Nuur was ordered deported from Sweden and banned from returning before 2026.

Nuur&39;s exact age has not been determined. He told the court he was 15, but the prosecution argued that he was at least 18. After examining bone x-rays and dental records, the court sided with the prosecution.

A lawyer for Mezher&39;s family, Hans Gaestadius, told news agency TT they were "disappointed" by the verdict as they had hoped for a murder conviction, and they planned to appeal.

The January 25 killing sparked outrage in Sweden amid a flare in violence linked to the migrant crisis, especially at overcrowded reception centres.

According to the Swedish Migration Agency, the number of threats and violent incidents at asylum facilities more than doubled from 2014 to 2015 as Sweden witnessed a record number of migrant arrivals.

A country of 9.8 million, Sweden took in more than 160,000 asylum seekers in 2015, putting it among the EU states with the highest proportion of refugees per capita.

It has since tightened its asylum rules, which has curbed the migrant flow drastically.

After the killing, questions were raised about safety at the reception centre, where Mezher had been working alone at the time of her death.

But a study by the Health and Social Care Inspectorate -- a government agency responsible for supervising health care and social services -- found no shortcomings in routines.

However, the company that runs the centre no longer allows employees to work alone.