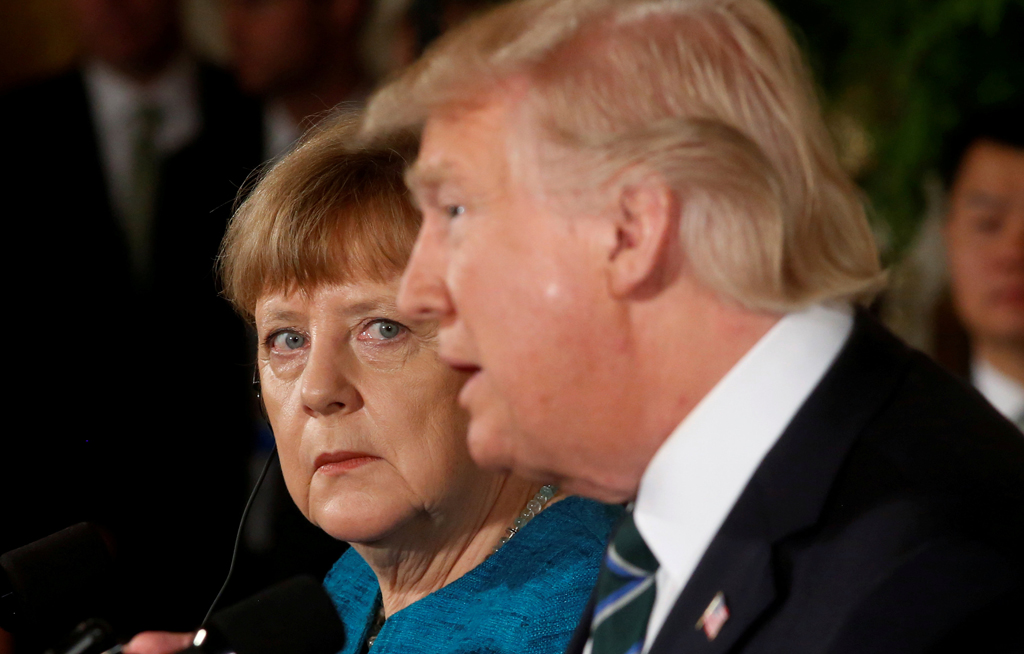 Germany's Chancellor Angela Merkel and U.S. President Donald Trump hold a joint news conference in the East Room of the White House in Washington, US, March 17, 2017.

WASHINGTON - Stark differences between President Donald Trump and German Chancellor Angela Merkel on everything from trade to immigration were in full view during an icy first meeting at the White House Friday.

In a frequently awkward joint press conference, Trump and Merkel showed little common ground as they addressed a host of thorny issues including NATO, defence spending and free trade deals.

For most of the 30 minutes in the East Room, Merkel was stony-faced as Trump ripped into Washington's NATO allies for not paying for their "fair share" for transatlantic defence and demanded "fair and reciprocal trade" deals.

The veteran German chancellor had arrived at a snowy White House, hoping to reverse a chill in relations after Trump's incendiary election rhetoric.

The visit began cordially, with the pair shaking hands at the entrance of the White House.

But later, sitting side-by-side in the Oval Office, Merkel's suggestion of another handshake went unheard or ignored by Trump -- an awkward moment in what are usually highly scripted occasions.

This is what the awkward photo op between Angela Merkel and Donald Trump looked like https://t.co/Nb6wRjWWUc pic.twitter.com/jnS4RzFDky

There was never going to be an easy rapport between the cautious German chancellor and impulsive US president.

For years, Merkel -- a trained physicist -- had been president Barack Obama's closest international partner, with the two sharing a strong rapport and a similar deliberative approach.

Before coming to office in January, Trump had set the tone by calling Merkel's acceptance of refugees a "catastrophic mistake" and suggestion she was "ruining Germany."

In a similar vein, Merkel has sought to remind -- some in the White House would say lecture -- the real estate mogul about democratic values.

Comments like that have prompted some of Trump's fiercest critics to declare Merkel the new "leader of the free world" -- a moniker normally taken up by the occupant of the White House.

During the press conference, Merkel said "it's much, much better to talk to one another and not about one another, and I think our conversation proved this."

But even the lighter moments were tinged with tension.

Amid a furore over Trump's unfounded allegations that he was wiretapped by Obama, the new president cracked a joke referring to past revelations that Merkel's phone had also been bugged by his Democratic predecessor.

"As far as wiretapping, I guess, by this past administration, at least we have something in common perhaps," he said.

Merkel appeared not to find the humour in what had been a major political scandal.

And neither side tried to make small talk about Trump's own background.

His family hails from Kallstadt, a tidy village nestled in southwest Germany's lush wine country. His grandparents left for America more than a century ago fleeing poverty and later, after a brief return, trouble with the law.

Although Trump has tempered his criticism of NATO and the personal attacks against European leaders, officials still fret that Trump has too closely embraced the nationalist ideology of key advisor Steve Bannon.

Bannon has championed trade protectionism and opposed the European Union and other multilateral institutions that underpin the world order.

Trump on Friday pledged to "respect historic institutions" but Bannon, also in the East Room, gave a chuckle as Merkel was asked whether she believed Trump had lied and treated the European Union disrespectfully.

Trump insisted he was not isolationist, saying: "I'm a free trader but also a fair trader."

Merkel rejected Trump's suggestion that individual European countries should negotiate free trade deals with the United States, rather than under existing EU-US negotiations.

"I hope we can come back to the table and talk about the agreement" between the EU and US, she said.