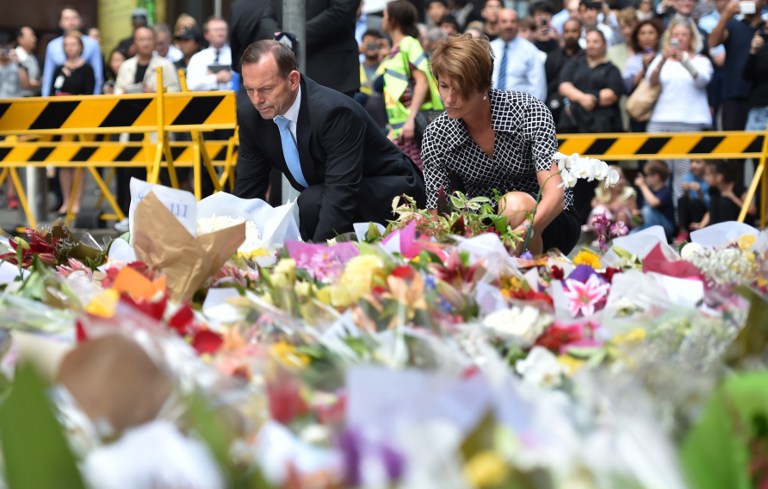 Australian Prime Minister Tony Abbott (L) and his wife Margaret lay wreaths at a makeshift memorial near the scene of a fatal siege in the heart of Sydney's financial district on December 16, 2014.

SYDNEY - Australian Prime Minister Tony Abbott on Tuesday warned of a heightened level of "terrorist chatter" in the aftermath of the fatal Sydney cafe siege.

"A briefing from the security agencies today indicated that there has been a heightened level of terrorist chatter in the aftermath of the Martin Place siege," he said following a meeting of his National Security Committee.

"We don&39;t know when and how an attack may come, but we do know there are people with the intent and the capability to carry out further attacks."

Iranian-born gunman Man Haron Monis, who had a history of extremism and violence, took 17 hostages in the city&39;s financial heartland last week, unveiling an Islamic flag and demanding to talk to Abbott.

He was killed as armed police stormed the eatery after 16 hours. Two hostages also died -- mother-of-three Katrina Dawson, 38, and 34-year-old Lindt cafe manager Tori Johnson -- while several others were injured.

Abbott did not raise Australia&39;s terror alert level beyond its current high, but cautioned that "at this level, an attack is likely".

"I am alerting people to the fact that the terror threat remains high and as you all understand, at this level, an attack is likely," he said.

"That&39;s why it&39;s important that people remain alert and aware as well as reassured that our police and security agencies are doing everything they humanly can to keep us safe."

Australia raised its threat level in September as it carried out a series of counter-terrorism raids across Sydney and Brisbane following a flow of its nationals to Iraq and Syria to fight with the Islamic State group and other jihadists.

At high, a terrorist attack is seen as likely. An extreme alert level means an attack is imminent or has occurred.

Australia has not officially branded the Sydney seige as a terrorist attack.

Abbott said we was "not going to speculate" about any specific future attacks, emphasising only that "there has been a heightened level of chatter amongst people who we would normally think of as terrorist sympathisers".