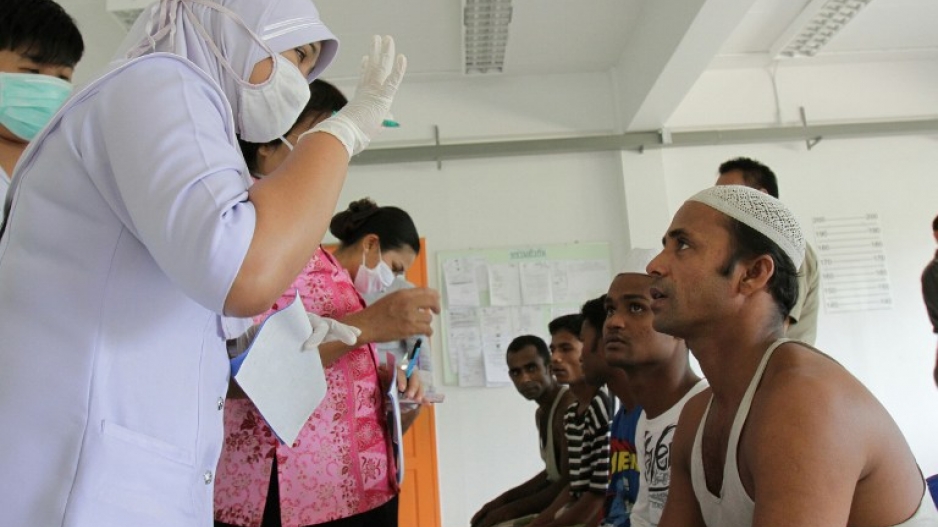 A Rohingya migrant receives a health examination at a detention centre in Songkhla's Sadao district 15 January 2013.

Bangkok - A policeman has been charged with trafficking after a Rohingya woman was allegedly lured from a shelter in southern Thailand and subsequently raped by a man from the refugee Muslim minority, police said Friday.
It is believed to be the first time a Thai official has been charged with trafficking of Rohingya boat people, despite probes into alleged people smuggling by authorities including the army.
The officer is accused of driving the 25-year-old victim along with her daughters, aged 12 and nine, and two other women, from the shelter in Phang Nga in late May.
The woman was told she would be taken to Malaysia to be reunited with her husband, who is also from the minority group, but was instead held at several places in the region in an ordeal lasting several weeks, police said.
The woman was allegedly raped repeatedly by the Rohingya man, believed to have worked as a translator at the shelter, who has been charged for the assault.
The victim and her children were found on a roadside and returned to the shelter last week when she contacted the police.
"The officer has been charged with taking part in human trafficking and abuse of his position", Police Colonel Weerasin Kwansaeng, commander of Kuraburi Police Station said.
"The victim said he drove the car from the shelter," he said, adding it was the first time charges had been brought against police over the trafficking of Rohingya.
Dozens of Rohingya women and children who fled communal violence in Myanmar, are housed at the shelter while hundreds of men from the ethnic group are being held at an immigration detention centre in the same province.
Rights groups have repeatedly voiced concerns over the treatment of destitute Rohingya refugees by Thai authorities, saying they are held in poor conditions and are vulnerable to exploitation.
The rape "demonstrates the vulnerability of Rohingya women to human traffickers - even when they are living in government-run shelters where they should be protected," said Brad Adams, Asia director at Human Rights Watch.
In January Thai authorities opened an investigation into allegations that army officials were involved in trafficking Rohingya.
Around 2,000 Rohingya refugees remain in detention in Thailand while authorities wait for a third country to offer to accept them.
Described by the UN as among the most persecuted minority groups in the world, Rohingya have for years trickled abroad to neighbouring Bangladesh and, increasingly, to Muslim-majority Malaysia.
Myanmar views its population of roughly 800,000 Rohingya as illegal Bangladeshi immigrants and denies them citizenship.
A explosion of tensions between Buddhist and Muslim communities in Myanmar&39;s western state of Rakhine since June 2012 has triggered a huge exodus of Rohingya, mostly heading for Malaysia.