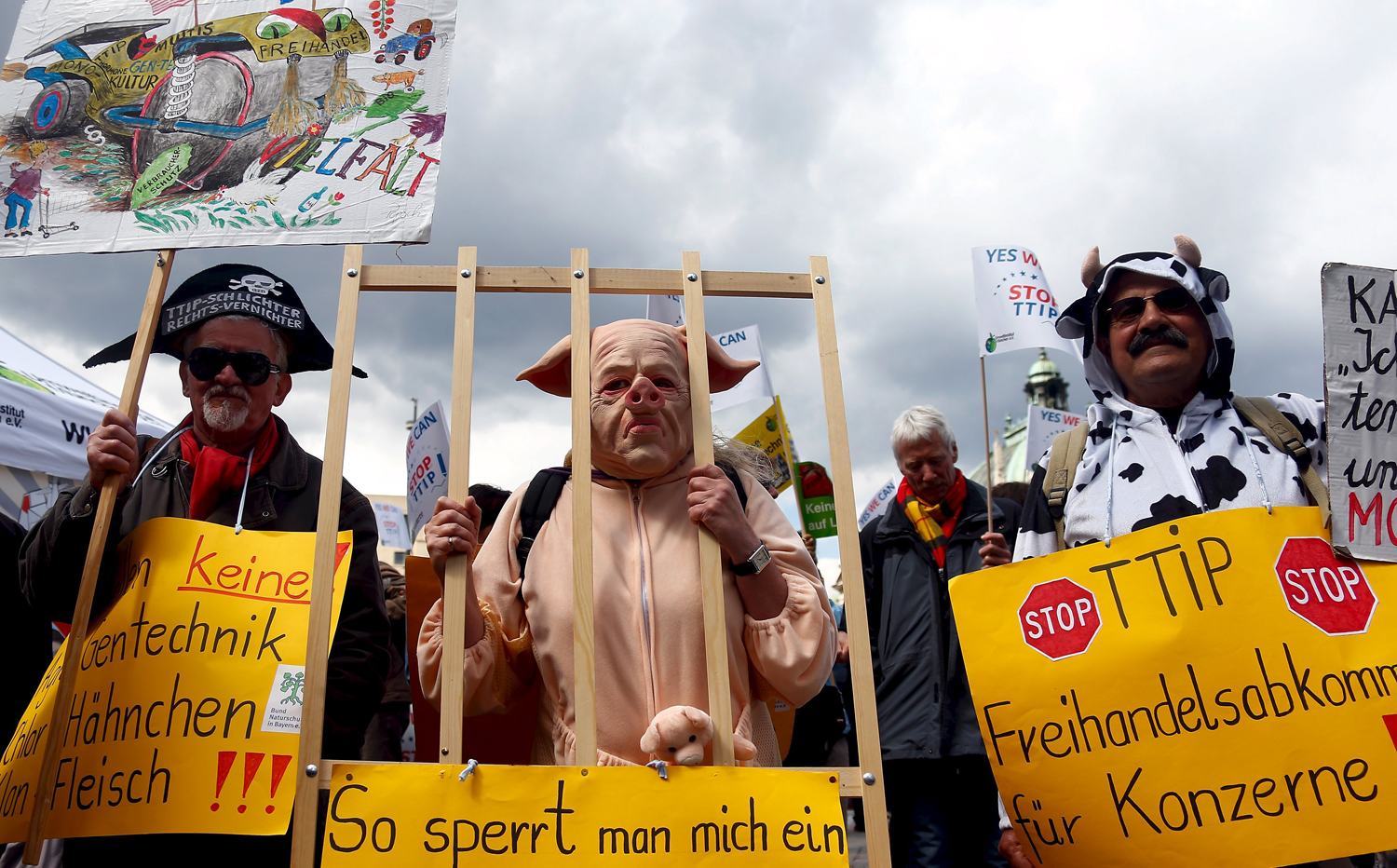 People dressed in costumes take part in a demonstration against the Transatlantic Trade and Investment Partnership (TTIP), a proposed free trade agreement between the European Union and the United States, in Munich April 18, 2015.

BERLIN - Thousands of people marched in Berlin, Munich and other German cities on Saturday in protest against a planned free trade deal between Europe and the United States that they fear will erode food, labour and environmental standards.

Opposition to the Transatlantic Trade and Investment Partnership (TTIP) is particularly high in Germany, in part due to rising anti-American sentiment linked to revelations of US spying and fears of digital domination by firms like Google.

A recent YouGov poll showed that 43 percent of Germans believe TTIP would be bad for the country, compared to 26 percent who see it as positive.

The level of resistance has taken Chancellor Angela Merkel&39;s government and German industry by surprise, and they are now scrambling to reverse the tide and save a deal which proponents say could add $100 billion in annual economic output on both sides of the Atlantic.

In Berlin, a crowd estimated by police at 1,500 formed a human chain winding from the Potsdamer Platz square, past the US embassy and through the Brandenburg Gate to offices of the European Commission.

In Munich, police put the crowd at 3,000, while organisers Attac estimated it at 15,000. Hundreds also marched in Leipzig, Stuttgart, Frankfurt and other European cities on what Attac hailed as a "global day of action" against free trade, though the protests appeared to be largest in Germany.

"I think this deal will open the door to genetically-modified foods here," said Jennifer Ruffatto, 28, who works with handicapped people and was pushing her baby in a stroller. "Companies will gain from this at the expense of people."

Helmut Edelhauesser, a 52-year-old from Brandenburg, said he would prefer a free trade deal with Russia.

"The US push for world domination is unacceptable," he told Reuters. "Obama sends out drones to kill people and wins the Nobel peace prize. This has to stop."

Marchers held up posters reading "People have a right to food not profits" and "Beware the TTIP trap - companies win, people lose!"

After the excesses of the Gestapo secret police under the Nazis and the Stasi in communist East Germany, Germans are also particularly sensitive to official surveillance. Revelations in 2013 that the US had bugged Merkel&39;s mobile phone provoked outrage across the country.

Merkel has spoken out repeatedly in favour of TTIP, but her coalition partners, the centre-left Social Democrats (SPD), are deeply divided. Their leader Sigmar Gabriel, the economy minister and a TTIP convert, has promised a formal party vote on any deal.